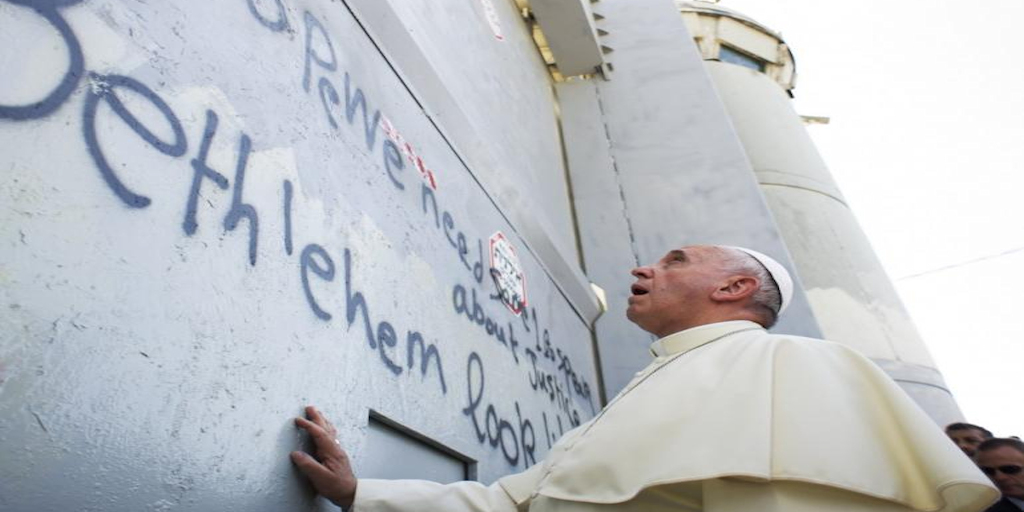 Pope Francis touches Israel's wall on his way to celebrate a mass in the Palestinian West Bank city of Bethlehem May 25, 2014 (REUTERS/Osservatore Romano)

November 28, 2017 (Ramallah, Occupied Palestine) — Today, two of the most prominent Palestinian Christian networks joined the calls on Pope Francis to refuse Israeli prime minister Benjamin Netanyahu’s invitation to launch the Giro d’Italia in Israel next May. The endorsements come the day before the official race presentation in Milan on November 29, coinciding with the United Nation’s International Day of Solidarity with the Palestinian People.

The National Coalition of Christian Organizations in Palestine (NCCOP) and the Palestinian Christian Initiative "Kairos Palestine" endorsed an open letter from Palestinian civil society groups urging the Pope not to give his blessing or lend his name in any way to the 2018 edition of the premier cycling event due to the organizers “unfortunate insistence on whitewashing Israel’s military occupation and grave human rights violations.”

The signatories recall the Pope’s concern on “maintaining the honesty of sport, of protecting it from the manipulations and commercial abuse” and note that Giro d’Italia, in exchange for millions of dollars from the Israeli government, is “actively aiding Israel in falsely portraying occupied Palestinian East Jerusalem as part of Israel and its unified capital” and “working with a company that is active in illegal Israeli settlements.”

Giro d’Italia is reinforcing Israel's illegal claim of sovereignty over the city of Jerusalem as a whole by displaying images, maps and videos, including of the Al Aqsa Mosque and the church of St. Mary of Agony, as part of Israel, at a time when the Vatican, Italy, the EU, the UN and the whole world do not recognize Israel's sovereignty over East Jerusalem and do not recognize any part of Jerusalem, East or West, as Israel's capital.

The letter also recalls the Pope’s call for a “commitment to ensure that sport is always more inclusive and that its benefits are truly accessible to all.” The signatories note that “Israel repeatedly violates this principle” by bombing and destroying Palestinian sports structures,  routinely denying freedom of movement to Palestinian athletes, imprisoning and shooting Palestinian athletes, and killing Palestinian children playing football, on more than one occasion.

Netanyahu’s invitation was hand delivered by Sylvan Adams, the Canadian billionaire funding the Israeli cycling team, which is vying for one of four wildcard slots to participate in the Giro d’Italia. Just days before the Giro d’Italia is to take place next year, the Israeli team will participate in a race that goes through occupied East Jerusalem to the illegal settlement of Pisgat Ze’ev.

Kairos Palestine is a Christian Palestinian movement that launched the Kairos Document in 2009 and is “inspired by the liberation theology, especially in South Africa where a similar document was issued at a crucial time in the struggle against apartheid.”

About 200,000 Christian Palestinians currently reside in historic Palestine, descendants of some of the oldest Christian communities in the world. As an integral part of the Palestinian people subjected to half a century of Israeli military occupation and nearly 70 years of ongoing dispossession and apartheid, they suffer from widespread official and unofficial Israeli discrimination and hate crimes, whether they are citizens of Israel, live under Israeli military rule or have been rendered refugees denied their right of return to their homeland.

Hundreds of cyclists participated in bike rallies throughout Italy over the weekend, calling on Giro d’Italia organizers to move the race start from Israel.