December 15, 2022
/ By
Palestinian Campaign for the Academic and Cultural Boycott of Israel (PACBI)
/

Last year we pledged #NoRestForPUMA until it ends complicity in Israeli apartheid. We’re keeping that pledge. Groups in dozens of cities around the world will join the Boycott PUMA Global Day of Action. Make sure your group is one of them! 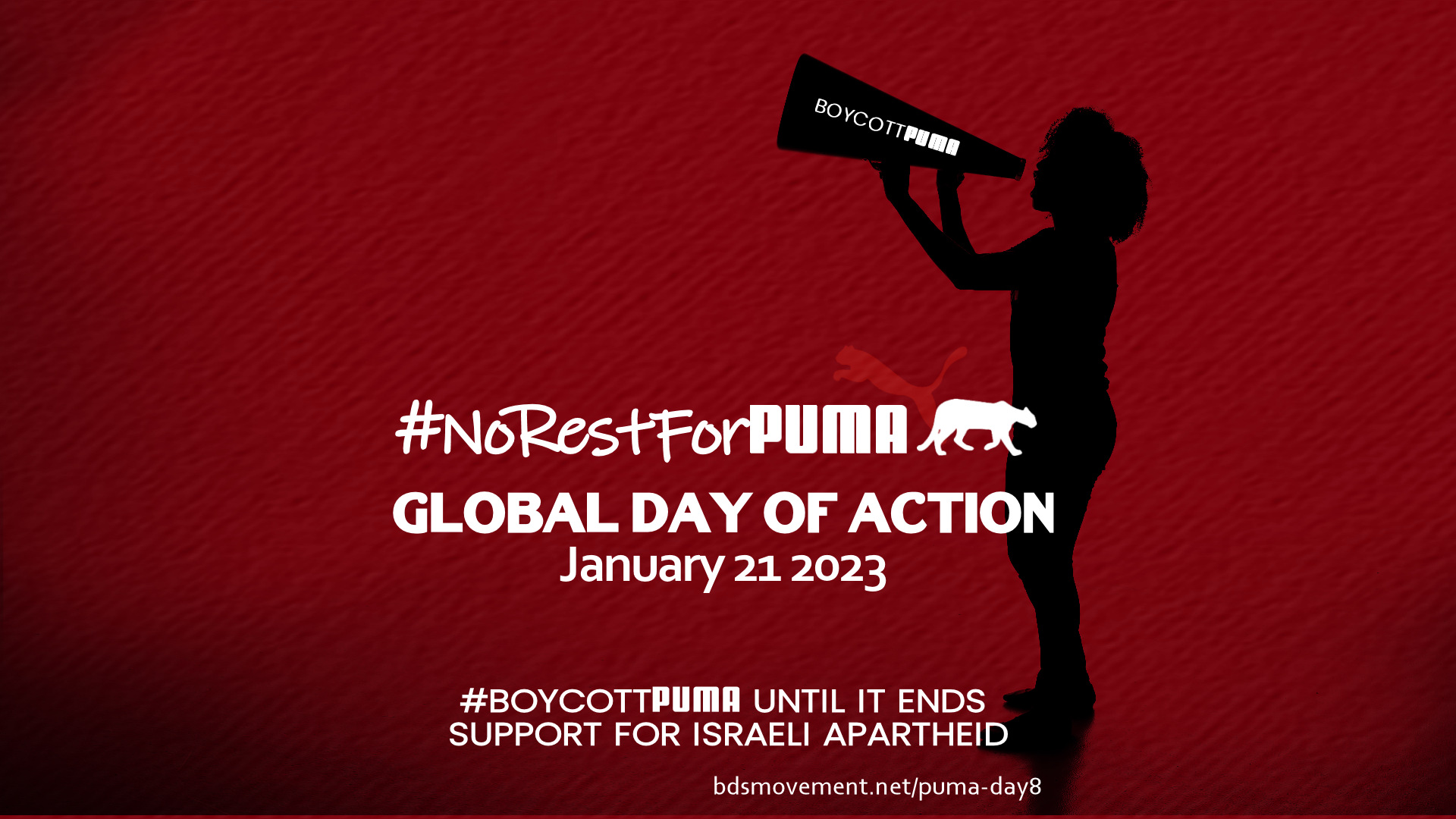 Making headlines across the globe, Palestinian rights have been front and center at the men’s World Cup.

Football fans have been chanting and flying the Palestinian flag outside the stadiums, in the stands, and even on the pitch. On social media they are calling out the hypocrisy of sporting bodies like FIFA and companies like PUMA and their complicity in Israeli apartheid.

It has been an extraordinary show of solidarity from the world of sports. It caps off a year that saw star athletes across sports denounce the hypocrisy of immediate Western sporting sanctions on Russia over its illegal aggression against Ukraine while continuing to support and whitewash Israel’s decades long record of war crimes. This racist double standard puts to rest the ludicrous notion that sport is above politics.

For Palestinians, it is a ray of hope in what was yet another deadly year under Israel’s regime of settler-colonialism, military occupation and apartheid.

Let’s build on that hope and make 2023 the year that PUMA ends support for Israeli apartheid!

We’re kicking off the year with a global day of action on Saturday, January 21. Join us!

Register your group for the Boycott PUMA Global Day of Action

PUMA may have a new CEO, but it’s the same old story as far as its complicity in Israeli apartheid goes.

PUMA sponsors the Israel Football Association, which not only governs teams in illegal Israeli settlements on stolen Palestinian land, it also actively advocates to maintain them, including via the corrupt FIFA.

PUMA is feeling the pressure. Just a few weeks ago the Oakland Roots Sports Club in California became the latest professional team – first in the US – to drop PUMA following a year of engagement with local grassroots groups and fan clubs.

Last year we pledged #NoRestForPUMA until it ends complicity in Israeli apartheid. We’re keeping that pledge.

Let’s send the new CEO a message. As long as PUMA profits from Israeli apartheid, we will continue to escalate our global boycott campaigns.

Groups in dozens of cities around the world will join the Global Day of Action. Make sure your group is one of them!