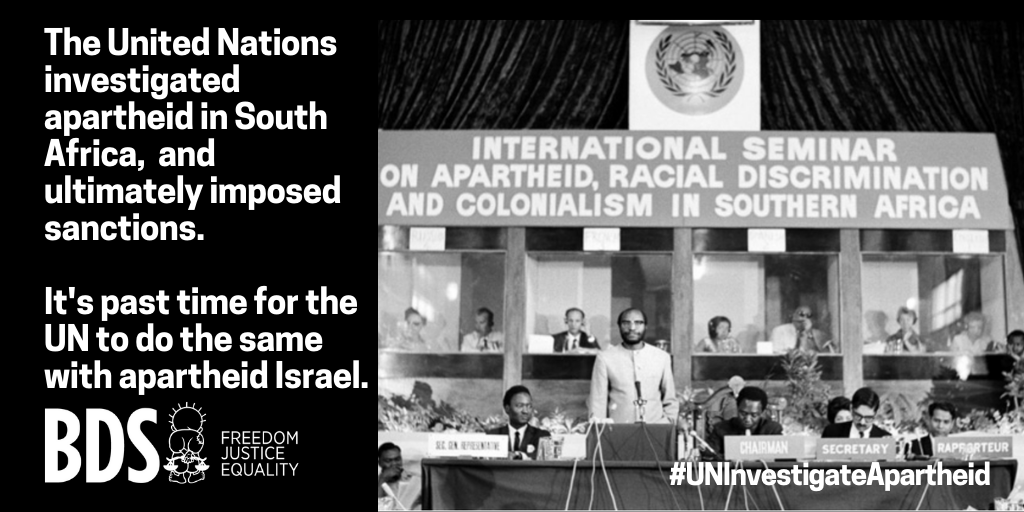 Take action and ask the UN to open an investigation

Palestinian civil society is calling for lawful and targeted sanctions by all States to stop Israeli apartheid and illegal annexation of Palestinian land. In response, last September, more than 450 civil society groups worldwide launched a global campaign calling on the UN to assume its responsibility for investigating and eradicating Israeli apartheid, as it did with apartheid in Southern Africa.

Now you can take two important steps and join their voices against apartheid and racial discrimination. Let the UN know that we are millions calling for justice and accountability!

“The General Assembly of the United Nations played a central role in the successful dismantling of apartheid in South Africa. It could, it should play an equally important role in ending Israel’s apartheid regime against Palestinians.”

-- Lakhdar Brahimi, Algerian UN diplomat and a member of The Elders

Hundreds of notable figures, intellectuals, policymakers, civil society leaders, and experts from Africa, Latin America, and Asia, including eight former presidents, have already answered the Palestinian call for justice and accountability. Initiated by the South Africa BDS Coalition, the Global South Response aims to strengthen African, Asian, and Latin American support at the UN for the Palestinian people’s call for investigating and eradicating apartheid, and to build an alliance for freedom, justice and equality. Learn more about this thrilling initiative and its supporters. Keep tuned in for upcoming events on this platform.

Sign your organization onto the call for the UN to investigate Israeli apartheid: