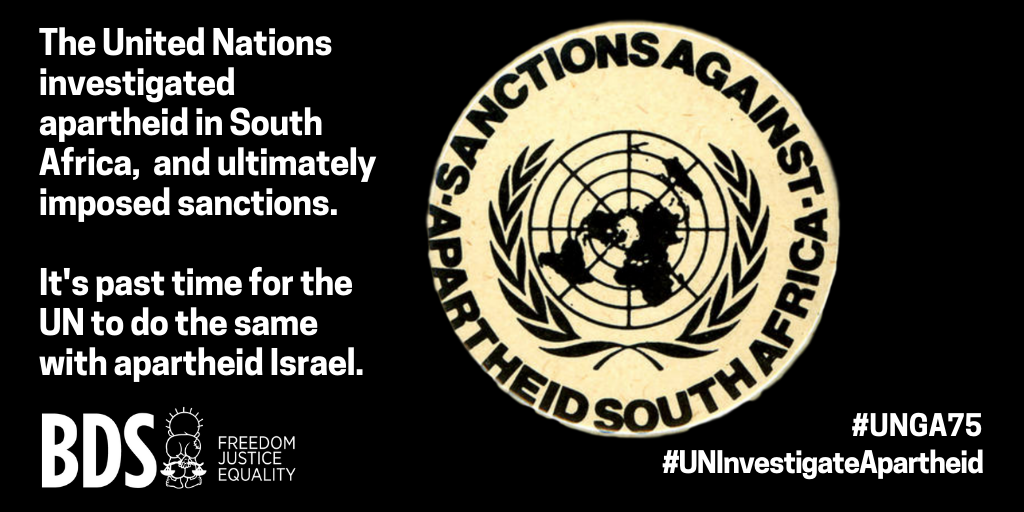 In a letter released yesterday, 452 civil society groups – unions, movements, political parties and organizations – from tens of countries around the world called on the United Nations General Assembly and its Member States, currently meeting in New York, to investigate Israeli apartheid and to impose targeted sanctions to stop Israeli apartheid and illegal annexation of Palestinian land.

The letter marks the launch of a global public campaign calling on the UN to assume its responsibility for the investigation and eradication of Israel’s apartheid regime, similar to the role it had played in ending apartheid in Southern Africa.

The global letter cites “the mounting recognition of Israel’s maintenance of an apartheid regime over the Palestinian people.” It notes that 47 independent human rights experts within the United Nations stated that the Israeli government plans to illegally annex large parts of the occupied West Bank would constitute “a vision of a 21st-century apartheid.”

Released by the Palestinian Human Rights Organizations Council, the letter supports Palestinian civil society’s May call for sanctions on Israel to stop its ongoing annexation and apartheid.

Palestinian civil society groups are organizing a global week of action from September 22 - 28 during the UNGA, focused around the hashtag #UNInvestigateApartheid.

The global letter concludes by calling on the UN and all its Member States to:

The UN established the Special Committee against Apartheid in 1962 to investigate apartheid in South Africa, and eventually imposed sanctions that contributed to ending it.

In addition to civil society groups, in the last months, prominent individuals from around the world have taken up the Palestinian call. Nine former presidents from Latin America to South Africa, along with hundreds of public figures from the Global South, have also called for targeted sanctions to stop Israel’s annexation and apartheid. Tens of Arab leaders, including former Prime Ministers, diplomats and cultural figures, have endorsed an initiative started by former UN diplomat Lakhdar Brahimi calling for sanctions on Israel in response to apartheid and ongoing annexation.