Skip to main content
In the News
This article is reposted from
Palestina Libre
, click here to read the original article.

The declaration marks the first time the highest student body of a Latin American university endorses the Palestinian campaign for the boycott of complicit Israeli academic institutions. 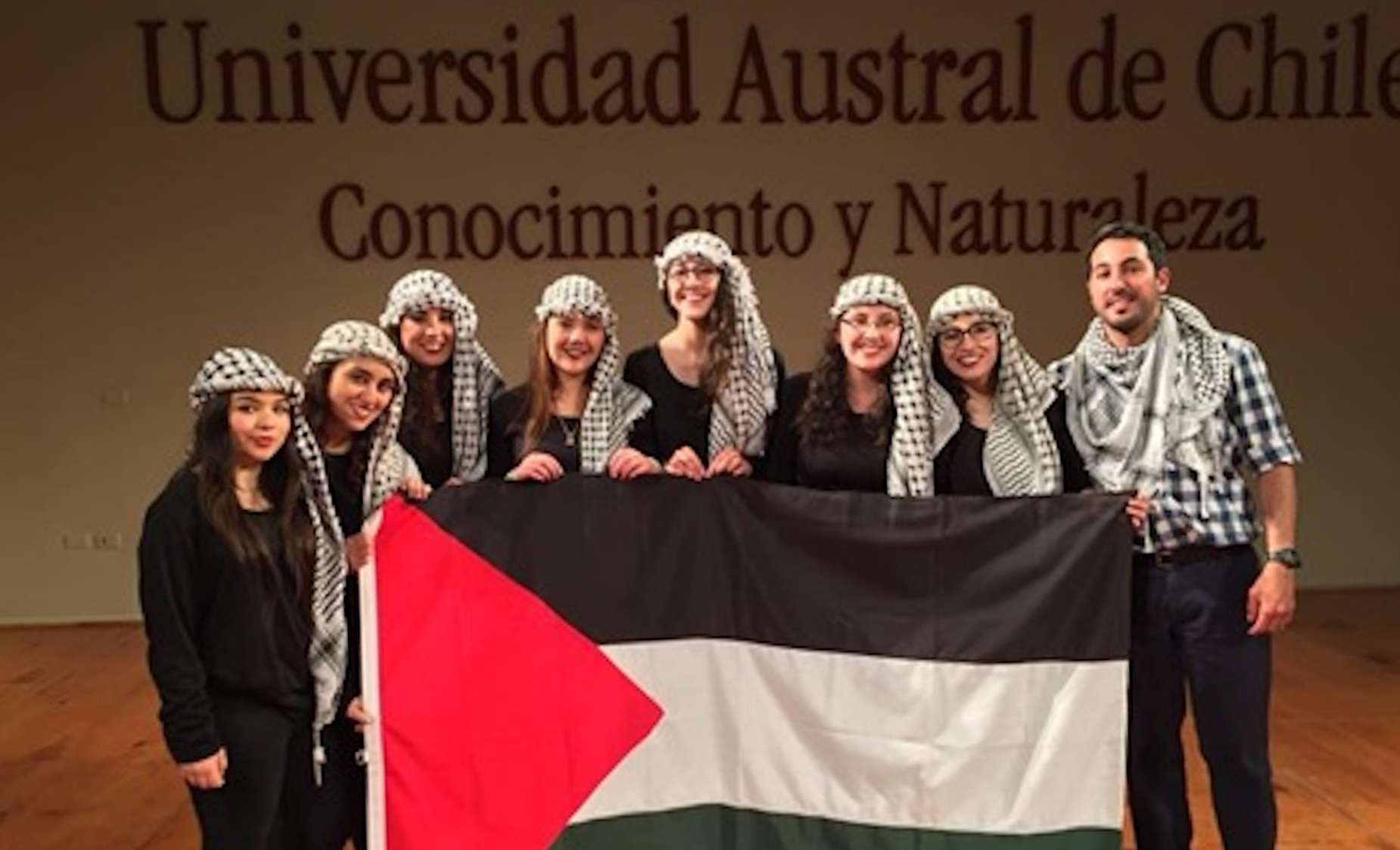 On Saturday, May 16, 2020, the Student Federation of the Austral University of Chile (FEUACh) will announce its decision to declare itself an apartheid-free zone during a live broadcast on the Facebook page of the Chilean Arab Youth from Valdivia for Palestine at 11 am Chile time. The declaration will be announced one day after the commemoration of the Nakba, as an act of remembering, a project for the present and the future, and as a tribute to a people that resists against colonialism and occupation to this day.

The declaration marks the first time the highest student body of a University in Chile and Latin America makes the decision to endorse the international campaign for the academic boycott of Israel. The decision is in harmony with the guiding principles of the Federation and the student body, which provides for a clear position against Israel’s military occupation and apartheid regime imposed on the Palestinian people. It is also a call on the highest level of the University administration to refrain from making agreements with Israel and with Israeli universities that are complicit in the violations of the human rights of the Palestinian people. The campaign will continue until the objectives are fulfilled, that is, when Israel’s military occupation is ended and the apartheid wall dismantled, the refugees’ right of return is fulfilled and equal rights are guaranteed for the Palestinian population living in Israel, which today lives with more than 50 laws of discrimination and segregation, in other words, under apartheid. Among additional actions requested of the university is to refrain from participating in the Congress of the Future, an event in collaboration with the Israeli embassy in Chile helping to whitewash Israel’s image, and to condemn Israel’s violations of the rights of the Palestinian people.

The UACh Apartheid Free campaign began in 2017 through a joint effort of the student federation and the Chilean Arab Youth of Valdivia for Palestine, under the presidency of Manuel Rauch (2017-2018) and was continued under the presidencies of Valentina Gatica Gómez (2018-2019)and Fernanda Pérez Sepúlveda (2019-2020). As part of the campaign, several informative talks were held in the Superior Council of Students and in various department and faculty assemblies in order to guarantee a democratic process in accordance with the statutes of the federation, which resulted in 36 faculties in favor of the motion. There was also awareness raising done among professors of the university, which led to more than 70 professors and staff members endorsing the UACh Apartheid Free declaration in order to support and promote the campaign. The campaign aims to put into practice the United Nations Global Compact signed by the Austral University in 2009 [1] , which includes among its main principles: 1) Companies must support and respect the protection of internationally recognized fundamental human rights within their sphere of influence, and 2) Companies must ensure that their partners and collaborators are not complicit in human rights violations.

This stand by the FEUACh is part of a number of initiatives carried out by the BDS campaign together with students of the Pontificia Universidad Católica [2] of Chile and the University of Chile [3] in Santiago, in addition to the 2018 public statement by the Student Confederation calling to promote the BDS movement in all of the country's universities [4]. This historic event is linked to the decisions that the Valdivia Municipal Council made in May 2018 when it was declared an apartheid-free city.

Valentina Gatica Gómez, former president of the FEUACh (2018) stated, “This is a significant victory, in that it recognizes and supports the struggle against the systematic violations of the Palestinian people’s human rights, against the whitewashing promoted by Israel. The boycott is an active and effective way of showing solidarity internationally. That is why we must continue to protest and fight against these types of situations, not forgetting the Palestinian people, rejecting any violation of their human rights. We, too, have experienced violence and state crimes just as other territories and indigenous peoples in the Abya yala. As Mapuche, we feel, like other peoples, a great responsibility to continue standing for a different future that allows us to build another way of relating between people.”

It is important to note that the reports and research carried out by the BDS movement [5] show that much of the development of the Israeli economy is based on the military needs of the occupation of the Palestinian territory. This translates into a high technological dependence on the Israeli military, where university research plays a central role in the technological development of Israel. For example, Tel Aviv University has developed dozens of weapons systems as well as the “Dahiya doctrine” of disproportionate force implemented by the Israeli military in war crimes committed against the Palestinian and Lebanese civilian populations. Israeli universities also have various agreements with private Israeli arms companies producing military technology, such as RAFAEL and Elbit Systems, who promote their weapons with the "added value" of having been tested on the ground against the Palestinian people [6]. Weapons development has also allowed Israel to export military products that benefit its economy and are used to repress the populations of other Latin American countries [6] and in Chile [7].

Regarding the above, Fernanda Pérez Sepúlveda, former president of FEUaCh (2019), stated “In general, it seems quite unjust that so much money is dedicated to the armed forces, especially with the purchase of military systems. And what makes it worse to me is that one of those countries is one like Israel that constantly violates human rights. What’s even worse is the number of people who have been maimed and murdered in the social protests for demanding their rights. Therefore it doesn't surprise me that the Government of Chile spends more than 2.5 million dollars [8] on Israeli armored vehicles, as they are more concerned with silencing the voices that are mobilizing rather than taking action against the injustices and inequalities that people are experiencing and that today we see increased by the Covid crisis. Many workers have been laid off. There are hospitals that are collapsing, they do not have enough supplies, there are no beds for emergencies. And this is because there is no prioritization of people’s needs so that we can live with dignity. That is why a new constitution is important today, not only to take care of life in Chile and the Wallmapu, but also in other territories such as Palestine.”

Finally, Nicolas Eltit Misleh, president of the Chilean Arab Youth of Valdivia, said, “These acts of solidarity between peoples are increasingly necessary today as Israel continues to ramp up its violence against the Palestinian people despite the COVID crisis [9], and as Israel's colonial ambitions continue trying to advance via the annexation of the Palestinian territory in the West Bank with the backing of the US [10].”