June 22, 2018
/ By
Palestinian Campaign for the Academic and Cultural Boycott of Israel (PACBI)
/
Germany

In a response to the campaign, Adidas claims it "acts in a politically neutral way.” Sponsoring the Israel Football Association, which hosts clubs based in illegal settlements on stolen Palestinian land, is anything but “politically neutral.” 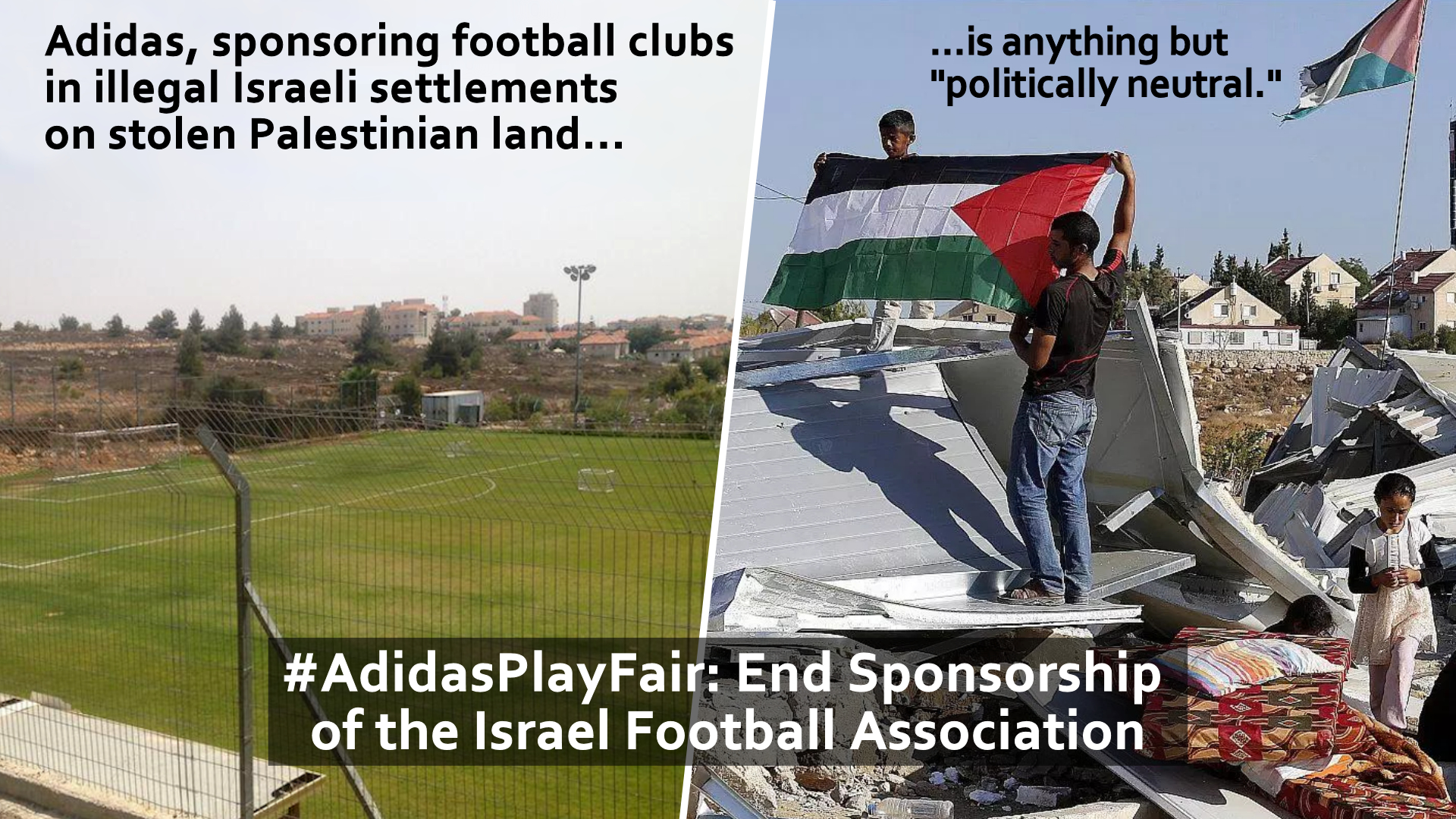 Adidas responded to the March 12, 2018 letter from more than 130 Palestinian football clubs and sports associations demanding that Adidas drops its sponsorship of the Israel Football Association (IFA), which hosts  clubs based in Israel’s illegal settlements.

We welcome Adidas’ commitment to “uphold human rights standards and norms,” and its call on FIFA to respect human rights and international law “on the question of the Israeli settlement teams.”

We appeal to Adidas to follow its own advice: to respect international law and Palestinian human rights by ending its sponsorship of the IFA as long as it hosts clubs based in illegal Israeli settlements.

Furthermore, according to the Fourth Geneva Convention, Israeli settlements are war crimes. This makes Adidas complicit in serious Israeli human rights violations through its IFA sponsorship.

Adidas’ letter also says, “Adidas acts in a politically neutral way.” But as South African anti-apartheid leader Archbishop Desmond Tutu once said: “If you are neutral in situations of injustice, you have chosen the side of the oppressor.” Adidas is not merely selling its products to the national football association of a state that is involved in a decades-long illegal occupation and the grave violations of human rights entailed in it. It is sponsoring it. Adidas, therefore, is anything but “politically neutral” in this case.

In fact, Adidas has failed to end its sponsorship of the Israel Football Association even when Israeli snipers shot 23-year-old footballer Mohammad Khalil Obeid in both legs and 21-year-old cyclist Alaa Al-Daly in his right leg, which had to be amputated. Both their professional careers were ended by Israeli bullets. Obeid told Amnesty International, “As a Palestinian [football] player my life has been destroyed... I was dreaming of playing football abroad, and to raise the Palestinian flag abroad.”

Clinging on to hope and insisting on fulfilling their passion for the beautiful game, Palestinian amputees, who have lost limbs in Israel’s repeated attacks on Gaza, have recently formed a football club.

Adidas says it works in accordance with the UN’s Guiding Principles. It is based on these guiding principles that the UN Human Rights Council has established a database of companies complicit in Israel’s occupation. Adidas risks being included in this database. The sponsorship will not only make it target of popular boycott but also of institutional divestment campaigns including at the state level.

On its web site, Adidas states that where it finds “potential or actual adverse impacts” on human rights, it is “committed to mitigate or eliminate those impacts” and that it does so “to fulfil a basic obligation as a responsible business, that is, to do no harm when it comes to the exercise and fulfilment of human rights.”

Adidas ended its sponsorship of the International Association of Athletics Federations following the doping and corruption scandals.

We urge Adidas to “do no harm” to Palestinian human rights, and to cancel its complicit sponsorship of the Israel Football Association. 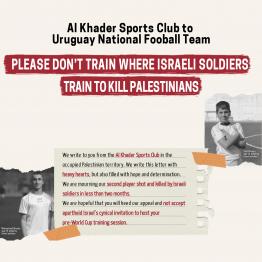