The Palestinian Doctors Syndicate calls on APPNA to cancel Israel leg of upcoming International Meeting: "As Palestinians and as health care workers we are still mourning the dead, treating the physical and psychological effects, and reeling from Israel’s latest round of brutal violence against Palestinians." 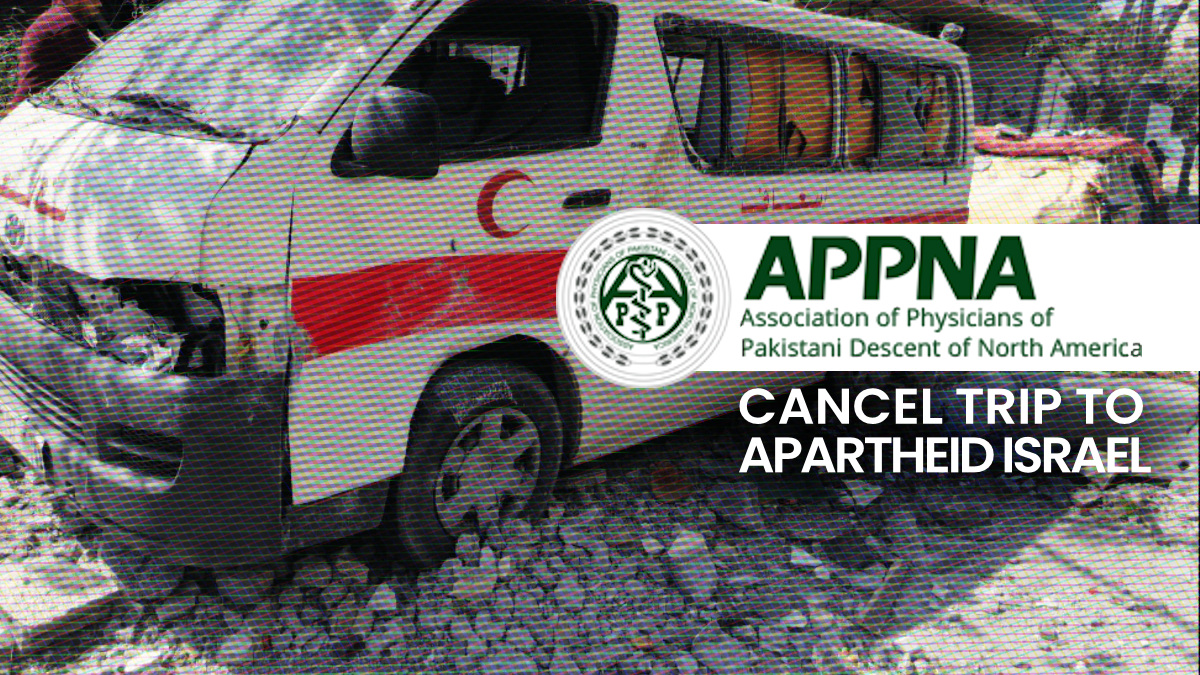 The following letter was sent to the Association of Physicians of Pakistani Descent of North America (APPNA) on September 8, 2021. The Palestinian Doctors Syndicate is still awaiting a response.

Dear APPNA Executive Committee and Board of Trustees,

We are writing from the Palestinian Doctors Syndicate to urge the Association of Physicians of Pakistani Descent of North America (APPNA) to urgently cancel the Israel leg of your upcoming 31st International Meeting, set for October 1, 2021.

We appreciate the good work APPNA does, including advocating for the right to healthcare. However the planned Israel leg of your meeting/trip crosses the Palestinian civil society boycott picket line and is in stark contrast with APPNA’s declared goals and values, in particular that of fostering “better health care, without regard to race, color, creed, gender or age”.

As Palestinians and as health care workers we are still mourning the dead, treating the physical and psychological effects, and reeling from Israel’s latest round of brutal violence against Palestinians. Israel’s May 2021 aerial bombing of besieged Gaza killed 256 Palestinians, including 66 children.

Israel’s airstrikes on residential buildings in Gaza also killed Dr. Ayman Abu al-Ouf, head of internal medicine as well as the Covid-19 response at Gaza’s largest hospital, and Dr. Moeen Al-Aloul, one of Gaza’s few neurologists, along with many members of their families.

It would be difficult to overstate the devastating effects of Israel’s latest attacks on Gaza. We ask you to please consider that this follows a succession of equally violent Israeli attacks on Gaza and 14 years of Israel’s brutal siege that have taken an unimaginable toll on health care and daily life for 2 million Palestinians in Gaza. Now please  note this is happening during a pandemic.

Israel’s recent attacks on Gaza took place as Israel worked to forcibly remove Indigenous Palestinian families from their homes in the Sheikh Jarrah and Silwan neighborhoods of occupied East Jerusalem, and violently repressed and arrested peaceful Palestinian protesters trying to save their homes. The UN has said these forced expulsions would amount to war crimes.

These neighborhoods are less than 2 kilometers from the complicit Israeli hotel listed in your itinerary.

Israel’s violent attacks on Palestinian health care are part of what Human Rights Watch has documented as an apartheid regime, and they have not stopped.

In June, Israeli forces raided, confiscated computers from and shut down the Palestinian Health Work Committees (HWC), and not for the first time. Amnesty International said the move would have “catastrophic consequences for the health needs of Palestinians across the Occupied Palestinian Territories.”

In July, Israeli forces arrested Shatha Odeh, director of HWC and has held her in military detention since. As noted in The Lancet, nearly 130 health-related organizations from more than 40 countries have signed a letter calling on the World Health Organization to intervene for her release. HWC provides vital health care services to more than 400,000 Palestinians in the occupied Palestinian territory, especially as part of the Covid-19 response.

This is part of Israel’s medical apartheid, which has denied access to Covid-19 vaccines throughout the pandemic to millions of Palestinians it holds under military occupation, despite its obligation under international law and while providing vaccines to Israelis living in illegal settlements on occupied Palestinian land.

Since 2005, the vast majority of Palestinian civil society has called on international organizations to refrain from holding meetings in Israel. Crossing the Palestinian nonviolent picket line and holding such meetings in Israel affords the Israeli government scholarly and professional cover, allowing it to continue its apartheid rule over Palestinians ad infinitum and without consequences.

As we stated, we are reeling, but we are also inspired by the resilience of our people and the outpouring of support from around the world, including from the health sector.

Nearly 24,000 individual scholars and professionals have signed statements in the last few months alone standing up for Palestinian rights and calling for Israel to be held accountable for the devastating effects of its polices on Palestinians. Among them are nearly 3,000 health care professionals, scholars and students in Canada and more than 600 health care workers in South Africa.

We are asking you to be a part of this growing trend. We are asking you not to allow your international meeting/trip to be used by apartheid Israel to whitewash its war crimes and grave violations of Palestinian human rights, including the right to health care.

We are asking you to urgently cancel the Israel leg of your trip.

We are happy to discuss this with you and look forward to hearing from you.