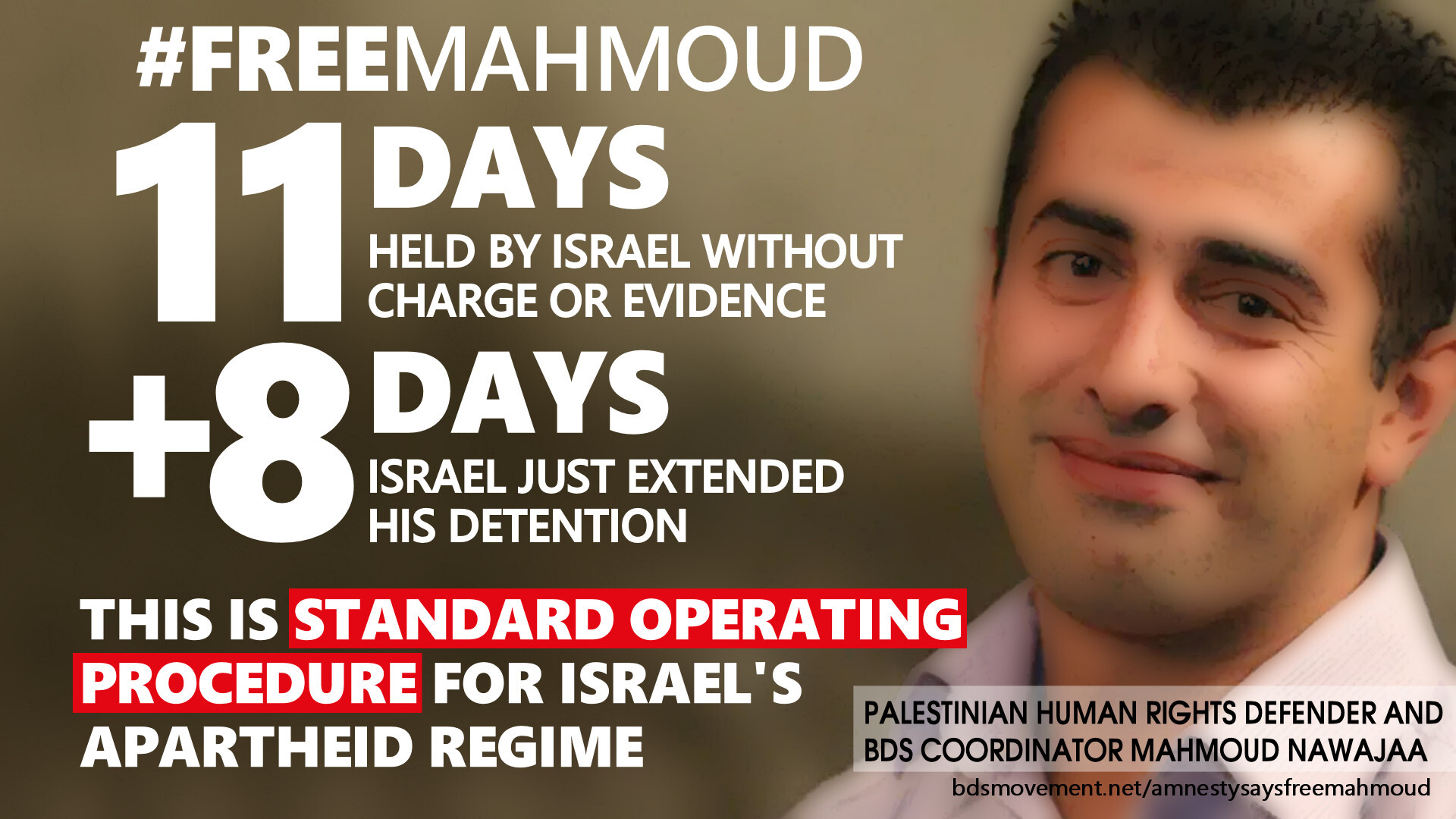 Shin Bet, Israel’s internal security service, which is interrogating Nawajaa at the Al-Jalameh interrogation center near Haifa, has presented no charges or evidence against him to date, even during today’s hearing, held at a military court near Jenin.

Since his arrest on 30  July from his home near Ramallah, in the occupied Palestinian territory, Nawajaa has not been allowed to exercise his right to see his lawyer, appointed by Addameer.

On 7 August, Amnesty International issued a statement that said:

The Amnesty statement called for pressure on Israel to release Nawajaa, saying that Israel has interpreted the international community’s failure “to take concrete action” to pressure it “as a green light” to pursue its illegal policies, including the persecution of Palestinian human rights defenders.

An international campaign with the hashtag, #FreeMahmoud, has grown to include parliamentarians, trade unions, solidarity groups, and social movements in many countries.

This further extension of the illegal detention of Mahmoud by Israel’s military court system, which is notorious for its near 100% conviction rate of Palestinians, proves once more that only sustained international pressure, coupled with internal popular struggle, can help Palestinians achieve liberation from Israel’s apartheid and colonial system.

Mahmoud’s detention is an attack on the entire non-violent global BDS movement. With the support of millions of people of conscience worldwide, we’ll continue growing our movement until all Palestinians can enjoy freedom, justice and equality.

The BDS movement has called on human rights activists worldwide to increase pressure in their respective countries to secure Israel’s immediate release of Mahmoud Nawajaa.

On 30th July, at approximately 3:30 am, Israeli occupation forces arrested Palestinian human rights defender and BDS National Committee’s General Coordinator, Mahmoud Nawajaa, from his home near Ramallah in the occupied Palestinian territory (OPT). They stormed his house, blindfolded, and handcuffed him, taking him away from his wife and three young children.

Nawajaa’s two older children, nine and seven, shouted defiantly at the soldiers who invaded their home to arrest their father. The older son said, “Leave dad alone. Get out. Your dog doesn’t scare me.”

On 2 August, an Israeli Military Court granted a 15-day extension of Mahmoud Nawajaa’s detention for interrogation. After an appeal, on 4 August, the court reduced the detention extension to eight days, only to extend it further today.

The Palestinian BDS National Committee (BNC), the largest coalition in Palestinian civil society, leads the global, peaceful Boycott, Divestment, and Sanctions movement for freedom, justice, and equality. The BDS movement, which is strictly nonviolent and anti-racist, is largely inspired by the South African anti-apartheid movement and the U.S. Civil Rights movement.

Amnesty International has called for pressure on Israel to immediately release Mahmoud Nawaja, as it considers him a human rights defender. Amnesty’s statement said, “[Nawajaa] has been detained solely for exercising his rights to freedom of expression and association and is, therefore, a prisoner of conscience.”

Nawajaa enjoys protection on grounds of his BDS activity and opposition to racial discrimination policies implemented by [Israel] against Palestinian citizens. Such protection is ensured by the Declaration on Human Rights Defenders, issued by the United Nations General Assembly in 1998.

Nawajaa, 34, holds a master’s degree in International Relations and is a committed Palestinian human rights defender, who has worked tirelessly to empower grassroots organizing in Palestine and worldwide. He has dedicated years to strengthening the BDS movement against Israel’s apartheid regime, until Israel meets its obligations under international law and respects Palestinian human rights.

Mahmoud Nawajaa’s arrest comes at a time when Palestinian civil society is calling for effective international accountability measures to prevent Israel’s planned de jure annexation of 30% of the occupied West Bank, including illegal Israeli settlements and parts of the Jordan Valley, and to stop its apartheid regime and ongoing, de facto annexation.

On the day of his arrest, Nawajaa, who is a resident of the occupied West Bank, was forcibly transferred to Al-Jalameh prison, in Israel, where he is currently being interrogated. This transfer constitutes an act of unlawful deportation, a grave breach of the Fourth Geneva Convention (Articles 49 and 147), and a war crime under the Rome Statute of the International Criminal Court (Article 8).

Under the UN’s International Convention on the Suppression and Punishment of the Crime of Apartheid, the “Persecution of organizations and persons, by depriving them of fundamental rights and freedoms, because they oppose apartheid,” is one of the inhumane acts committed to maintain an apartheid system.