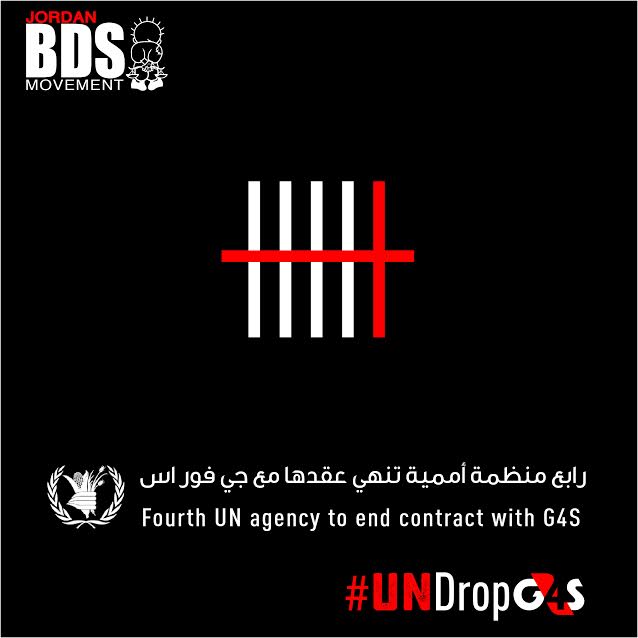 The United Nations World Food Programme (WFP) in Jordan has dropped its contracts with the world’s largest security firm, occupation profiteer G4S, following an ongoing BDScampaign over the firm’s role in Israel’s violations of human rights.

The WFP in Jordan had contracts with G4S worth more than $900,000 in 2015, but WFP has instead hired a local security service provider and joined three other UN agencies in Jordan - UNHCR, UNICEF and UNOPS - in distancing themselves from a company that is deeply complicit in human rights abuses.

The #UNDropG4S campaign has been urging UN agencies globally to end their relationship with G4S. To that end, Jordan BDS has been an integral part of the global campaign and organised several actions locally.

A delegation from Jordan BDS had met with WFP representatives at their offices in Amman on Palestinian Prisoners’ Day this year presenting the case against G4S. In September, a month before the expiry of G4S’ contract with the WFP, Jordanian NGOs wrote an open letter to UN agencies in Jordan calling upon them to drop their contracts with the firm due to its complicity in human rights violations.

Kefah Adnan, member of the Jordan BDS movement, reacted to this victory:

“We welcome WFP’s decision as a step in the right direction. UN agencies must stand on the right side of history and honour their commitment to human rights. Our campaign will continue until UN Women and UNDP, the only two remaining UN agencies with G4S contracts, follow suit.”

Last week, G4S announced that it is selling £88m worth of its investment in its Israel subsidiary. That would consist selling most of its Israeli business, after an effective campaign against the company, waged by the Palestinian-led, global Boycott, Divestment and Sanctions (BDS) movement for Palestinian rights. Nonetheless, G4S will remain directly complicit in Israel’s violations of human rights through co-running the Israeli Police Academy and servicing Shikun & Binui group in illegal settlements.

“We salute the efforts of BDS activists in Jordan and across the Arab World against occupation and mass incarceration profiteer G4S. The campaign against G4S in the region is intensifying from Kuwait to Lebanon to Morocco, and we shall not stop until G4S completely and fully withdraws from its remaining contracts with the Police Academy and the settlements.”

“The BDS movement is also committed to supporting campaigns by other justice movements against G4S for its role in the racist private prison and immigrant detention systems in various countries.”