Skip to main content
In the News
This article is reposted from
World Council of Churches
, click here to read the original article.

The World Council of Churches (WCC) and the Middle East Council of Churches (MECC) appeal for a firm and principled stance by the European Union against any annexation by the State of Israel of occupied Palestinian territory in the West Bank. Any such annexation would constitute a grave violation of international law and, as UN Special Coordinator for the Middle East Peace Process Nickolay Mladenov has observed, "deal a devastating blow to the two-state solution, close the door to a renewal of negotiations, and threaten efforts to advance regional peace."

We concur with the statement by Dr Michael Lynk, UN Special Rapporteur on the situation of human rights in the Palestinian Territory occupied since 1967, that the looming annexation is “a political litmus test for the international community”, and that it “will not be reversed through rebukes”.

We appreciate High Representative Josep Borrell’s clear affirmation that the EU does not recognize Israeli sovereignty over the Palestinian territory and that it will "continue to closely monitor the situation and its broader implications, and will act accordingly".

Accordingly, the WCC and the MECC are calling on the EU to ensure that any such annexation is met with real consequences, at least commensurate with those adopted by the EU in response to Russia’s annexation of Crimea.

In addition, in case the State of Israel proceeds with the planned annexation, the EU must surely suspend the EU-Israel Association Agreement. Article 2 of the Agreement states that relations between the EU and Israel must “be based on respect for human rights and democratic principles”. Moreover, the Lisbon Treaty states that the Union’s external actions must be guided by the principles of fundamental freedoms, respect for human dignity, equality and solidarity, democracy, the rule of law, the UN Charter and international law. For the sake of the EU’s credibility and accountability to its own fundamental principles, it must enforce conditionality clauses such as Article 2 of the EU-Israel Association Agreement, and suspend the Agreement in the event of the threatened annexation.

The WCC and the MECC are committed to the vision of a just peace for all people in the Holy Land. But the unilateral annexation of yet more of the territory that remains to Palestinians cannot lead to justice or to peace, but only to greater injustice, dispossession, escalating tensions, regional destabilization, and the further erosion of respect for international law.

The EU must not be complicit – by inaction or inadequate reaction – in this outcome. 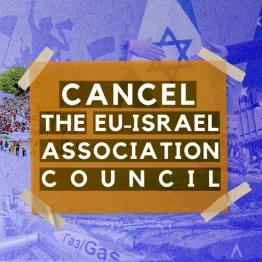