Skip to main content
In the News
This article is reposted from
Associated Students of the University of California in Irvine
, click here to read the original article.

February 10, 2021
/ By
Associated Students of the University of California in Irvine
/
United States

Passed 19 - 3, the resolution calls on the university to divest "from all corporations contributing to the human rights violations of Palestinians" 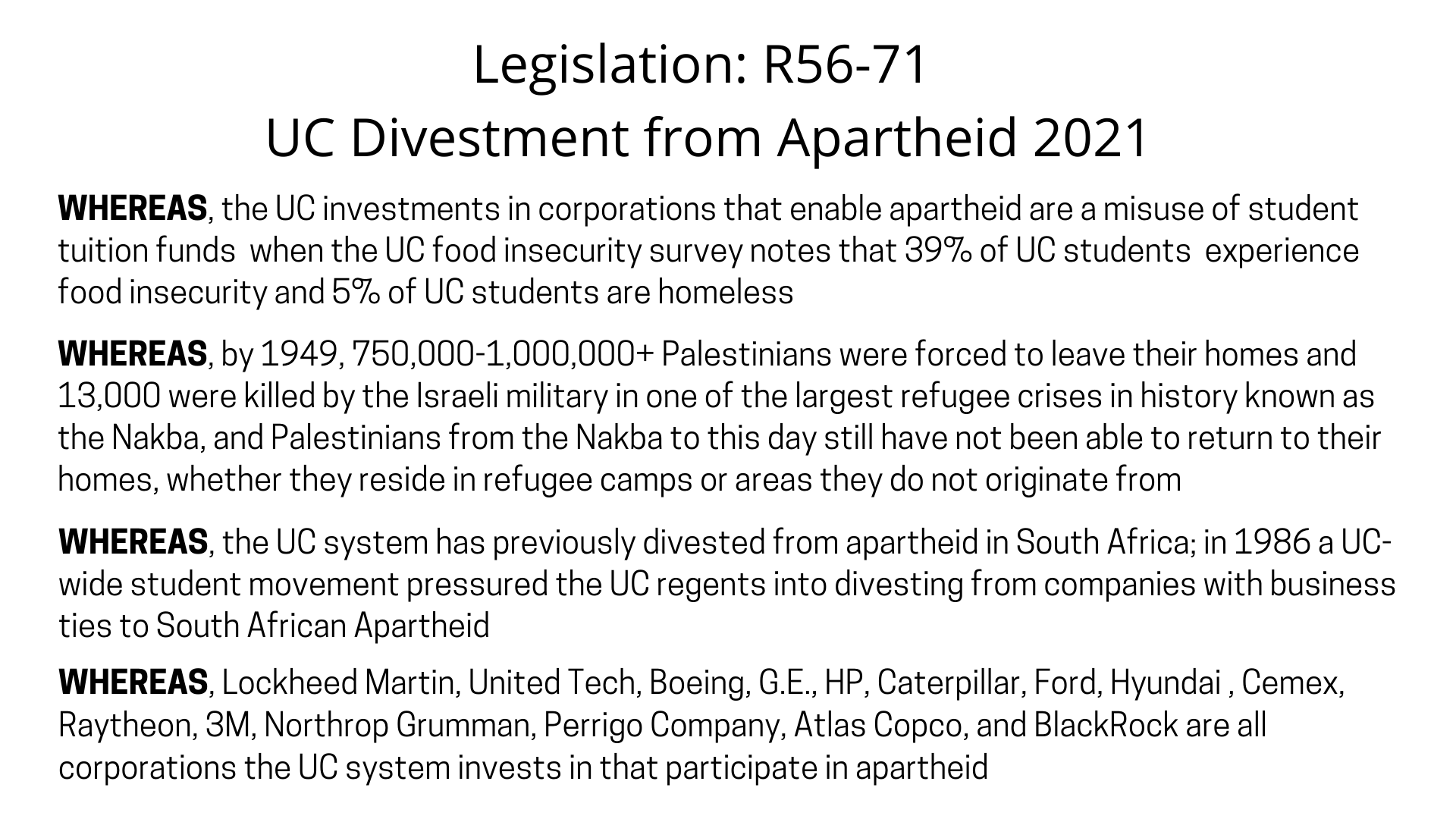 WHEREAS, the ASUCI Senate has the power “To enact legislation for the welfare and interest of the undergraduate students” (1);

WHEREAS, the ASUCI Senate has the power “To set the official stances of ASUCI” (1);

WHEREAS, we'd like to note that this is in no way related to Judaism, we acknowledge and condemn the rising anti-Semitism and stand in full solidarity with Jewish communities across campus, the nation, and the world;

WHEREAS, We would also like to note the distinction between the Israeli apartheid and Judaism, while Jewish history is intertwined with Israeli history, the current political and physical violence committed against Palestinians is not related to Judaism;

WHEREAS, we acknowledge the cultural and historical significance of Israel as a place of refuge against anti Semitism for the Jewish people, and this legislation does not take a political stance on the legitimacy of the nation;

WHEREAS, this legislation is made by a student led initiative consisting of senators and activists, we are not affiliated with the BDS organization but do advocate for divestment and similar goals;

WHEREAS, it is UC Irvine’s duty to maintain the values of “respect, intellectual curiosity, integrity, commitment, empathy...” which includes the promotion of human rights, equality, and dignity for all people without distinction (2);

WHEREAS, UCI is the only UC, besides UCSB, of the nine UC campuses that offer both undergraduate and graduate education (Berkeley, Davis, Los Angeles, Merced, Riverside, San Diego, Santa Barbara, and Santa Cruz) that does not have a legislation for divestment from apartheid (3);

WHEREAS, the millions spent on apartheid should be redirected to students who do not have their basic needs addressed;

WHEREAS, Israel has terrorized, displaced, and killed hundreds of thousands of Palestinians from its founding in the 1947-1949 Palestine War until the modern day, with several examples listed throughout this legislation;

WHEREAS, by 1949, 750,000-1,000,000+ Palestinians were forced to leave their homes and 13,000 were killed by the Israeli military in one of the largest refugee crises in history known as the Nakba, and Palestinians from the Nakba to this day still have not been able to return to their homes, whether they reside in refugee camps or areas they do not originate from (9);

WHEREAS, the number of Palestinian refugees registered under the United Nations Relief and Works Agency (UNRWA) is 5.7 million people and includes those living in Jordan, Lebanon, the Syrian Arab Republic, the Gaza Strip, the West Bank, and East Jerusalem (10);

WHEREAS, the number of Palestinian refugees does not include the millions of diasporic Palestinians worldwide;

WHEREAS, apartheid is defined as “a policy or system of segregation or discrimination on grounds of race”;

WHEREAS, Israel is an apartheid state based on this definition and its similarities to the South African apartheid;

WHEREAS, one of Israel’s leading human rights organizations B’Tselem recently announced that it “...rejects the perception of Israel as a democracy (inside the Green Line) that simultaneously upholds a temporary military occupation (beyond it). B’Tselem reached the conclusion that the bar for defining the Israeli regime as an apartheid regime has been met after considering the accumulation of policies and laws that Israel devised to entrench its control over Palestinians” (11);

WHEREAS, in regards to the land category, Israel actively works to remove any chance of Palestinian statehood by fragmenting the remaining West Bank into unrecognizable, non-contingent pieces of land;

WHEREAS, within the West Bank exists 280 illegal Israeli settlements and 600,000 illegal settlers that steal land, water, and natural resources from Palestinians (13);

WHEREAS, in regards to the citizenship category, Palestinians who once lived in the now occupied territories or have family who used to live there do not have the right to return to their homes;

WHEREAS, Palestinians living in the West Bank do not have any sort of Palestinian ID nor Passport, and instead are given color-coded identification cards that restrict many aspects of their life, clearly segregating them based on location, religion, and other forms of identity (15);

WHEREAS, Palestinians do not have the right to leave the West Bank without explicit permission from Israel, and a 760 km wall separates the West Bank from the rest of the region;

WHEREAS, the nearly two million people living in Gaza have not been able to leave the Gaza strip since 2007, which has led to the creation of the world’s largest open air prison, where civilians consistently lose access to resources and are bombed repeatedly by the Israeli military, the blockade has cost Gaza $16.7 billion in economic losses (17);

WHEREAS, in regards to the political participation category, Palestinians living in the occupied territories experience limited opportunities to hold office and voter suppression;

WHEREAS, B’Tselem states, “Palestinian citizens of Israel may vote and run for office, but leading politicians consistently undermine the legitimacy of Palestinian political representatives. The roughly five million Palestinians who live in the Occupied Territories, including East Jerusalem, cannot participate in the political system that governs their lives and determines their future. They are denied other political rights as well, including freedom of speech and association” (18);

WHEREAS, evidence of voter suppression by Israel on its Palestinian citizens is evident in the Israeli election of 2019 where the Israeli Likud party used 1,200 hidden cameras and recording devices inside of polling stations to spy on Arab voters in a violation of their privacy (19);

WHEREAS, the UC system has previously divested from apartheid in South Africa; in 1986 a UC-wide student movement pressured the UC regents into divesting from companies with business ties to South African Apartheid (21);

WHEREAS, in 2014 the UC became a signatory of the “United Nations-supported Principles for Responsible Investment,” which committed them to consider environmental, social, and governance factors in their investment decision making (22);

WHEREAS, the UC system has a responsibility to uphold its duties in the United Nations-supported Principles for Responsible Investment and to follow the precedent from the South African apartheid divestment;

WHEREAS, Lockheed Martin Corporation manufactured the Apache helicopters that were used during the 2008-2009 Operation Cast Lead that killed 1,394 Palestinians (24);

WHEREAS, United Tech provided high tech systems through its subsidiary, Pratt and Whitney, to the Israeli air force, which includes engines for military aircrafts (25);

WHEREAS, HP manages the Israeli government’s registry systems that segregate Palestinians in the West Bank, and provided PCs for Israel in 2009 during Operation Cast Lead (27);

WHEREAS, Caterpillar supplies the Israeli army with D9 armored bulldozers that are used to demolish Palestinian homes in order to clear land for illegal Israeli settlements and annexation (28);

WHEREAS, Ford’s F-150, F-350, F-550 trucks have been used by Israeli Border Police at the West Bank separation wall and have been used in the military blockade of Gaza (29);

WHEREAS, Hyundai uses Israeli technology in their internet-linked vehicles including cellular connection to servers (30);

WHEREAS, Cemex produces and supplies cement for illegal Israeli settlements in the West Bank (31);

WHEREAS, Raytheon has supplied Israel around $4 billion in weapons including the Maverick air-to-surface missile, the TOW missile, and the AIM-9X Sidewinder that have been used in Operation Cast Lead and Operation Protective Edge (32);

WHEREAS, Northrop Grumman provided missiles and firing system used by the Israelis to airstrike Gaza in violation of international law, and supplied equipment during Operation Protective Edge (34);

WHEREAS, Atlas Copco supplied industrial-scale tools and equipment for the Tel Aviv-Jerusalem fast train that cuts within Palestinian territory in two different areas (36);

WHEREAS, BlackRock is large investor in Israel’s private sector and has previously invested in illegal settlement projects in the occupied West Bank (37);

THEREFORE, LET IT BE RESOLVED that ASUCI calls upon the University of California to recognize the human rights violations committed by Israel against Palestinians;

THEREFORE, LET IT BE FURTHER RESOLVED that ASUCI calls upon the University of California to divest from all corporations contributing to the human rights violations of Palestinians;

THEREFORE, LET IT BE FURTHER RESOLVED that ASUCI calls upon the University of California to never invest in corporations found to be contributing to the human rights violations of any persons in the future;

THEREFORE, LET IT BE FURTHER RESOLVED that ASUCI calls upon the University of California to uphold its agreement to engage in UN-supported Principles for Responsible Investment;

THEREFORE, LET IT BE FURTHER RESOLVED that ASUCI calls upon the University of California to re-invest in the physical, emotional, and mental well-being of the many UC communities.

(20) Vaccine Suppression on the West Bank

(24) Human Rights in Palestine and Other Occupied Arab Territories