Skip to main content
PACBI Statement
This article is reposted from
Palestinian Campaign for the Academic and Cultural Boycott of Israel (PACBI)
, click here to read the original article.

November 14, 2014
/ By
Palestinian Campaign for the Academic and Cultural Boycott of Israel (PACBI)
/
US

A California Hillel chapter has partnered with a D.C.-linked public relations firm to fight the boycott, divestment and sanctions (BDS) movement, according to leaked emails obtained by Mondoweiss. 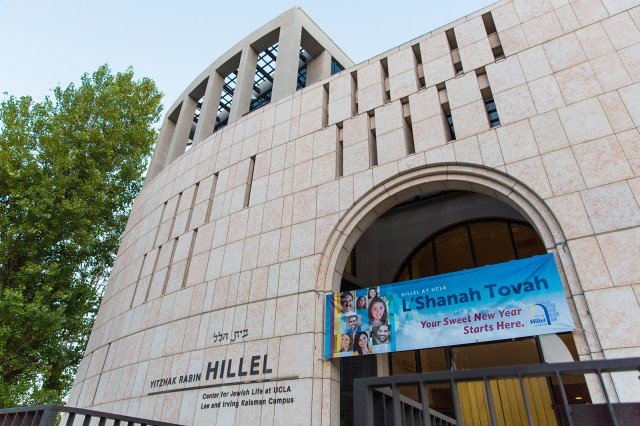 A California Hillel chapter has partnered with a D.C.-linked public relations firm to fight the boycott, divestment and sanctions (BDS) movement, according to leaked emails obtained by Mondoweiss.

The PR firm 30 Point Strategies has discussed how to combat BDS at the University of California, Los Angeles campus with Hillel staffers there. 30 Point staffers have advised UCLA’s Hillel to stay largely silent in the event of a student government resolution that recommends divestment from Israeli military-linked corporations.

“You are in excellent hands, and Hillel International and 30 Point will be behind you this semester,” wrote 30 Point staffer Arielle Poleg in a September 23 e-mail to Rabbi Aaron Lerner, UCLA Hillel’s senior Jewish educator. The text of the e-mails that show UCLA Hillel talking with 30 Point PR firm about how to fight BDS on campus. (Personal information is redacted.)

Reached by phone, Lerner said, “I’m not interested in commenting.”

The revelation that a Hillel chapter has turned to a professional public relations firm shows that UCLA Hillel is stepping up its work to fight BDS on campus. The BDS movement has sparked intense, often vitriolic, debate on campuses around the nation.

30 Point, a public relations firm populated by former journalists, has deep ties to Washington. Before joining the firm, Poleg directed the Israel Action Center at the Jewish Community Relations Council that serves Washington, D.C., Maryland and Virginia. Noam Neusner, a principal at the firm, is a former speechwriter for President George W. Bush. Neusner is also frequently identified in the press as a “spokesman” for Hillel International, the umbrella group for Hillel chapters. The exact nature of the relationship between Hillel International, UCLA Hillel and 30 Point is unclear, though.

“30 Point Strategies does not comment on its client work,” Josh Silberberg, director of media at the firm, told me.

30 Point is now advising UCLA Hillel on how to respond to a “potential BDS loss on campus.” In an e-mail, Poleg told Lerner that the “best strategy” is to “minimize coverage. We wouldn’t advise putting out any public statements or reaching out to the press.”

Lerner responded by saying that he agreed with that strategy. The Jewish educator added that Hillel would “isolate” Students for Justice in Palestine as “unrepresentative, a groups [sic] of isolated graduate students, part of Nationwide Agenda that has nothing to do with Student Life at UCLA and is an issue which our student government shouldn’t even be considering.” Lerner also suggests “a counter offensive” that would be “launched against Qatar, ISIS and Hamas to focus our concerns on terrorists who seek to kill our People around the world.”

Hillel International, the umbrella group that is the main address for Jewish student life nationwide, is staunchly opposed to BDS. The organization’s guidelines for which speakers chapters can bring to campus and what organizations they can partner with have barred BDS advocates from Hillel spaces. Those guidelines led some young Jews to create the Open Hillel movement, which advocates for the changing of Hillel’s policies on discussing BDS and other issues.

In a statement on the leaked e-mails, Open Hillel members said that “as an organization dedicated to Jewish campus life, Hillel International should not be imposing its internal 'red lines’ around issues of divestment and BDS onto the realm of campus politics. Pushing a political agenda in campus politics alienates Jewish (and other) students who do support those tactics, and is outside the scope of Hillel’s role as a home for Jewish life on campus.”

UCLA’s student government has not passed a resolution recommending that the UC Regents divest from Israeli military-linked U.S. corporations like Caterpillar, which sells bulldozers to the Israeli army. Earlier this year, a divestment resolution failed to pass at the school by a 5-7 vote.

Hillel “can see the writing on the wall…They don’t want to have a huge defeat on divestment. They’re thinking about trying to lessen the blow of it,” said Gabriel Levine, the co-founder of UCLA’s Jewish Voice for Peace chapter. JVP’s attempts to become affiliated with UCLA Hillel were denied because of the organization’s activism for Palestinian rights and support for BDS.

In the e-mails to UCLA Hillel obtained by Mondoweiss, 30 Point’s Poleg wrote that “Noam”–probably a reference to Noam Neusner– “has also been in touch with the graduate students you introduced us to. He is also helping with some of their materials as well as trying to arrange for media and communications training.” That e-mail is likely referring to some graduate students’ efforts to stop a UC-wide student union, United Auto Workers 2865, from passing a divestment resolution this year. Anti-divestment graduate students have created a website dedicated to stopping the BDS effort at the union.

Over the summer, as the war in Gaza raged, the union’s leadership laid out their intention to support the BDS movement. Now, they’re moving ahead by asking their members to vote on joining boycott efforts in December. The measure calls for the UC regents and the United Auto Workers International to divest from Israeli occupation-linked corporations and for local student union members to commit to “refusing to take part in any research, conferences, events, exchange programs, or other activities that are sponsored by Israeli universities complicit in the oppression of the Palestinian people.”

November 14, 2014
/ By
Palestinian Campaign for the Academic and Cultural Boycott of Israel (PACBI)
/
US