As part of the global Boycott, Disinvestment and Sanctions Campaign (BDS) SAMWU has agreed to engage every single municipality to ensure that there are no commercial, academic, cultural, sporting or other linkages whatsoever with the Israeli regime. Every SAMWU branch will immediately approach municipal and water authorities to become part of the BDS campaign, and to publicly declare their solidarity with the Palestinian people.

This decision was taken in response to the appalling actions of the Israeli regime against the Palestinian people, and especially the recent military intervention against the peace flotilla that aimed to deliver humanitarian aid to the besieged people of Gaza.

The SAMWU CEC congratulated the ANC Government for exercising diplomatic pressure on the Israeli regime but urged Government to take further steps to isolate the regime until there is a genuine independent democratic state for all the people of Palestine.

SAMWU pledged its active support to the Coalition for a Free Palestine (CFP), and also congratulated its sister union SATAWU for refusing to handle Israeli goods at the ports.

Finally the CEC urged all unions and civil society organisations to join in this crucial campaign, to take whatever action they can to further isolate Israeli Apartheid, and to be a positive part of the solution to the terrible humanitarian catastrophe that faces the Palestinian people. 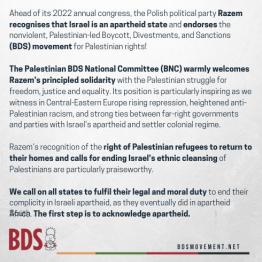