Skip to main content
In the News
This article is reposted from
Friends of Sabeel North America
, click here to read the original article. 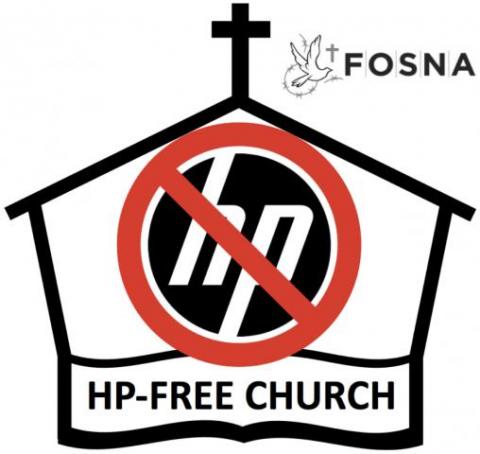 Last night the congregation of Peace United Church of Christ in Santa Cruz, CA voted to refrain from buying Hewlett-Packard (HP) products including printers, computers, and ink cartridges until HP companies cease to profit from Israel’s violation of Palestinian human rights. Peace United Church of Christ joins the Presbyterian Church, Unitarian Universalists, United Church of Christ, Quaker Friends Fiduciary Corporation, and the Alliance of Baptists, which have all divested from HP companies at the denominational level. These organizations represent over 15,000 U.S. congregations and the potential for millions of dollars in buying power.

Friends of Sabeel North America (FOSNA) initiated the campaign, HP-Free Churches, in coordination with the Global Week of Action Against HP that saw over 150 actions take place in dozens of countries across six continents. “Many individual congregations are unaware that their denominations have divested from companies that profit off the Israeli occupation or that their purchases contradict their denominations’ divestments. We aim to fix that,” said Rochelle Gause, FOSNA’s national organizer.

HP companies supply Israel with the Biometric ID Card System used to restrict Palestinians’ freedom of movement; provide servers for Israeli prisons where Palestinian children and political prisoners are held and torture is widespread; and manage the communications centers, information security, and user support of the Israeli navy as it collectively punishes the civilian population of Gaza through blockade. Similar to the way Polaroid was boycotted for providing the technology for the apartheid South Africa’s racist passbooks, HP companies were selected for their integral role in Israel’s notorious checkpoints and segregated ID system. After immense pressure, Polaroid ended its involvement with the South African regime in 1977.

“Thanks to FOSNA, we have a campaign that is easy for United Methodists to support locally at their churches and in their conferences. Participating in the HP-Free Churches campaign provides another way to help us educate church members about the horrific human rights abuses suffered by Palestinians as we take concrete action to help curb those abuses,” says Lisa Bender, chair of the Boycott & Divestment Committee for United Methodists for Kairos Response.

“Many of my colleagues are intimidated and have been told that once you take a step toward Palestinian liberation through ending our own complicity with boycotts like this, you can no longer be a strong and protective presence in your own community regarding anti-Semitism. I think that’s wrong. We can do both, and we have to do both,” remarked Dave Grishaw-Jones, a senior pastor at Peace United Church of Christ. The widespread success of the Global Week of Action Against HP is a testament to the fact that many local communities are responding to the Palestinian call to join the nonviolent Boycott, Sanctions and Divestment (BDS) movement.