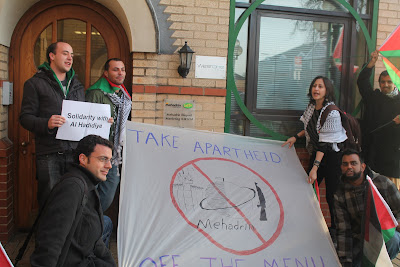 More photos: http://logicalhallucinations.blogspot.com/2011/11/bedouin-community-of-al-hadidye-in.html A group of Palestinians and campaigners for Palestinian rights delivered rotten fruit and empty water bottles to the U

The Israeli export company Mehadrin sources produce from growers in illegal settlements exploits Palestinian workers and is deeply involved in the theft of Palestinian water.

“Mehadrin sells goods from stolen Palestinian lands. The residents of Borehamwood should consider whether Mehadrin fits in with the values of their community,” said Palestinian actvist Maath Musleh, who is currently studying at City University in London.

“Trade with Mehadrin helps sustain Israel’s apartheid system over the Palestinian people and it must be brought to an end. Ordinary people have the power to contribute to a just peace by boycotting Israeli products and contributing to the movement for boycotts, divestment and sanctions (BDS) against Israel until it complies with international law,” added Maha Rezeq, a Palestinian currently studying at the School of African and Oriental Studies.

After delivering rotten fruit and empty water bottles, to symbolise the role the company plays in the theft of Palestinian water, the dozen campaigners held a rally outside the entrance to the office, and chanted “Stolen goods from stolen lands, Mehadrin should be banned!”

Campaigners also held signs showing messages of solidarity witht the Bedouin community of Al Hadidye in the northern Jordan Valley in occupied Palestinian territory, which is denied regular access to water and under immense pressure. Last week, the community was served with nine further demolition orders. In the nearby illegal Israeli settlements of Ro'i and Beqa'ot, agricultural produce is grown with an abundance of water and exported to UK supermarkets such as Tesco by Mehadrin.

The action took place as part of Take Apartheid off the Menu, a Europe wide wave of boycott, divestment and sanctions (BDS) action against Israeli agricultural produce export companies to highlight their vital role in the maintenance of Israel’s apartheid system over the Palestinian people. Actions took place in more than 60 cities across 10 countries. Last week, French campaigners held a similar action outside local Mehadrin premises.