For the record, BDS is an anti-racist issue

May 16, 2016
/ By
Hilary Aked
/
Following a wave of accusations made against some members of the Labour party for claims of anti-Semitism, the saga reached absurd new lows last week, when long-standing anti-racist activist Jackie Walker was suspended.

Following a wave of accusations made against some members of the Labour party for claims of anti-Semitism, the saga reached absurd new lows last week, when long-standing anti-racist activist Jackie Walker was suspended. Among Walker’s alleged crimes was her refusal to condemn the boycott of Israel.

While some of the accusations levelled are justified, others reek of a witch-hunt in which vocal critics of Israel, in particular supporters of the Boycott Divestment Sanctions (BDS) movement, are wildly painted as racist by Israel’s supporters. But the reality is precisely the opposite: the BDS movement is about dismantling a racist system of control and oppression akin to the movement against South African apartheid.

In his weekly column, the Guardian’s Gary Younge reminded last week that ‘racism is a system of oppression, not a series of bloopers’. Although his point was made in relation to the furore caused by Gerry Adams use of racist slurs (which Younge didn’t defend, but put into perspective), it applies to the many realities Palestinians face.

While UK mainstream media has been dominated by stories of comments and cartoons (some of which are indeed xenophobic), Palestinians continue to live within a violent, meticulously structuredsystem of religious and racial  oppression subjugating them for not being Jewish. The fact that racial hierarchies in Israel/Palestine are formally underpinned by more than fifty discriminatory Israeli lawsrarely makes the news.

It’s worth remembering that the Zionist movement gained leverage through strategic alliances with European imperialism and the father of political Zionism, Theodor Herzl, who notably sought support from Cecil Rhodes for what he called his “colonial’ goals”. For that reason Rhodes Must Fall activists are natural allies of the BDS movement.

The same goes for those supporting migrants and calling for an end to detention. BDS proponents campaign, among other things, for the right of return for the descendants of over 700,000 Palestinian refugees who were expelled during the Nakba, the Arabic name for the mass expulsion and killing of Palestinians from their ancestral land in 1948. The 68th anniversary of this catastrophic wave of ethnic cleansing, which continues to this day, albeit in subtler ways, will be marked this weekend.
In a desperate attempt aimed at drawing international support for Israel, Muslims in the West who speak up for Palestinians are now a target of pro-Israeli racism, too. Perversely, one manifestation of this Islamophobia is the insinuation that Muslims are more likely to be anti-Semitic. In fact, charges of anti-Semitism against Muslims are becoming so easy to deploy that supporters of Israel are increasingly hurling them even with flimsy evidence. Just look at the treatment of the recently elected NUS President Malia Bouattia who, as a Muslim woman critical of Zionism and supportive of BDS, was called an “extremist” by pro-Israeli papers, British mainstream media and a number of white liberals, too. 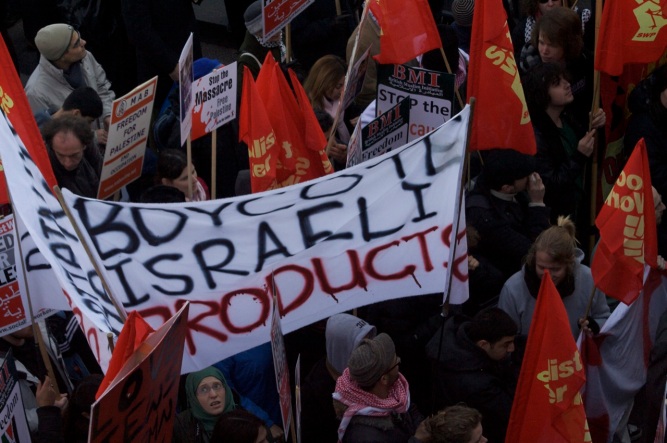 There are also parallels with the Black Lives Matter movement in the US. It’s no longer a secret thattear gas canisters deployed against activists in Ferguson, Missouri, are manufactured by the same arms company that supplies Israeli soldiers in the West Bank. Likewise, US police departments have received extensive training from Israeli security forces as has London’s Metropolitan Police.

Global corporations like G4S, a British security services company, also connect the oppression of Palestinians with that of people of colour worldwide. The multinational has made significant profits from the British government imprisoning and deporting migrants, while making big money from Israeli prisons. In the UK, G4s was responsible for the death of Jimmy Mubenga on a deportation flight, in Palestine, for Arafat Jaradat’s death in custody. The contexts of these deaths aren’t the same but the logic of racialised violence is similar.

In spite of the Israel’s racialised system of subordination, figures like Ephraim Mirvis, the UK’s Chief Rabbi, seem to think Zionism is an abstract issue rather than one connected to the actions of the Israeli state, actions he argues bear no comparison to South Africa under white rule. For leading anti-apartheid activists like Desmond Tutu, the similarities are undisputable. What Palestinians experience is “familiar to all black South Africans”, he warned in an article published in The Jerusalem Post.  Israel’s ID card permit system functions in a similar way to the notorious pass laws, an internal passport system designed to segregate the population, manage urbanisation, and allocate migrant labour

More glaringly, Barclays Bank, which supported apartheid, has come under attack for its ongoing involvement in Israel. During the 1980s the bank was a major target of anti-racist campaigning. Today it’s under pressure again, this time by Palestine solidarity activists who have highlighted itslinks to Israeli arms company Elbit.

Misrepresenting the BDS movement as racist is an inversion of reality. BDS is about supporting the Palestinians’ struggle for freedom, justice and equality, a struggle which activists of colour across the world have recognised as a fundamental racial justice issue of our time.

All work published on Media Diversified is the intellectual property of its writers. Please do not reproduce, republish or repost any content from this site without express written permission from Media Diversified. For further information, please see our reposting guidelines.

Hilary Aked is a writer, researcher and activist currently completing a PhD on Israel’s response to the Boycott Divestment Sanctions movement. She tweets as @Hilary_Aked

If you enjoyed reading this article, help us continue to provide more! Media Diversified is 100% reader-funded – you can subscribe for as little as £5 per month here.