Palestinian BDS National Committee (BNC) responds to Movement for Black Lives (M4BL) policy platform: "We pledge to firmly and consistently stand in solidarity with our black sisters and brothers in the United States and around the world by supporting the demands and policy proposals in this platform." 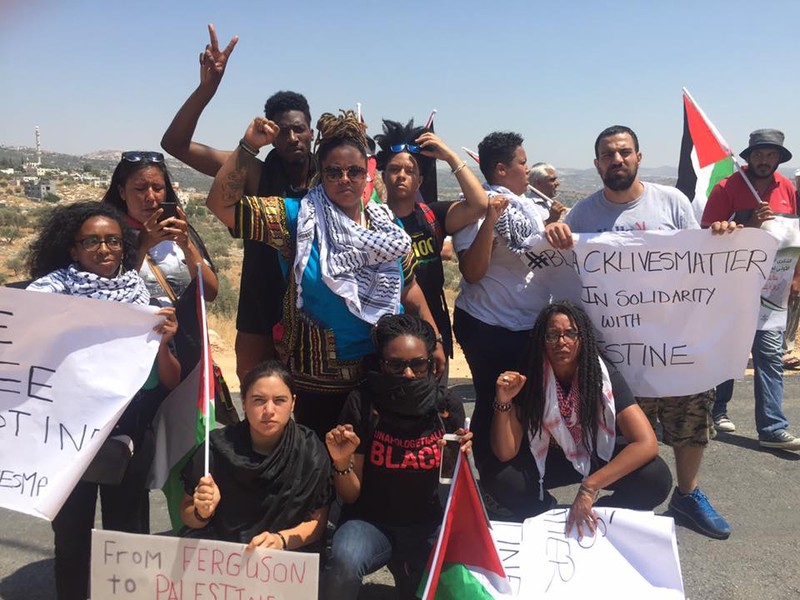 Delegates from the Movement for Black Lives join Palestinian organizers and activists in the West Bank village of Bilin during a weekly Friday protest against Israel’s occupation and colonization, 29 July. (via Facebook)

The Palestinian BDS National Committee (BNC), the largest coalition in Palestinian civil society that leads the global BDS movement, endorses the inspiring and liberating policy platform issued last week by the Movement for Black Lives (M4BL) with concrete policy demands for Black power, freedom and justice. We pledge to firmly and consistently stand in solidarity with our black sisters and brothers in the United States and around the world by supporting the demands and policy proposals in this platform.

The BDS movement is deeply inspired by the US Civil Rights Movement and the many struggles by Blacks and other people of color for racial and economic justice. Your refusal to stay silent in the face of massive and systemic state violence targeting black bodies and your resistance against repression and disenfranchisement in black communities are a source of inspiration to our own struggle against Israel’s regime of occupation, settler-colonialism and apartheid.

From Florida to Ferguson to New York to Baltimore to Los Angeles to Minneapolis and beyond the unapologetic cry of “Black Lives Matter!” has shaken the system of racism and white supremacy that allows police to gun down black people with impunity, to cage black people in obscene numbers, and to systematically impoverish and degrade the black community as a whole.

The BNC has been honored to have met in Palestine with multiple solidarity delegations of leaders from Black Lives Matter, the Dream Defenders and other organizations within the Movement for Black Lives and has learned much from these interactions. The 2015 Black for Palestine statement shed a brilliant light on the organic relationship between the US’s domestic racial oppression and its racialized imperial oppression against people of color worldwide while sending a powerful message to all Palestinians about this movement’s commitment to solidarity with Palestinians and all oppressed people around the world.

We cannot thank the Movement for Black Lives enough for the powerful words of solidarity in the invest-divest section of the platform specifically endorsing Boycott, Divestment and Sanctions (BDS) measures against Israel’s occupation and apartheid in line with the 2005 Palestinian civil society call until all Palestinian human rights are respected.

We warmly welcome the Platform’s call for an end to US military aid to Israel and for the billions of dollars in military aid that currently enable Israel’s endless wars of aggression and what the prominent Israeli historian Ilan Pappe calls, “incremental genocide” in the “Gaza ghetto,” to be reinvested in education, health, employment, social programs, and the economic uplifting of communities of color in the U.S.

While the fastest growing Jewish group in the US, Jewish Voice for Peace, has endorsed the M4BL Platform in its entirety, predictably, anti-Palestinian groups in the U.S. that work to protect Israel’s regime of colonial oppression by ensuring the unconditional flow of billions in US taxpayers money denounced it loudly. The latter feel that the growing joint struggle between Blacks and Palestinians, which is evolving through sustained and long-term intersectional grassroots efforts among our two communities and supported by progressive Jewish communities, may threaten US support for Israeli apartheid.

This thinly-veiled racism of the “white moderate” reminds us of what Malcolm X once said:

We in the BNC are honored to be listed as a resource in the Platform and will provide whatever support we can to the Movement for Black Lives. We will work with our partners in the U.S. and around the world to ensure stronger ties of solidarity between our movements and to mobilize the Palestine solidarity community in support of actions and policy recommendations of the Movement for Black Lives. We will work against anti-blackness wherever we find it, including within our own movement. And we will continue to say loudly and proudly those three words that in a just world would be completely uncontroversial but in the unjust world we live in have inspired a movement: Black Lives Matter!