October 7, 2017
/ By
Palestinian Campaign for the Academic and Cultural Boycott of Israel (PACBI)
/
Slovakia

Palestinians urge Slovakian NGO to join the growing number of festivals and cultural institutions that have rejected Israeli government funding. 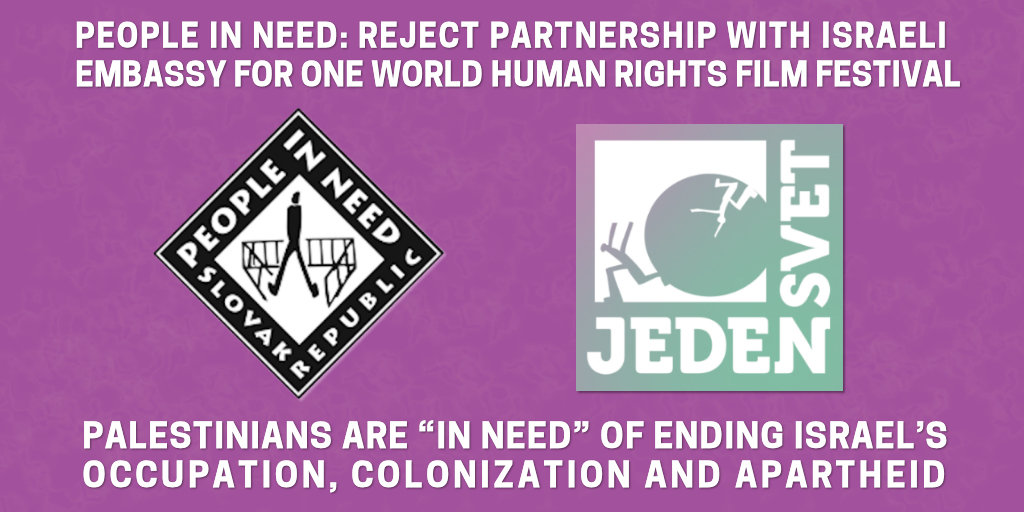 Palestinians are “In Need” of ending Israel’s occupation, colonization and apartheid

The Palestinian Campaign for the Academic and Cultural Boycott of Israel (PACBI), member of the BDS National Committee, Palestinians’ largest civil society coalition, calls on the NGO Človek v ohrození (People in Need) to respect Palestinians’ non-violent resistance and cancel its partnership with the Israeli embassy for the One World documentary film festival in Slovakia taking place between 12 and 17 October 2017. PACBI also calls on participating film directors to urge People in Need to reject Israel’s sponsorship of the festival, and to withdraw their participation if the Israeli sponsorship is not rescinded.

People in Need describes One World as the only festival in Slovakia to deal with “human rights and global issues in [all] their complexity”, yet have thus far refused to engage with calls to rescind Israel’s sponsorship. People in Need must surely be aware of Israel’s egregious human rights violations against Palestinians, as they list Palestine as one of 29 countries where they work to lend “a helping hand to those deprived of human dignity and freedom.”

By accepting Israeli government sponsorship, People in Need is not only consciously rejecting the voices of the absolute majority of Palestinian civil society, including artists and cultural institutions, who have called for a boycott of Israel until it abides by international law. It is also choosing to serve as a fig-leaf to cover-up  Israel’s oppression against Palestinians.

Israel’s sponsorship of this festival is part and parcel of its official ‘Brand Israel’ policy, which uses culture to whitewash its crimes against Palestinians. An Israeli official summarised the ‘Brand Israel’ strategy: “We will send well-known novelists and writers overseas, theater companies, exhibits. This way you show Israel’s prettier face, so we are not thought of purely in the context of war.”

A growing number of festivals and cultural institutions have rejected Israeli government funding, refusing to be a part of Israel’s propaganda efforts that aim to improve its image and mask its violations of Palestinians’ human rights.

We strongly urge People in Need to refuse to be complicit in Israel’s whitewashing of apartheid and occupation and reject Israel’s sponsorship of the One World film festival. We hope you stand on the right side of history and refuse to lend your name to the Israeli state’s propaganda, the same way conscientious cultural institutions did during the South African anti-apartheid struggle.

The Palestinian Campaign for the Academic and Cultural Boycott of Israel (PACBI) was initiated in 2004 to contribute to the struggle for Palestinian freedom, justice and equality. PACBI advocates for the boycott of Israeli academic and cultural institutions, given their deep and persistent complicity in Israel’s denial of Palestinian rights as stipulated in international law. Visit PACBI’s website and follow us on Twitter @PACBI

People in Need
October 7, 2017
/ By
Palestinian Campaign for the Academic and Cultural Boycott of Israel (PACBI)
/
Slovakia