Palestinians to Nick Cave: Heed our non-violent call for justice

September 14, 2017
/ By
Palestinian Campaign for the Academic and Cultural Boycott of Israel (PACBI)
/

Recalling musician's use of art to speak out against injustice, Palestinians urge Nick Cave to cancel concerts in Israel. 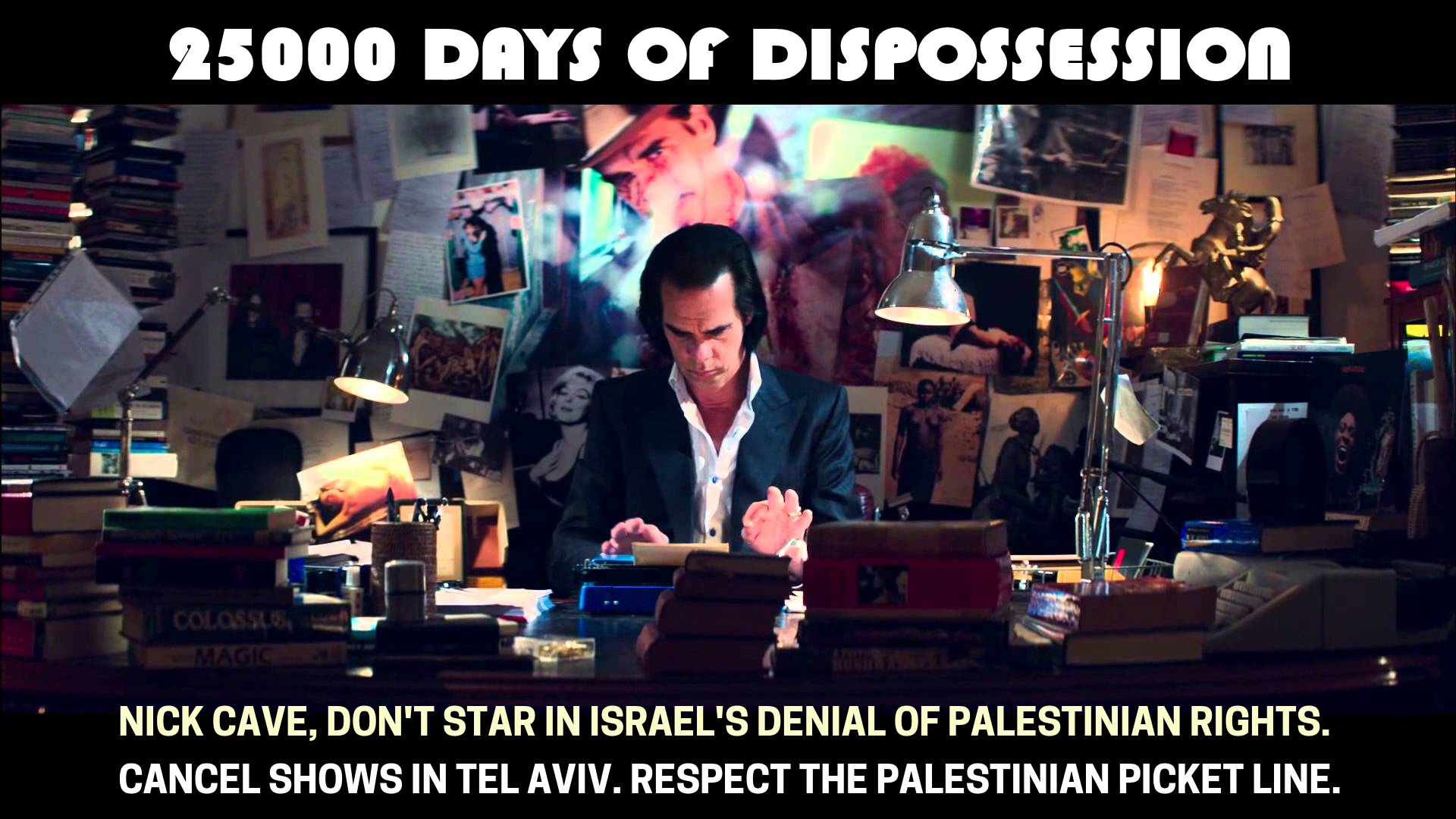 We are writing from Palestine to urge you to cancel your concerts in Israel this upcoming November. We hope that you will consider our call for a cultural boycott with an open mind, and an open heart.

Since your last performance in Israel in 1998, Israel has intensified its oppression of Palestinians with impunity and often with complicity from world governments. During this period Israel multiplied its settler population to over half a million in the occupied West Bank. Meanwhile, over 10,000 Palestinians were banished from living in occupied East Jerusalem, despite being born in the city. In 2016 alone, Israel demolished or seized 1,093 Palestinian-owned structures throughout the West Bank, including East Jerusalem, leaving 1,600 Palestinians homeless, nearly half of whom are children. This year marks a decade of Israel’s illegal siege on Gaza, where two million Palestinians live in dire conditions. And just last week, a United Nations report stated that “evidence supports beyond a reasonable doubt the proposition that Israel is guilty of imposing an apartheid regime on the Palestinian people, which amounts to the commission of a crime against humanity”.

Inspired by the South African anti apartheid struggle, Palestinians called for a boycott of Israel in 2005 until it ends these injustices and upholds human rights. Today, performing in Tel Aviv is the equivalent of performing in Sun City during the time of apartheid.

We are deeply inspired by your work. In particular, we are moved by your support of justice for UK activists who protested at the Elbit arms factory, Israel’s largest arms company, and your support for a military embargo against Israel. Although the case against activists protesting Elbit in the UK was dropped, Israel has yet to be held accountable for its wanton destruction in Gaza and the killing over 550 children in 2014.

We also deeply respect your involvement in the Voices for Justice album in support of the West Memphis Three, who were wrongfully convicted of murder following confessions obtained through questionable interrogation techniques. Similarly, Palestinian children in the West Bank are routinely roused from their beds in terrifying night raids by the Israeli army. They are then prosecuted in military courts and held in Israel’s military detention centers, which are “notorious for the systematic ill-treatment and torture of Palestinian children.” Israel detains as many as 700 Palestinian children every year.

We admire your use of art to speak out against injustice and to lift up the voices of the voiceless. As Archbishop Desmond Tutu said “If you are neutral in situations of injustice, you have chosen the side of the oppressor.” In 2010, Tutu had the following to say to the Cape Town Opera as they decided whether or not to perform in Israel:

“Just as we said during apartheid that it was inappropriate for international artists to perform in South Africa in a society founded on discriminatory laws and racial exclusivity, so it would be wrong for Cape Town Opera to perform in Israel.”

We were surprised upon hearing of your upcoming performance in Tel Aviv when the injustices you stand against are all too familiar to us. Your performance in Israel, regardless of intention, will undermine our nonviolent Boycott, Divestment and Sanctions (BDS) movement for Palestinian rights. In addition, Israel uses such performances to present an image of normalcy and openness to mask its daily violations of Palestinian human rights.

Nissim Ben-Sheetrit, former deputy director general of the Israeli Foreign Ministry, was quite open about this strategy, stating, "We are seeing culture as a hasbara [propaganda] tool of the first rank, and I do not differentiate between hasbara and culture."9

We hope that you will join other artists and celebrated cultural figures, such as Lauryn Hill, Elvis Costello, U2, Cat Power, the late Gil Scott-Heron, Massive Attack, Alice Walker, Roger Waters and others, in refusing to lend your good name to cover up Israel’s decades-long system of oppression. Doing so would allow us to continue to imagine a future free from oppression and subjugation, for us and our children to come.

Nick Cave
September 14, 2017
/ By
Palestinian Campaign for the Academic and Cultural Boycott of Israel (PACBI)
/