Skip to main content
In the News
This article is reposted from
NSJP
, click here to read the original article.

Student organizations and organizers, extend unconditional solidarity to Professor Rabab Abdulhadi, and call upon SFSU to re-affirm its commitment to academic freedom and the freedom of speech when advocating for Palestinian rights. 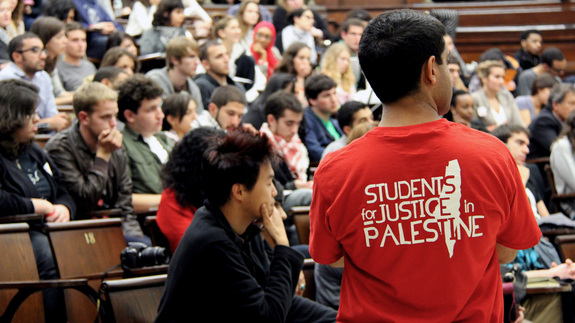 We, the undersigned student organizations and organizers, extend unconditional solidarity to Professor Rabab Abdulhadi, director of the Arab and Muslim Ethnicities and Diaspora (AMED) program at San Francisco State University (SFSU) and faculty mentor for the General Union of Palestinian Students (GUPS) at that institution.

For the past several years, external Zionist organizations, including AMCHA, Canary Mission, and Campus Watch, have carried out a coordinated attack against the scholarship and social justice work of Professor Abdulhadi specifically, and Palestinian organizers, students, and scholars at SFSU more generally. These organizations have resorted to a wide range of disgraceful behavior in order to censor the protected speech of advocates for Palestinian rights on SFSU’s campus.

More recently, these organizations have waged a coordinated smear campaign—employing Islamophobia, anti-Arab racism, outright lies and innuendo, and defamation against Professor Abdulhadi—in an attempt to pressure SFSU to sever its ties with An-Najah University, one of the premier universities in Palestine. An-Najah University has collaborations with a wide range of US universities. This academic partnership provides a great opportunity for US and Palestinian universities to build collaborative research and pedagogy on issues concerning Arab, Muslim, and Palestinian communities. And yet, these external organizations, rather than acknowledging the merits of this partnership, throw their significant power and resources in order to censor anything they would construe as outside their political dictates.

The SFSU Administration is responsible for affirmatively protecting the academic freedom and freedom of speech of all its faculty, staff, and students. This obligates the administration to actively support them when that freedom is under threat. Up until now, the SFSU administration has only vaguely indicated that they stand by international agreements or support faculty initiatives. We join academic associations, includingCalifornia Scholars for Academic Freedom and the US Campaign for the Academic and Cultural Boycott of Israel, in calling on President Wong and the SFSU administration to unequivocally reaffirm SFSU’s commitment to the academic freedom and the freedom of speech of Palestinians and Palestine advocates precisely when they advocate for Palestinian rights.

As current and prospective students, we are firmly aware of the internal and external forces seeking to control or circumscribe our speech on Palestine, and we pay close attention to the ways university administrations respond to these forces. It is precisely in these moments that universities demonstrate whether or not they are truly committed to protecting the principles of academic freedom and freedom of speech.

Finally, we move to emphasize that the attacks on Professor Abdulhadi, AMED, GUPS, and the partnership between An-Najah University and SFSU cannot be delinked from the broader context of Israel’s objective of isolating Palestinians from the rest of the world and erasing the existence and narrative of Palestinians. These attacks are inextricable from Israel’s efforts to deprive Palestinians of their human right to education, whether this effort takes the shape of Zionist shelling of universities in the Gaza Strip or restrictions on the movement of Palestinian academics and scholars.

In Solidarity and Until Liberation!