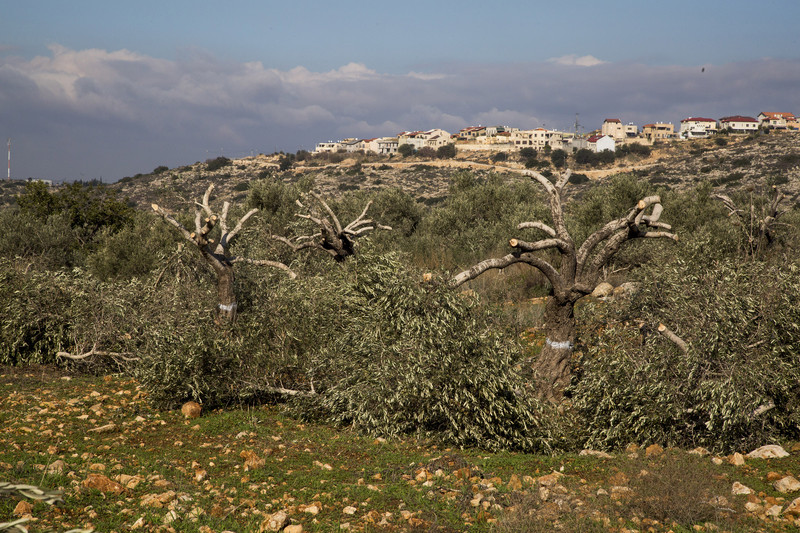 Hundreds of olive trees on private Palestinian agricultural land were cut as part of an Israeli plan to build a bypass road for illegal settlers in the area. (Photo Credit: Keren Manor / ActiveStills)

As Palestinian and international chefs, we call on our colleagues not to participate in the annual Round Tables culinary festival in Israel, and urge those already confirmed to withdraw their restaurants and personal participation.

Round Tables —  dubbed “gastro-diplomacy” — is part of the Israeli government’s "Brand Israel" propaganda campaign, launched in 2005 to distract the world’s attention from Israel’s oppression and denial of Palestinian human rights through the use of culture and arts.

One explicitly declared Israeli government strategy is to invite influencers and opinion-makers to the country to help in projecting its “prettier face.” It is therefore not surprising that the Israeli Ministry of Foreign Affairs “is responsible for flying the chefs to Israel.”

As chefs, our work is about creating inspiring, beautiful culinary experiences for people. The quality of the food we serve is dependent on the integrity of our process — from ethically sourced ingredients, to fair working conditions, to partnering with principled associates. This is true locally and globally. This Round Tables culinary festival is no place for chefs who care about indigenous peoples’ having access to their farm lands and traditional food ways.

While the Israeli government sponsors international chefs to cook delights in Tel Aviv, just a few miles away it continues to deny Palestinians their livelihoods, push families from their lands and limit access to water. It also continues to besiege nearly two million Palestinians in Gaza, where it uses a “calorie count” to control the amount of food each Palestinian is permitted to consume.

We ask our fellow chefs to join the growing number of respected artists and other cultural figures who have distanced themselves from similar events aimed at masking Israel’s oppression of Palestinians. Last year, one of the chefs who withdrew from Round Tables expressed concern over the Israeli government’s involvement in the festival, of which they were unaware.

In a similar experience from the sports world, celebrated US National Football League (NFL) player Michael Bennett earlier this year rejected a fully-paid trip sponsored by the Israeli government. He wrote:

I was not aware ... that my itinerary was being constructed by the Israeli government for the purposes of making me, in the words of a government official, an "influencer and opinion-former" who would then be "an ambassador of goodwill." I will not be used in such a manner.

We appeal to your conscience and urge you to not add any garnish to Israeli apartheid, and to refrain from participating in the Round Tables culinary festival until Israel respects its international law obligations and Palestinian human rights. Instead, let’s stand in solidarity with those struggling for food justice and for dignity and freedom for all.