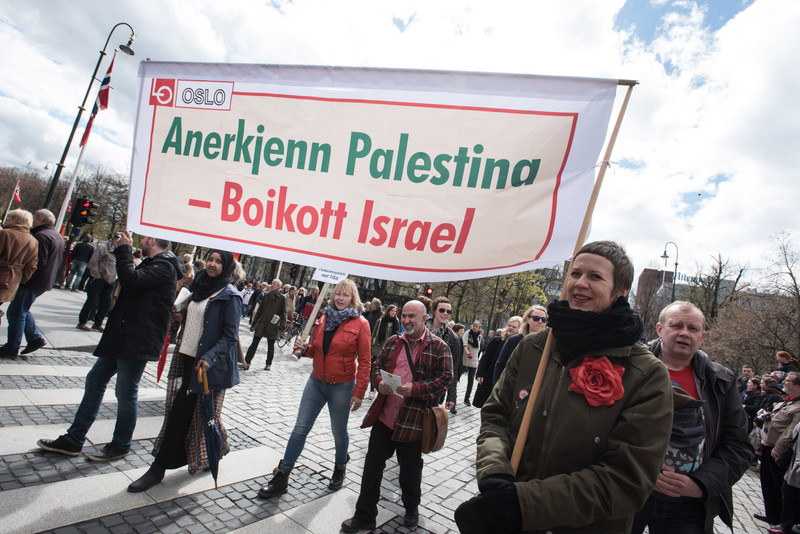 Elected representatives in Trondheim, Norway’s third-largest city, have voted to boycott goods and services from Israel’s settlements in the occupied West Bank.

Trondheim’s city council has also called on the Norwegian national parliament to take a similar decision and urged the city’s residents to shun goods from Israeli settlements.

The Trondheim decision has been hailed as a victory for the Palestinian-led movement for boycott, divestment and sanctions (BDS) against Israel.

“Although this is limited to occupied territories it is an important step forward for the BDS movement in Norway,” Kathrine Jensen, chair of the Palestine Committee of Norway, told The Electronic Intifada.

The Trondheim vote – taken on Thursday last week – was the result of a citizen’s initiative. Under that initiative, members of the public may put an item on the council’s agenda if they collect a sufficient number of signatures.

The initiative was undertaken by the Norwegian Union of Municipal and General Employees (known as the Fagforbundet).

Ole Roger Berg, a Palestine solidarity campaigner in the Fagforbundet, gathered some 340 signatures and when the resolution came to a council vote the measure passed with the support of all major left-leaning parties.

One day after the vote, Berg took part in a conference of the European Trade Union Initiative for Justice in Palestine. Berg said that Palestinian labor activists who attended that conference – held in Brussels – were “thrilled” to learn of the Trondheim vote.

“This is an illegal occupation,” said Julie Indstad Hole, a representative of Norway’s Labor Party on Trondheim’s city council.

“But in spite of UN resolutions and statements by the International Court [of Justice] in The Hague, Israel steadily worsens its occupation policies. Illegal settlements expand, construction of the wall continues and Palestinians are subjected to daily harassment and major obstacles,” Hole stated. “This is a policy that Trondheim cannot support.”

The decision was condemned by council members from Norway’s ruling party, Høyre (Norwegian for “right”).

“Høyre cannot support boycott, regardless of what variety one choses,” said Ingrid Skjøtskift, the party’s leader on the city council. “It is unfortunate if municipalities follow their own foreign policy. It does not serve Norway’s interests.”

“Municipalities have the obligation to trade ethically,” countered Jensen in response to such objections. “The importance of local democracy is key here. We must now make sure Israel will not succeed in their attempts to push back initiatives and resolutions criticizing the occupation like what happened in Reykjavík.”

“Keep the pressure on”

Jensen was referring to last year’s decision by Iceland’s capital city to boycott all Israeli goods. Faced with a backlash from the Israeli government and its supporters, the measure was rescinded just one week later.

So far reaction has been limited to statements by right-wing politicians and Raphael Schutz, the Israeli ambassador in Oslo. In a statement to Norwegian media, Schutz accused the Trondheim city council of “discrimination and double standards.”

Berg said that while he’s concerned that the Trondheim council might also consider backtracking, activists will continue to “keep the pressure on” and introduce similar measures in other cities and at a national level.

While Norway is currently ruled by a minority government comprised of Høyre and the ultra-right Progress Party, both of which are friendlier to Israeli interests than previous governments, parliamentary elections in 2017 could see the nation following Trondheim’s lead.

Recent polls show the Labor Party with a strong lead ahead of next year’s vote. The party’s platform declares that “there should not be trade of [Israeli] goods and services produced in occupied areas.”

Potential coalition partners include the Socialist Left, whose platform supports Palestinian refugees’ right of return and international economic sanctions against Israel, including an arms embargo.

With the election of Donald Trump as US president, emboldening Israeli politicians to speak openly of annexingeven more Palestinian territory, other nations may become more open to applying real economic pressure to oppose Israeli violations of international law and to recognize Palestinian rights.

While the Trondheim city council and most left-wing parties have so far focused their boycott calls on areas occupied by Israel after the 1967 War, the organization BDS Norway has led several campaigns to boycott all Israeli goods.

“Our hope is that in time they will see how the illegal settlements and Israel as such are very intertwined and that a full boycott is needed,” Selini Tavridou-Hansen of BDS Norway told The Electronic Intifada.

“However, this is an important step towards achieving this goal, and it will help put pressure on Israel and its policies. We encourage other municipalities to follow Trondheim and pass similar regulations.”