A new milestone: BDS at the Olympics

While the Olympics are without a doubt an athletic competition, they are also, and to an equal degree, about the countries that send these athletes to the games. 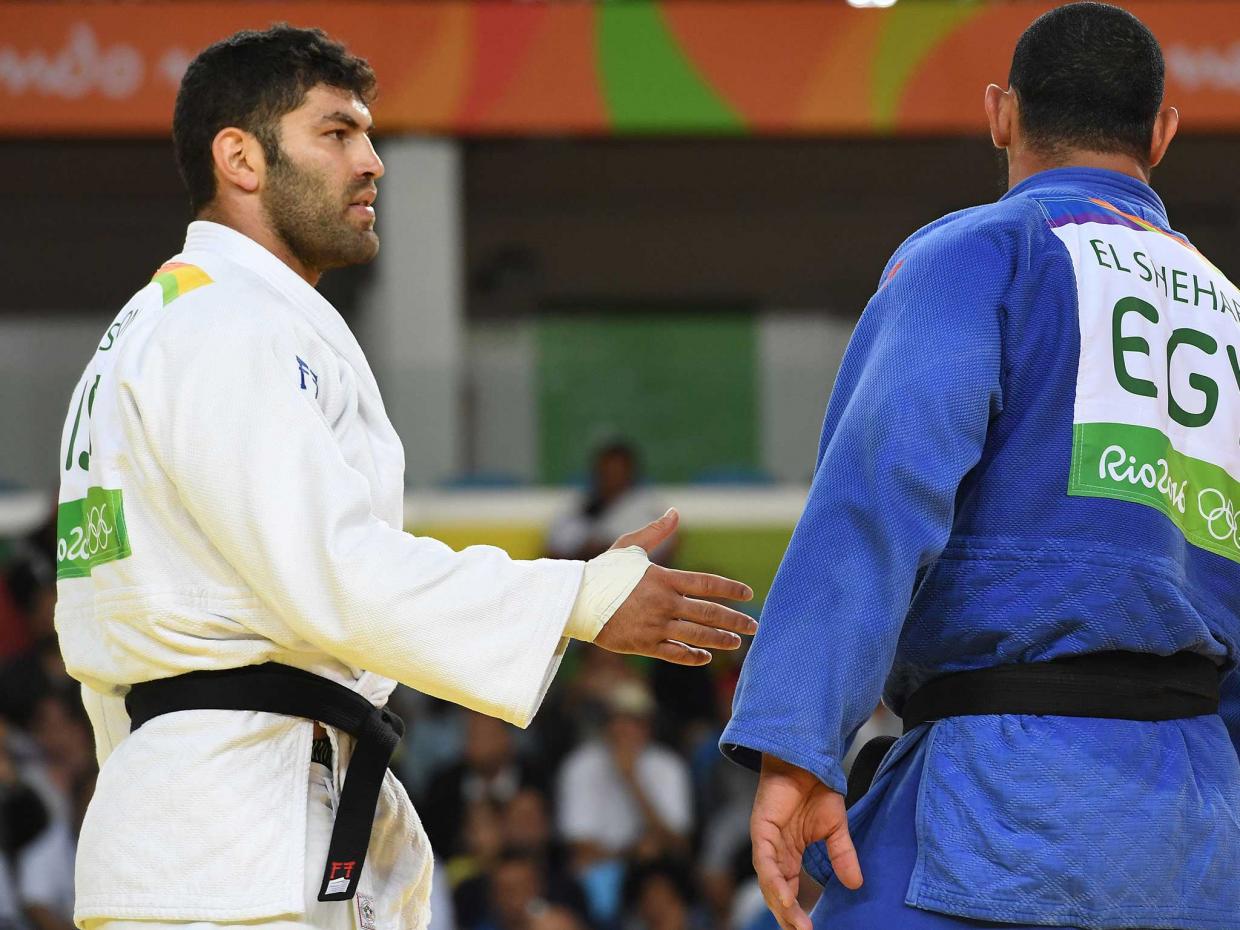 “I have no problem with Jewish people or any other religion or different beliefs. But for personal reasons, you can’t ask me to shake the hand of anyone from this state, especially in front of the whole world.” These words, spoken by an individual who has just engaged in a gesture of support for the Palestinian people, are a standard response to the accusation of anti-Semitism which is routinely hurled at pro-justice activists.

The necessary distinction made between the “Jewish people” and the Israeli state is one Israel itself seeks to erase, as it strives to deflect all criticism of its policies, blaming it on anti-Jewish hatred instead. As such, these words do not in themselves establish new grounds, but a new approach to solidarity. Yet as Egyptian judoka Islam El-Shehaby uttered them last week in Brazil, they signified a new milestone: the sports boycott had arrived at the 2016 Olympic Games.

“Shaking the hand of your opponent is not an obligation written in the judo rules. It happens between friends and he’s not my friend,” El Shehaby explained, in the fallout from his action, which resulted in his dismissal from the games, for “poor sportsmanship.”

One day before El-Shehaby’s refusal to shake the hand of the Israeli Olympian he had just competed with, another judoka, Saudi Joud Fahmy, had withdrawn from the competition, in order not to have to compete against an Israeli athlete, should she win and advance to the next round.

And yet two days earlier, the Lebanese team had refused to let Israeli athletes ride on the same bus that had picked them up first, on its way to the opening ceremony. The Lebanese athletes persistently blocked the door, preventing the Israelis from getting onto the bus. As a result, the International Olympic Committee had to send in a separate bus for the Israelis.

While the Olympics are without a doubt an athletic competition, they are also, and to an equal degree, about the countries that send these athletes to the games. At the end of the day, and at the end of the games, we have a countdown of medals by country. And even as the Games are said to be about nations coming together, they are really yet another venue for pitting nations against each other. When any athlete competes, their country and their country’s flag is displayed as prominently as their own name. The winner’s national anthem is played during the medal ceremony, and all are expected to show their respect to that country. It is no surprise that the formidable gold medalist Gabby Douglas has been pilloried by her compatriots for her refusal to place her hand on her heart during the US national anthem, (even though she was otherwise very respectful), and one of the most iconic political images in Olympics history remains the raised Black Power fists of Tommie Smith and John Carlos, at the 1968 Olympics in Mexico City.

Of course then, the snubbing by Lebanese, Egyptian, and Saudi athletes of members of the Israeli delegation is a political act. And of course, Israel has complained that these athletes “are bringing their respective countries’ ongoing conflict with Israel to the Rio games.”

The actions of these athletes are in keeping with the Palestinian call for global solidarity in the form of BDS, including the sports boycott of Israel. A sports boycott is an individual gesture with the greater immediate negative consequences suffered by the person engaging in it, as they will likely be disqualified from further competition. Yet the Arab athletes who refused to normalize with the Israelis have been criticized as violating “etiquette” and “the Olympic spirit.” Which drives one to wonder, is this yet another venue where Israeli exceptionalism wins, as the violent, racist state is left off the hook, not held accountable for its assault on Palestinian athletes?

Over the recent years, Israel has prevented Olympics-bound Palestinian team chiefs from leaving the country. It had restricted their freedom of movement, making it basically impossible for them to practice in adequate facilities, and it has shot at the ankles of Palestinian soccer players. Where was the criticism when these crimes were committed? Two years ago, an international campaign to ban Israel from FIFA, because of its human rights violations, had failed to pressure the international organization into censoring that country.

When no official organization is willing to hold Israel accountable, individuals can do so. The snubbing by some athletes of the Israeli delegation is a noble gesture in a political arena, and it is incumbent on us to appreciate it for what it is: a refusal to normalize with a country that bombs young boys playing on the beach, prevents young swimmers from reaching a pool, and prohibits Olympic hopefuls in Gaza from training with their compatriots in the West Bank. We then can surely appreciate the exquisite irony of the separate buses at the Olympic village for the delegation from a country that builds separate roads for its Jewish citizens, transporting them to their Jewish settlements in illegally occupied territories.

While the Olympics athletes were competing in Rio, another game was being played halfway around the world with an overt political message as well: we will not be cowered into “civility” towards an apartheid state. In Glasgow, Scotland, fans of Scotland’s Celtic FC had organized an event to “Fly the Flag for Palestine, for Celtic, for Justice,” during a game against the Israeli team Hapoel Beer Sheva.  The Facebook page of the event is clear about its understanding of the political reality of Israel, as the organizers explain that the display of flags would be to “invoke our democratic rights to display our opposition to Israeli apartheid, settler-colonialism and countless massacres of the Palestinian people.”

The fans had been warned by UEFA that they could face fines or the closing down of part of their stadium if they flew the Palestinian flag. But, as John Wight writes, “Celtic supporters are typically among the most politically aware and conscious of any demographic in society. For them Celtic is more than just another football club it is a political and social institution, one that has always stood and must continue to stand for justice in the face of injustice, racism, oppression, and against apartheid wherever and whenever it arises.”

Around the world, the Palestinian flag—almost like the kuffiyeh—has taken on a dimension beyond nationalism to signify progressive politics, a collective stand against systemic violence, and anti-colonialism everywhere. And as the game began, Palestinian flags appeared everywhere in the stands. A sea of Palestinian flags greeted the Israeli team in defiance of UEFA rules, and at the risk of the Celtic FC being penalized. Yes, flying the flag was without a doubt an expression of solidarity with the Palestinian people. But it was also a rejection of the system behind the oppression of the Palestinian people; a rejection of apartheid, colonialism and racism. The display of hundreds of Palestinian flags at the Celtic FC game showed an understanding of shared experiences of discrimination, disenfranchisement, dispossession, and a rejection of the Zionist narrative. Every flag that flew in that stadium ripped at Israel’s projection of normalcy and its paper-thin veneer of “democracy.” And the media carried the news around the globe, amplifying the gesture.

Beyond the boycott of consumer products in grocery stores, BDS has so far dealt a major blow to Israel’s image. Artists continue to cancel scheduled concerts in Tel Aviv, academic associations are voting to boycott complicit Israeli institutions, churches are screening their portfolios to divest from companies that profit from Israel’s illegal practices, and the recent events in Scotland and at the 2016 Olympics are the principled athletes’ way of saying: we do not normalize with the representatives of a pariah state. Before these gestures get spun into anti-Semitic incidents by Zionist hasbara, it is incumbent upon BDS activists and organizers to explain the context of the snubbing, the defiance, and the refusal to engage in “good sportsmanship” with a country that violates the most basic human rights of an entire people.