Skip to main content
In the News
This article is reposted from
Opposing Political Litmus Tests
, click here to read the original article.

The signatories commit not to serve on prize juries or in academic hiring committees in Germany whenever there are convincing indicators they may be subject to political interference or litmus tests. 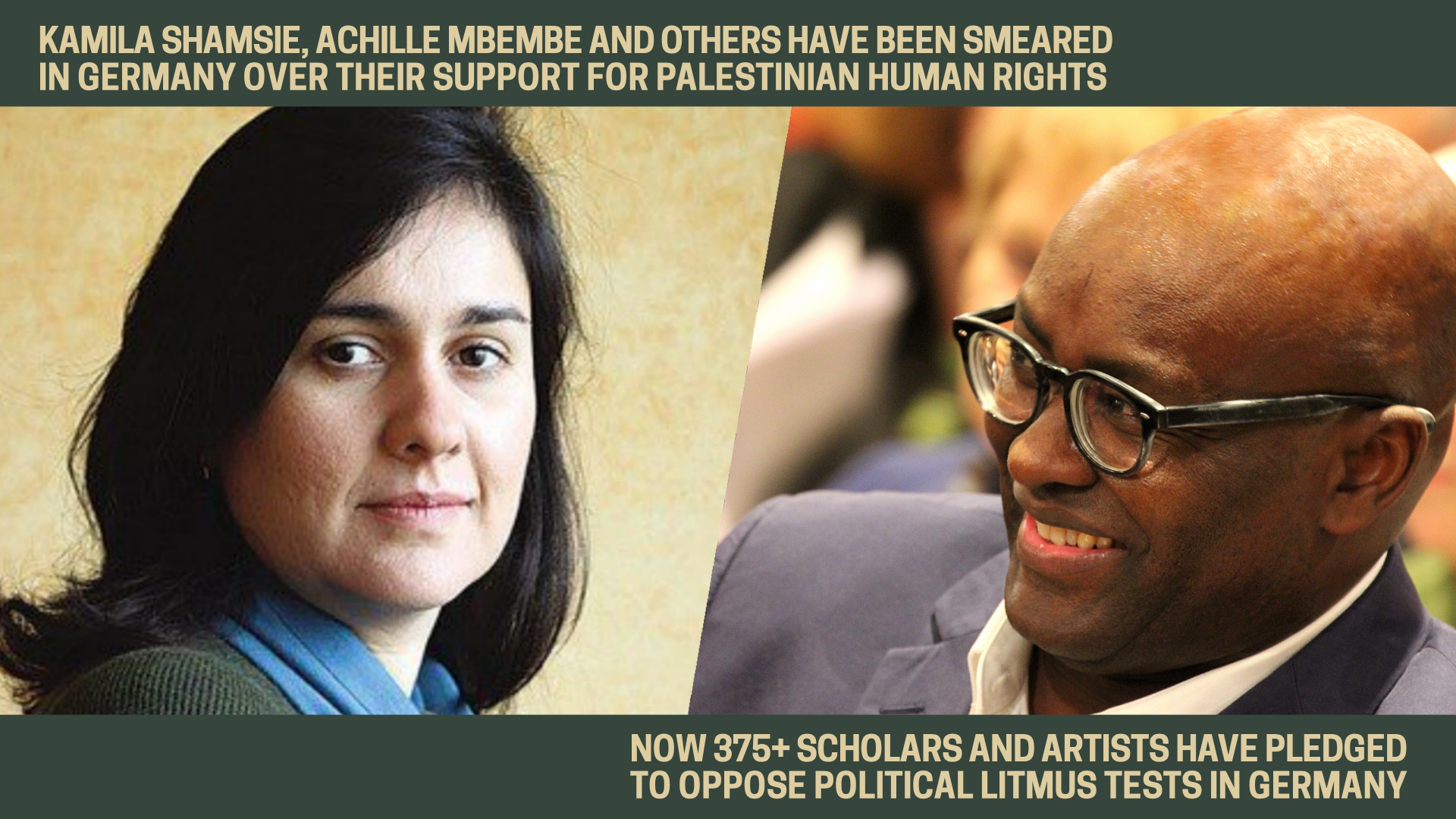 Some 377 scholars and artists from more than 30 countries have signed a pledge opposing litmus tests and political interference by institutions, municipalities, and public officials in Germany aimed at silencing advocates for Palestinian rights under international law.

The signatories commit not to serve on juries or prize committees or in academic hiring consultations in Germany whenever there are “convincing indicators that their decisions may be subject to ideological or political interference or litmus tests.”

The pledge comes in response to multiple instances in which artists and scholars suspected of supporting the nonviolent Boycott, Divestment and Sanctions (BDS) movement for Palestinian rights were subjected to repressive political interference and smear campaigns.

In March, public officials put pressure on the Ruhrtriennale Festival to disinvite philosopher Achille Mbembe, who was to deliver the festival’s opening address. The festival has since been canceled due to the coronavirus pandemic. Last year, the City of Dortmund reversed the decision to award author Kamila Shamsie the Nelly Sachs Prize for Literature.

Shamsie and Mbembe both signed the pledge.

The pledge signatories affirm that, “To reverse a prize jury’s decision or to withdraw an invitation to speak on ideological grounds is an intolerable interference that we cannot condone, even by our participation in juries subject to such interference.” They state that making decisions contingent on a commitment to disavow BDS violates academic freedom and freedom of expression, making “a mockery of the very system for and purpose of awarding prizes to individuals judged to be leaders in their fields.”

Importantly, the pledge counts more than 40 signatures from Germany, including leaders of notable cultural institutions.

The disturbing trend in Germany of silencing critical voices, in particular people of color, has increasingly been met with indignation from around the world. Hundreds of writers and cultural figures denounced the withdrawal of Kamila Shamsie’s award. More than one hundred public figures condemned the decision by Düsseldorf ‘s Open Source Festival to disinvite black American rapper Talib Kweli last year.

In 2018, 75 celebrated figures condemned Ruhrtriennale’s decision to disinvite predominantly Black music group Young Fathers and, as a result, a number of artists and groups canceled their participation in the festival, forcing the festival to re-invite Young Fathers.

Last month, dozens of Jewish and Israeli scholars, many of whom specialize in anti-Semitism and in Jewish, Holocaust and Israel Studies, called on the German government to replace Felix Klein, the federal antisemitism commissioner, over “shameful” smears of Achille Mbembe and his “leading role in the ‘weaponization’ of antisemitism against critics of the Israeli government and activists exercising their freedom of speech and assembly to protest Israel’s violations of basic rights of the Palestinians.”

“We live in a dangerous period for peace and human rights in the world, which includes rising nationalism, xenophobia, antisemitism, and islamophobia. It is important that freedom of expression is preserved and the defense of universal values is not instrumentalized by politicians who seek to shield regimes of colonial occupation and racial discrimination from international criticism and silence voices who denounce them publicly. This perversion of justice is especially regrettable if it takes place in Germany, a country which wants to be a model democracy, drawing lessons from a tragic history, an effort which many of us have admired. For this reason, I joined with regret but no hesitation the international protest of academics and writers against the recent cases of censorship and discrimination targeting eminent intellectuals of undisputable moral value – Prof. Achille Mbembe being the latest case. This should not continue, for Germany’s reputation and the cause of democracy.”

The pledge signatories state that they “hold a variety of positions on BDS, but we agree with the 40 Jewish organizations and also with the three German courts — most recently the Administrative Court of Cologne, in September 2019 — that have reaffirmed that support for BDS is a legitimate exercise of the universally recognized right of freedom of expression.”  The signatories further state that the false accusations of the kind levelled by German officials against Shamsie, Mbembe, and the others “are intended to narrow the frame of discussion solely to antisemitism and its pernicious impacts” and “are designed to draw attention away from, and to silence, any critical focus on the treatment of Palestinians in Israel-Palestine.”

“I hope that the fact that so many of us – and from such  a variety of political persuasions – feel the need to issue this statement will alert our colleagues in Germany to the gravity of the ongoing political and ideological intervention in their arena, and move them to stand with us against it.”