On the opening night of TLVFest, hear from filmmakers supporting the call from Palestinian queers to boycott the Israeli government-sponsored LGBT film festival. 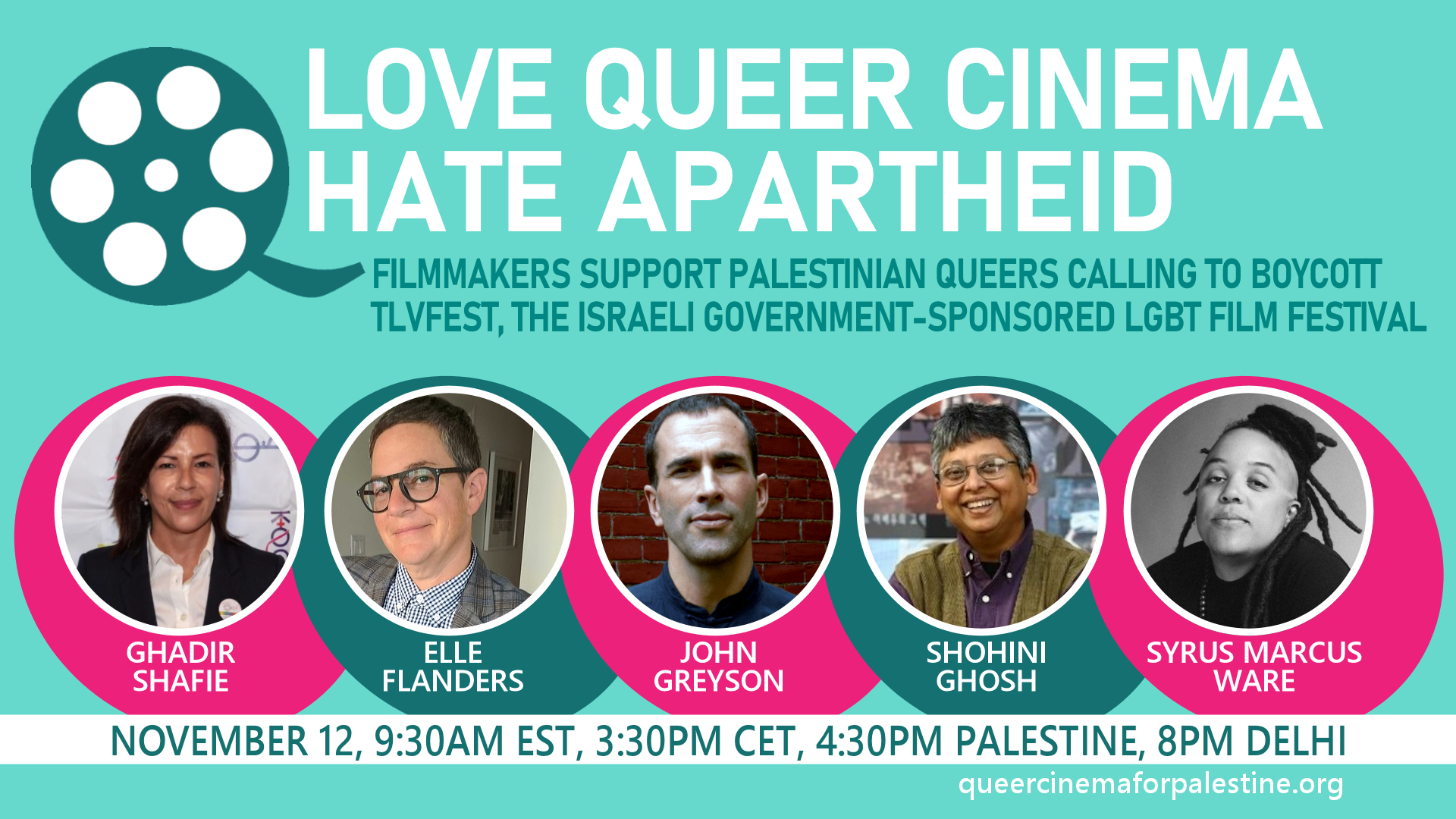 Register in advance for the webinar or join via the Boycott, Divestment and Sanctions (BDS) movement’s Facebook page.

More than 150 filmmakers committed to queer and trans liberation have launched Queer Cinema for Palestine.

Responding to calls from Palestinian queers, the filmmakers pledged not to participate in TLVFest, the Israeli government-sponsored LGBT film festival, until Israel ends its oppression of Palestinians, queer and non queer alike.

It's an example of the growing awareness of our interconnected struggles for the liberation of all oppressed peoples and communities.

On the opening night of TLVFest, join us instead for a discussion with queer filmmakers on the importance of this pledge, how Israel's far-right government uses LGBTQIA+ rights to pinkwash its violations of Palestinian rights and the role boycotts have played in liberation struggles.

Ghadir Shafie is the co-founder and director of Aswat - Palestinian Feminist Center for Sexual and Gender Freedoms. She is a feminist activist who dedicates her work and activism to advancing gender justice, advocating for sexual and gender freedoms, and promoting a greater understanding of—and commitment to—the issue of Palestine among global queers. Aswat organizes the Kooz Film Festival as part of its Art, Resistance and Social Change program.

Elle Flanders is a filmmaker and photographer based in Toronto. Raised in Canada and Israel, she has an education in Critical Theory and Visual Arts and is an alumnus of the Whitney Museum Independent Study Program. Flanders' work has been screened and exhibited throughout the world.

John Greyson is a filmmaker, video artist, writer, activist and educator whose productions have won accolades at festivals throughout the world. He is the recipient of the 2000 Toronto Arts Award for film/video and the 2007 Bell Award in Video Art. In 2009, he withdrew his film Fig Trees from TLVFest stating, “to not take this stand is unthinkable, impossible.”

Shohini Ghosh is a professor at the AJK Mass Communication Centre, Jamia Millia Islamia, in New Delhi. She is the director of Tales of the Nightfairies (2002) a film about the sex workers rights movement in Calcutta and the author Fire: A Queer Classic (2010). She is co-founder member of Mediastorm Collective, India’s first all women documentary production collective.

Syrus Marcus Ware is a Vanier Scholar, a visual artist, community activist, researcher, youth-advocate and educator. For 12 years, he was the Coordinator of the Art Gallery of Ontario Youth Program. Syrus is currently a facilitator/designer for the Cultural Leaders Lab (Toronto Arts Council & The Banff Centre). He is the inaugural artist-in-residence for Daniels Spectrum (2016/2017). Syrus is also a core-team member of Black Lives Matter Toronto.