Skip to main content
In the News
This article is reposted from
Artists for Palestine UK
, click here to read the original article.

Signatories to the letter include:

In an open letter published today (copied below) more than sixty musicians, artists, writers and filmmakers say that the ransacking of the Edward Said National Conservatory of Music (ESNCM), the Yabous Cultural Centre and the Shafaq Cultural Network in occupied East Jerusalem, and the arrest of their respective directors, ‘threaten to extinguish cultural life for thousands of artists, students and people in wider society’. (1)

The British Consulate in Jerusalem expressed its concern over the raids, via Twitter. (2) However, the artists say that expressions of concern are not enough.

The letter says that the raids are linked to Israel’s ongoing annexation of Palestinian land. It calls on the British government to take action to halt Israel’s latest round of aggression towards Palestinians . The signatories say: ‘Palestinian civil society organisations are calling for ‘targeted and lawful sanctions’, that relate to trade, arms sales and security co-operation. Britain should support them.’

Composer Jocelyn Pook, best known for scores for films such as Eyes Wide Shut, The Merchant of Venice and The Wife, said: ‘These raids strike a blow against music and a blow against education. No government which cared about culture would inflict them. No person who cares about culture should tolerate them.’

Pioneering musician Brian Eno argued: ‘These raids are part of a new series of assaults on Palestinian lives and livelihoods and seem designed to break the morale of the Palestinian people, to deny them the last thing that they actually own: their culture. It is essential that our government ends its silence, condemns Israeli actions and takes practical steps to stop the raids.’

Ahdaf Soueif, novelist and founder of the Palestinial Festival of Literature said: ‘Israel is using the familiar tactics of an authoritarian state – night-time raids, trumped-up charges, arbitrary arrests – to kill the cultural institutions that Palestinians have created. Western governments have the power to stop this intolerable use of force. They should use it.’

The British Council said on social media that the Council is  ‘a long standing partner’ of all three cultural centres, which support ‘music and culture for young people’, and preserve ‘Palestinian cultural identity & community in Jerusalem’. (3)

Composer Suhail Khoury, the director of the National Conservatory of Music, who was arrested during the raids, issued a statement urging friends of Palestinian cultural institutions in Jerusalem to ‘demand the Israeli authorities lift their foot off our necks so that we can sing in freedom’. (4)

The open letter in full:

On 22 July in occupied East Jerusalem Israeli police raided the Edward Said National Conservatory of Music (ESNCM) and the Yabous Cultural Centre, two of the most important cultural centres in Palestine. The buildings were ransacked and their directors arrested. SHAFAQ, the network which links the major Palestinian arts institutions in East Jerusalem, also saw its director arrested, after his home was invaded by police.

These attacks threaten to extinguish cultural life for thousands of artists, students and people in wider society. They are part of a well-documented campaign of harassment and intimidation, arrests, home demolitions and forced evictions of indigenous Palestinians by the Israeli government.

This campaign is linked to Israel’s plans to annex large areas of Palestinian territory, which UN human rights experts have described as a ‘vision for a 21st century apartheid’.

We note that the British Consulate General in Jerusalem has expressed its ‘concern’ about the raids. It must go further than this.  Israel’s policies must be brought to a halt.

We call on the British government to condemn the raids and to take action to stop Israel’s ongoing annexation. Palestinian civil society organisations are calling for ‘targeted and lawful sanctions’, that relate to trade, arms sales and security co-operation. Britain should support them. 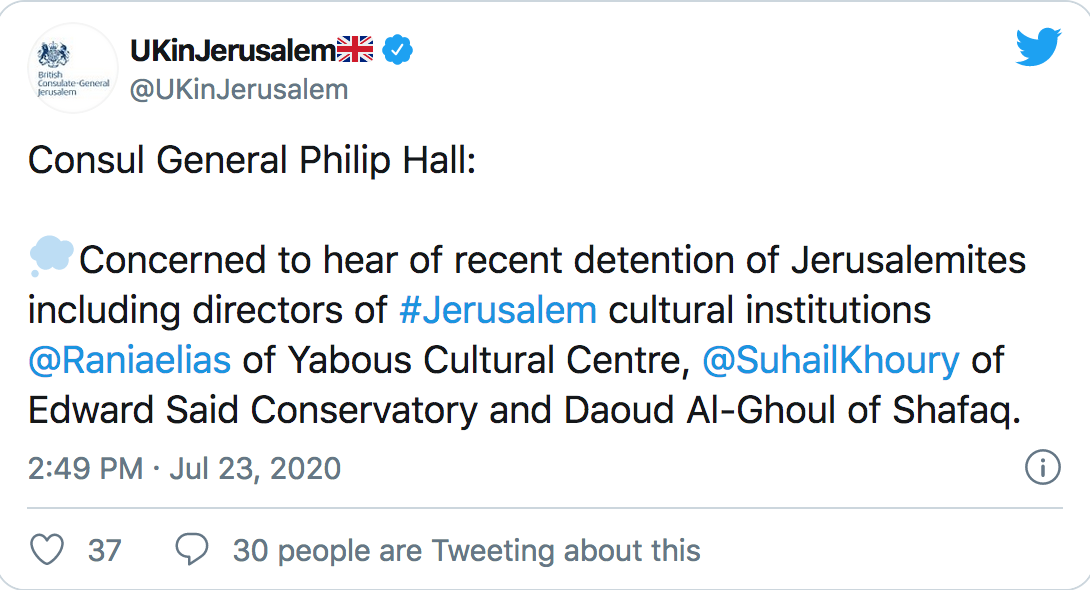 3. The British Council said the council are ‘a long standing partner’ of all three cultural centres, which support ‘music and culture for young people’, and preserve ‘Palestinian cultural identity & community in Jerusalem’. 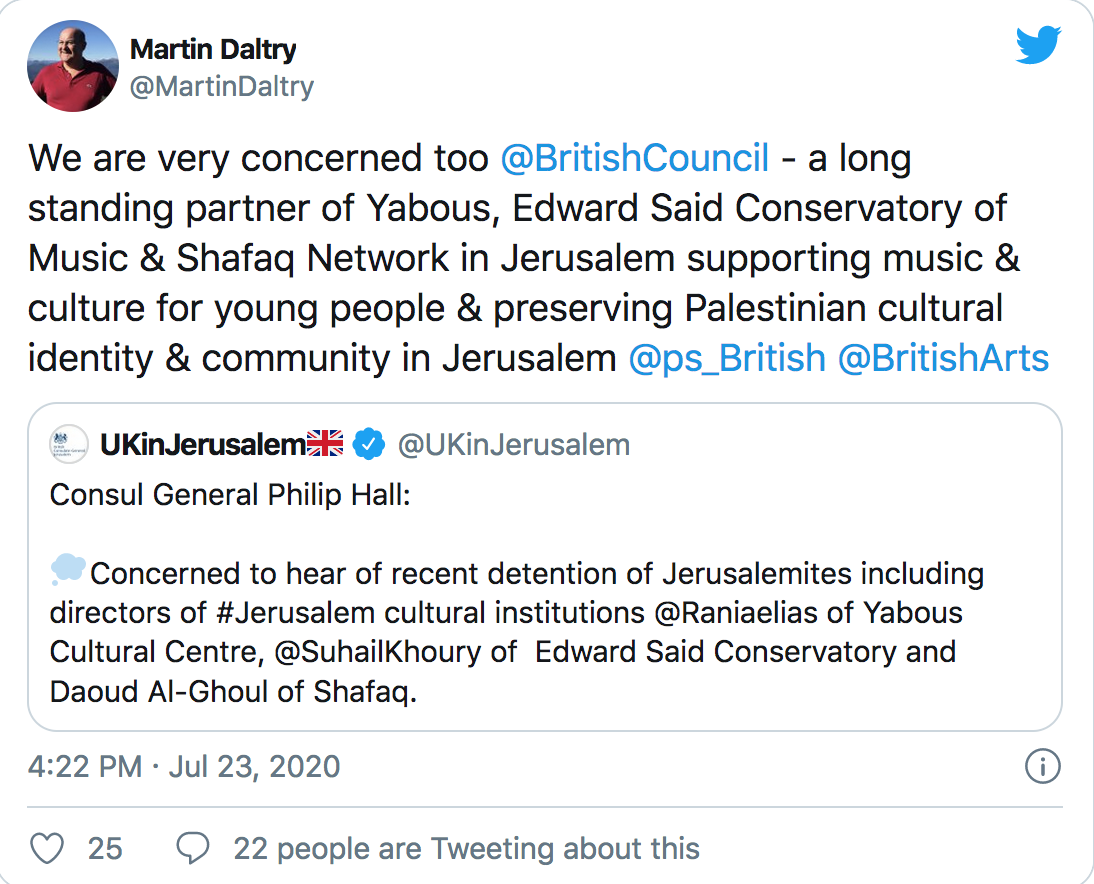 5. Joint statement by the boards of the Edward Said National Conservatory of Music and the Yabous Cultural Centre, 28thJuly 2020