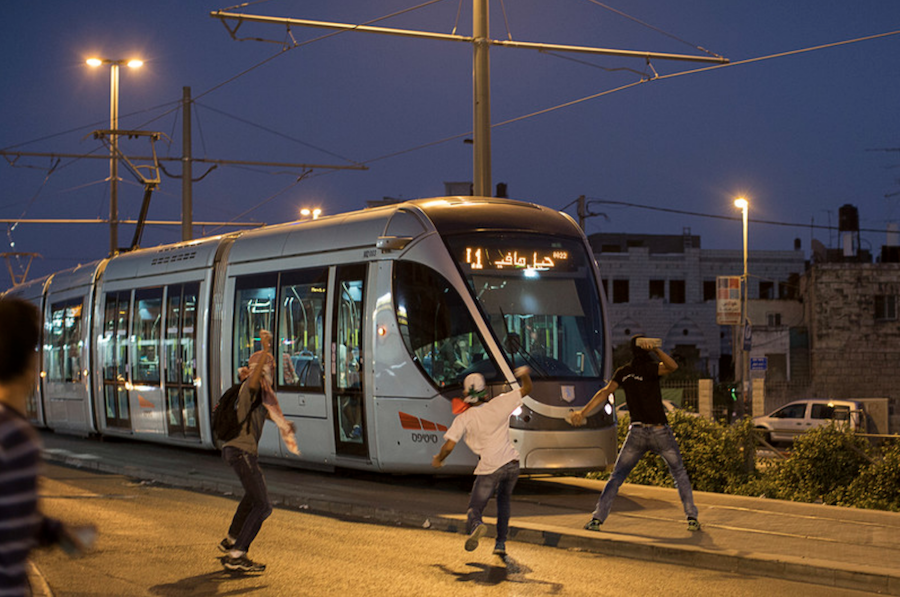 Ali Abunimah
Trade unions and human rights organizations in France are celebrating as a victory the withdrawal of train manufacturer Alstom from the Jerusalem light rail.

Meanwhile, it has also been confirmed that a Greek-led consortium failed to submit a bid.

France’s Alstom confirmed to media last week that it had dropped plans to bid on the extension of the Israeli railway that links settlements in the West Bank to each other and to Jerusalem.

Israel’s construction of settlements in the occupied West Bank, including East Jerusalem, is a war crime.

Alstom’s would-be Israeli partners had revealed earlier this month that the French firm had backed out, citing concerns over how the settler railway violates Palestinian human rights and international law.

The international human rights group FIDH, Palestine’s Al-Haq and French labor federations CFDT and CGT are among a coalition of organizations that welcomed Alstom’s decision as a “win for law.”

Those organizations have long campaigned to end the complicity of French firms in the railway, which they describe as “a tool of the Israeli settlement and annexation policy” in Jerusalem.

Earlier this month, The Electronic Intifada broke the news that Canada’s Bombardier had pulled out, along with Australia’s Macquarie and Germany’s Siemens.

With the withdrawal of the Alstom-led consortium, the number of bids on the light rail expansion dropped from an initial seven to just two – one involving China’s CRRC and one including Spanish firm CAF.

And a French subcontractor, Egis, still provides planning and consulting services to the Jerusalem light rail. It is owned by the public firm Caisse des Dépôts et Consignations.

“In the name of corporate ethics, for which no exception should be made, we urgently call upon both the government and the senior management of [Caisse des Dépôts et Consignations] to demand the immediate withdrawal of Egis from this project,” the human rights and labor groups state.

The Palestinian Authority’s office in Athens on Thursday welcomed the decision by a Greek-led consortium not to put in a bid to expand the light rail.

The PA embassy expressed its “deep satisfaction that the deadline for the bidding to construct the light railway project in occupied East Jerusalem expired on 13 May 2019, and neither private nor public Greek companies submitted bids.”

“This decision is a clear expression of rejection of colonization,” the PA office added.

The PA office thanked lawmakers, trade unions, municipalities and activists who had taken a stand against Greek involvement in the settler railway.

Some of the lawmakers who raised questions in parliament about the Greek bid were from Syriza.

Arab ambassadors had also raised objections over the project in a meeting with the Greek foreign minister, according to the PA.

Varoufakis said he was “deeply ashamed of my former Syriza colleagues” for supporting the project and pledged that his new political movement would “commit to fighting against this.”

Deeply ashamed of my former Syriza comrades. MeRA25 and DiEM25 commit to fighting against this. Watch this spacehttps://t.co/9wvpe6heqb

The Israeli embassy in Athens put out a press release denying that the Greek bid had been dropped for political reasons.

The embassy claimed that the Greek consortium had put the brakes on the bid for “purely technical reasons.”

But that spin is unlikely to dampen the sense of victory for activists in Greece and across Europe.

Attention will now turn to Spain, whose train maker CAF remains involved in one of the two consortiums still taking part in the tender.

The Israeli business publication Globes conceded that labor opposition “could disrupt CAF’s work if it wins the tender.”

In January, the company’s official workers council voted against the bid.

The French and Palestinian human rights and labor groups are calling on all European governments to “take a clear stance against companies’ involvement in the Israeli policies of annexation, colonization and occupation.”

The other consortium still in the running involves Chinese company CRRC.

“The Chinese entry into the infrastructure market in Israel is alarming the US,” according to Globes.

The Trump administration is mounting a global effort to contain China economically and to sanction companies like CRRC that do business in Iran.

This could place Israel under US pressure not to give the contract to the Chinese-led consortium.

In 2016, China voted to support a UN Security Council resolution reaffirming the illegality of Israel’s settlements and “Condemning all measures aimed at altering the demographic composition, character and status of the Palestinian territory occupied since 1967, including East Jerusalem.”

If activists keep up the pace and extend their campaign to include pressuring China to match its rhetoric with action, Israel’s settler railway could be going nowhere fast.