Israeli ministers and official spokespeople have explicitly mentioned Barghouti’s human rights activities in the BDS movement as the motive behind the anti-democratic travel ban. 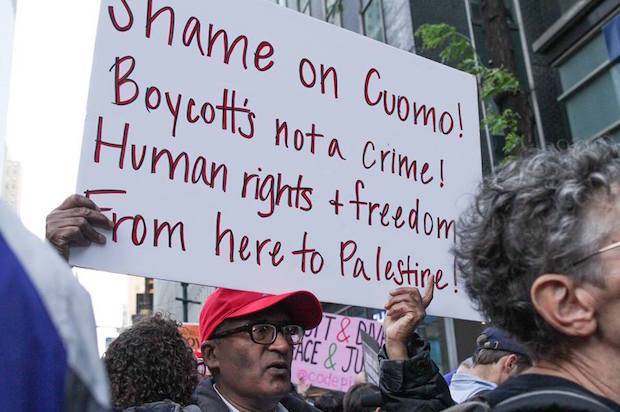 The effective travel ban imposed by the Israeli government on the BDS Movement’s co-founder Omar Barghouti was temporarily suspended for two months during a court hearing at the Haifa District Court on 19 July 2016.

Barghouti has been under an effective travel ban since April 2016, ostensibly based on the claim by the state that the “center of his life is not in Israel.” Israeli ministers and official spokespeople, however, have explicitly mentioned Barghouti’s human rights activities in the BDS movement as the real motive behind the anti-democratic travel ban.

Given the failure of Israel’s Ministry of Interior to take the necessary legal steps that are required prior to deciding not to renew Barghouti’s travel document, Barghouti’s lawyer, Gila Barzili proposed in court that the Ministry should grant Barghouti at least a temporary renewal of his travel document until it has fulfilled these requirements. The state’s attorney accepted the proposal.

Examining all the evidence that was presented on Barghouti’s behalf -- that proves that his “center of life” is in present-day Israel -- and granting him a hearing are considered fundamental rights that he is entitled to before the state decides on any measure that violates his human rights.

Around the same time, Omar Barghouti was announced as a winner -- along with Ralph Nader -- of the Gandhi Peace Award for 2016, presented by the US-based organization Promoting Enduring Peace. The Gandhi Peace Award has been presented since 1960 to people who have made “outstanding contributions to world peace, creating a sustainable ecology and  social justice.”

Speaking on behalf of the Palestinian BDS National Committee (BNC), the largest coalition in Palestinian society that is leading the global BDS movement, Mahmoud Nawajaa reacted to the Haifa court results saying:

“This temporary lifting of Israel’s travel ban on Omar Barghouti clearly reflects the impact of the worldwide condemnation of the ban and of Israel’s all-out legal, intelligence and propaganda war on the BDS movement.”

“By evoking the worst days of McCarthyism, Israel, just like the apartheid regime in South Africa had done, is alienating the liberal mainstream and inadvertently expanding the appeal of the BDS movement in it at unprecedented rates.”

“Israel’s war on BDS seems to be backfiring. It has triggered the long-sought recognition by European governments and leading international human rights organizations for the right to advocate and campaign for Palestinian rights through the boycott of Israel.”

“But we should not relax. This is only a procedural delay in Israel’s still-ongoing process of punishing Omar for his defense of Palestinian human rights. We urge people of conscience around the world to intensify their efforts to counter Israel’s repressive war on the BDS movement, as only effective and sustained pressure can have a significant impact. We call on fellow BDS activists to continue their inspiring work of growing the movement in pursuit of Palestinian freedom, justice and equality.”

1.       Omar Barghouti and his lawyer were directly informed (in person) at the Ministry of Interior office in Acre on 19 April 2016 that the Ministry had rejected the request to renew Barghouti’s travel document (and with it his re-entry permit).

2.       Barghouti has been a permanent resident of Israel since 1994. For 22 years, he has lived with his family in Acre, in accordance with the law and without having any law violations on his record.

3.       Because Barghouti carries Jordanian citizenship, he is required to leave and re-enter the country using an Israeli travel document, which must be renewed regularly (on average every two years). Until this recent wave of Israeli anti-democratic repression against the BDS movement, in general, and Omar Barghouti, in particular, he had not faced any problems in having his travel document renewed.

4.       By refusing to renew his travel document, Israel has imposed a de facto travel ban on him. This is the first step towards revoking his permanent residency status, as Israeli officials have explicitly informed AFP, AP and other media sources. The Attorney General is looking into this revocation.

5.       Human Rights Watch has condemned this travel ban stating: "Israel’s refusal to renew Barghouti’s travel document appears to be an effort to punish him for exercising his right to engage in peaceful, political activism, using its arsenal of bureaucratic control over Palestinian lives."

6.       This effective travel ban enacts part of the threats made against Barghouti and against other human rights defenders (HRDs) by four Israeli government ministers during the largest anti-BDS conference organized in Jerusalem on 28 March 2016, after Israel's failure for over 10 years to slow down the impressive growth in support for BDS. The most serious threat was of using "targeted civil assassination" against BDS "leaders," which may apply to leading BDS activists anywhere in the world as well.

7.       Amnesty International has condemned these threats, expressing concern, a.o., for Barghouti’s "safety and liberty" and upholding his right as a human rights defender to campaign “to hold Israel accountable for human rights and other international law violations” and to advocate “for the use of non-violent means in doing so.”

8.       In an official statement given to AFP, a spokeswoman for the Israeli Ministry of Interior said: “The minister [of Interior] wants to consider [Barghouti’s] status. He lives in Ramallah most of the time and part of what determines one’s permanent residency is where the center of life is. His (BDS) activities are also part of this.” [Emphasis added]

9.       This travel ban and consideration of revoking Barghouti’s permanent residency come in the middle of a repressive campaign waged by Israel and its pressure groups around the world to delegitimize BDS and Palestine solidarity in general, and to target Palestinian, Israeli and international human rights defenders who are advocating and nonviolently campaigning for Palestinian rights under international law through BDS.

10.    Aside from its declared use of its intelligence services to spy on citizens and organizations in the west that are active in BDS advocacy for human rights, Israel has been successfully lobbying "friendly" western governments to pass anti-BDS legislation, "blacklist" BDS-supporting individuals and organizations, and take other repressive, anti-democratic measures against their own citizens who are involved in BDS.

11.    This has undermined civil rights and the right to free speech and free association and has fostered a repressive environment in France, the UK, Germany, Italy, Austria and elsewhere that is akin to the darkest era of McCarthyism in the US.

12.    Journalist and constitutional lawyer Glenn Greenwald, known for breaking the NSA surveillance story, hasdescribed this well-orchestrated series of draconian measures against the BDS movement as the “greatest threat to free speech in the West."

13.    Leading US civil rights organizations, like the American Civil Liberties Union, have taken an unequivocal and principled position supporting the right to call for and engage in campaigns towards boycotting Israel and divesting from companies that are implicated in its violations of international law and Palestinian rights.

14.    The Swedish, Dutch and Irish governments have publicly defended the right to advocate and campaign for Palestinian rights under international law through BDS, as have organizations including Amnesty International and the International Federation for Human Rights (FIDH).

15.    More than 23,000 people have signed a BDS appeal to the UN regarding #RightToBoycott, and a relatedtestimony was presented at the recent UN Human Rights Council.

16.    Following the lead of other mainstream US newspapers, the Los Angeles Times recently ran an editorial upholding the right to engage in boycotts of Israel as a “protected form of free speech.”

17.    More than 350 civil society organization, political parties and trade unions in Europe have come out in full support of the right to call for BDS against Israel.

18.    The Socialist International (SI) has recognized BDS as an effective strategy for fighting the Israeli occupation and denial of Palestinian rights.

19.    More than 30 MEPs have called on the EU High Representative, Federica Mogherini, to take measures assuring freedom of expression regarding the Palestinian-led BDS movement for justice and equality and recognizing Omar Barghouti, a co-founder of the BDS movement, as a human rights defender.