Skip to main content
In the News
This article is reposted from
Hamid Dabashi
, click here to read the original article.

The Israel lobby: All bark but little bite

Al Jazeera's investigation The Lobby shows how weak Israeli propaganda actually is in the face of the BDS movement. 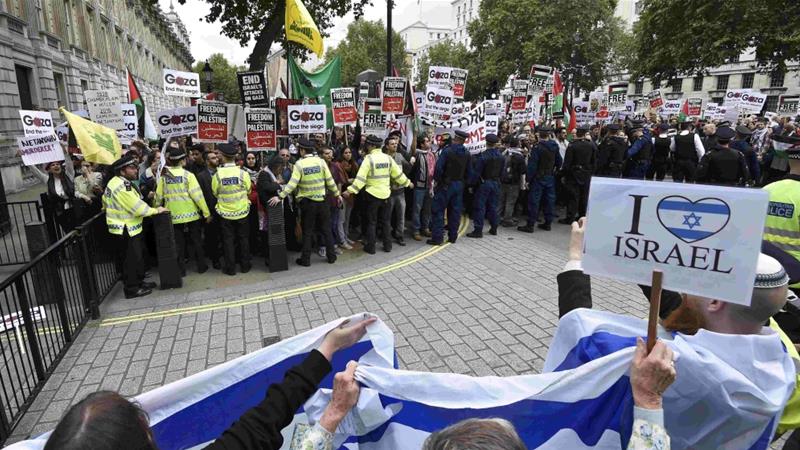 Israel is not prepared to deal with a non-violent struggle by ordinary people, writes Dabashi [Toby Melville/Reuters]

The Al Jazeera Investigations expose of how the Israel lobby seeks to manipulate British politics has had a global reception far beyond the United Kingdom or the Arab world and revealed for the whole world to see the systemic plots by Israeli officials to sway European and of course American politics in directions that secure the interests of the settler colony.

A six-month undercover investigation has revealed how Israel relentlessly penetrates different levels of British government and parliamentary democracy to safeguard its continued theft of Palestine with total impunity.

In four consecutive episodes the world watches with incredulity how pro-Israel groups target the British youth, manipulate the open forums of a Labour Party Conference, and abuse the legitimate fear of anti-Semitism by deliberately conflating it with the equally legitimate critic of Zionism, and indeed plot to "take down" British politicians whom they deem critical of their armed robbery of Palestine.

What does "take down" mean except target for character assassination anyone who dares to question Israel in any shape or form?

A key finding of this important piece of investigative journalism is the Israeli propagandists' deliberate conflation of the critic of Zionism with anti-Semitism in order to paralyse the critical discourse and put on the defensive the slightest defence of the inalienable rights of Palestinians to their lives, liberties, and homeland.

The strategy has hitherto worked for the simple fact that it conceals a very simple truth: Anti-Zionism is not anti-Semitism for a very rudimentary reason - not all Jews are Zionists and not all Zionists are Jews.

There are Christian Zionists, and in fact even Muslim and Hindu Zionists. As we know only too well, Zionists not only tolerate but in fact embrace anti-Semitism if it serves their ideological purposes.

There is enduring and sustained anti-Semitism in Europe and now particularly in the United States. That vintage European anti-Semitism, entirely dominant in Donald Trump's campaign, is now coupled with Islamophobia, and Jews and Muslims have united to oppose them both.

Israel has absolutely not an iota of moral authority to carry the mantle of opposing anti-Semitism, while Zionist propaganda machineries are instrumental in promoting Islamophobia.

Zionism is an outdated, flawed and defunct ideology, almost in precisely the same manner that militant Islamism as a political project is equally defunct, as are indeed Christian and Hindu fundamentalism, and now Buddhist nationalism targeting the Rohingya in Myanmar.

Not a new tactic

For those of us who have been the targets of such Zionist antics, of course there is nothing new in this Al Jazeera piece. We have lived these pernicious facts, endured their consequences, and triumphed in helping to sustain the legitimacy and nobility of the Palestinian cause.

Long before this Al Jazeera piece on The Lobby, John Mearsheimer and Stephen Walt did a similar expose in their pioneering essay The Israel Lobby (2002), for which they could not find a US publisher and they had to publish it four years later in London Review of Books. An extended version of that essay later appeared as a book in 2007.

Whereas the primary site of Mearsheimer and Walt's investigation and arguments was the US, the Al Jazeera investigation complements it by concentrating on the UK theatre of operation of the selfsame pernicious plotting against the democratic apparatus of a sovereign nation-state.

This Al Jazeera piece points towards a transformative moment in the continued struggles of Palestinians for their national sovereignty that must not be lost.

The significance of this series is not in merely documenting a systematic attempt to subvert a sovereign nation's democratic institutions. If we get to be too incensed and aghast at that preposterous fact, we will miss something far more important.

A settler colony that amasses weapons of mass destruction, aided and abetted by the US and Europe, that engages in periodic incremental genocide of Palestinians - as the prominent historian Ilan Pappe has aptly called the practice - and that engages in a sustained course of state terrors, assassinations and kidnapping, of course will not shy away from a measly interference in British, US, or any other democratic process.

Israeli governments have been "taking down" much more than British political figures for a long time.

The lesson in these Al Jazeera revelations is something entirely different. The moral of the story is actually explained in two brief subplots before the actual narrative begins.

Each episode begins with scenes of a series of military attacks on the Palestinian youth, before it cuts to scenes of massive peaceful protests by supporters of the Boycott, Divestment, Sanctions (BDS) movement.

The rest of each episode is then dedicated to outlining the manner in which the Israeli embassy, through one of its chief operatives, tries to manipulate British politics.

The significance of these episodes lies far more in the scenes showing the brutality of Israeli military occupation followed by scenes of those peaceful protests on behalf of the BDS movement than in the pernicious plots of the Israeli embassy.

It is the peaceful, principled, unwavering, and now globally successful project of BDS that has scared the Hasbara propagandist witless.

The Al Jazeera piece as a result is not an indication of how powerful the Israeli lobby is but, quite to the contrary, how weak, pathetic, wayward, ill-prepared and caught off-guard it is.

The trouble with the Hasbara - a Hebrew word for propaganda - is the trouble with Israel. It is not prepared to deal with a non-violent struggle by ordinary people. It is only prepared to maim, murder, and steal other people's land. A peaceful protest by defenceless people it simply does not know how to face.

Precisely for that reason the future of Palestine is very clear: it belongs to Jewish, Christian, Muslim, and other Palestinians, entirely through and beyond their religious affiliations, gathering in a momentous historic rendezvous with one state apparatus for all its citizens. That beautiful prospect is not too far in our future.