January 24, 2019
/ By
Electronic Intifada
/
Ireland
A bill to outlaw trade in goods from Israeli settlements has been passed by the lower house of Ireland’s parliament, a major step on its journey into law. 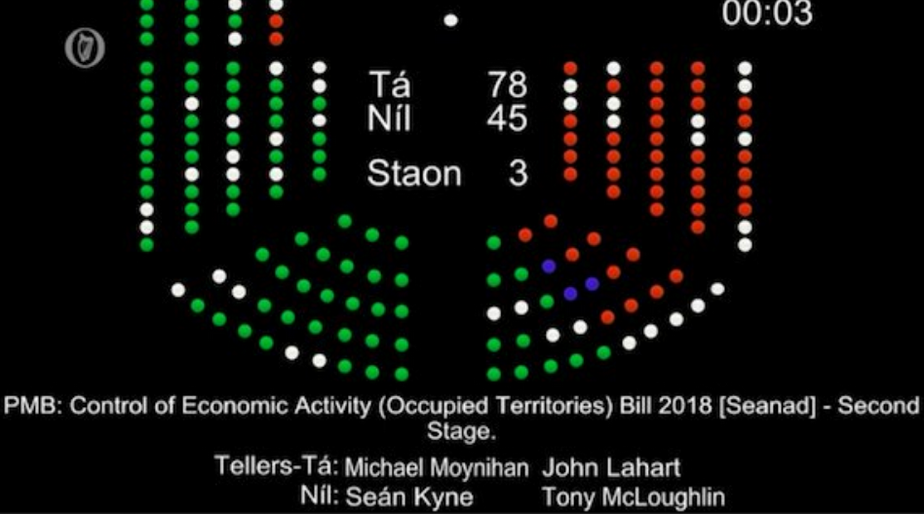 A bill to outlaw trade in goods from Israeli settlements has been passed by the lower house of Ireland’s parliament, a major step on its journey into law.

On Thursday, the Dáil overwhelmingly approved the Occupied Territories Bill by a vote of 78-45, dealing a big defeat to the government of Leo Varadkar, the Irish prime minister.

Frances Black, the independent senator who initiated the legislation last year, greeted the result as “amazing,” adding that “Ireland will always stand for international law and human rights, and we’re one step closer to making history.” 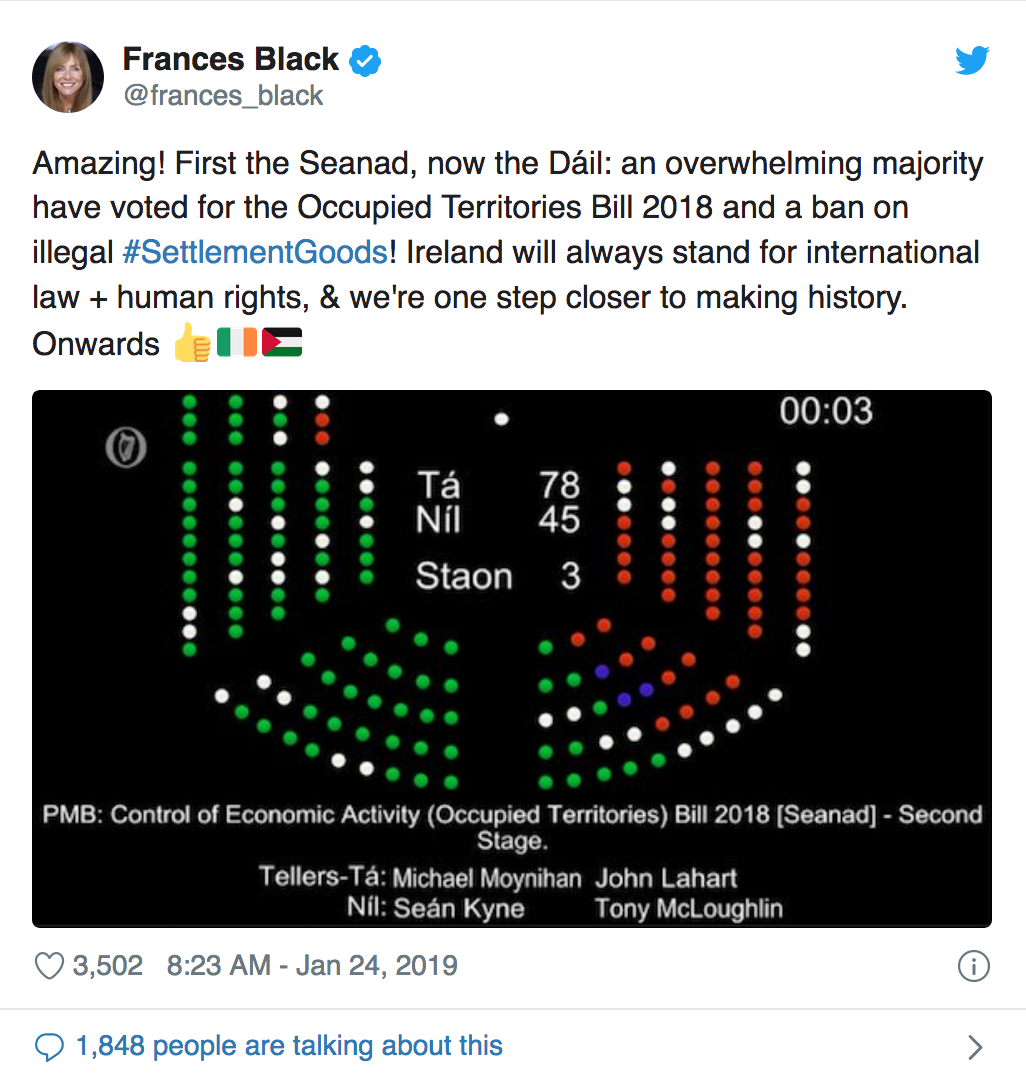 The Control of Economic Activity (Occupied Territory’s) Bill 2018 has now passed Second Stage in the Dáil by 78 votes for to 45 votes against.@frances_black @MichealMartinTD @fiannafailparty pic.twitter.com/8PXhOd3tiw

In December, the upper house gave its final approval to the bill, making the Seanad the first house of parliament in the world to pass legislation banning the import of goods from Israeli settlements in occupied territory, which are illegal under international law, according to Sadaka, an Irish group that helped craft the bill.

Passage in the Dáil was assured as Fianna Fáil, the second largest grouping in parliament, had given its backing to the bill, along with other opposition parties: 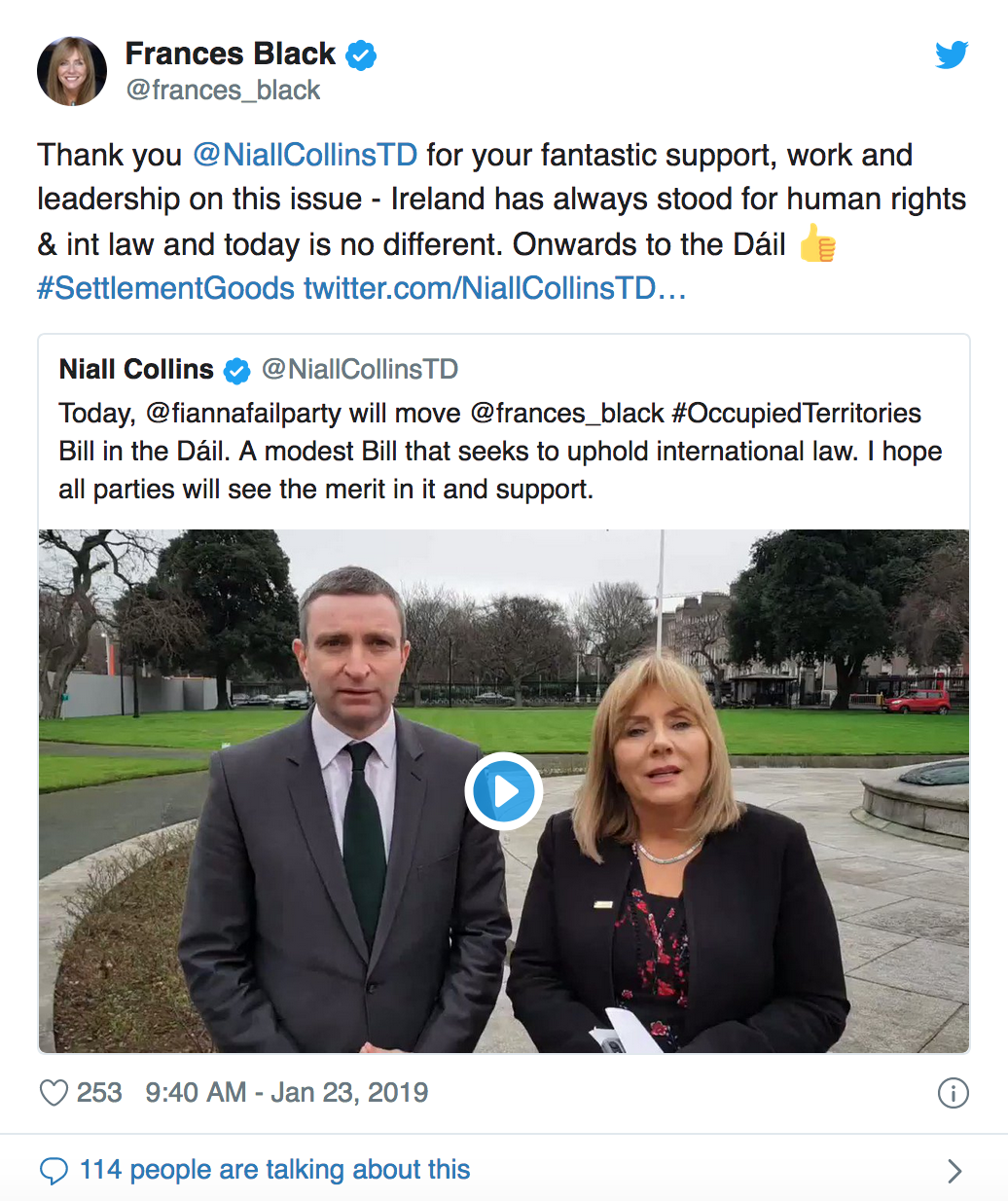 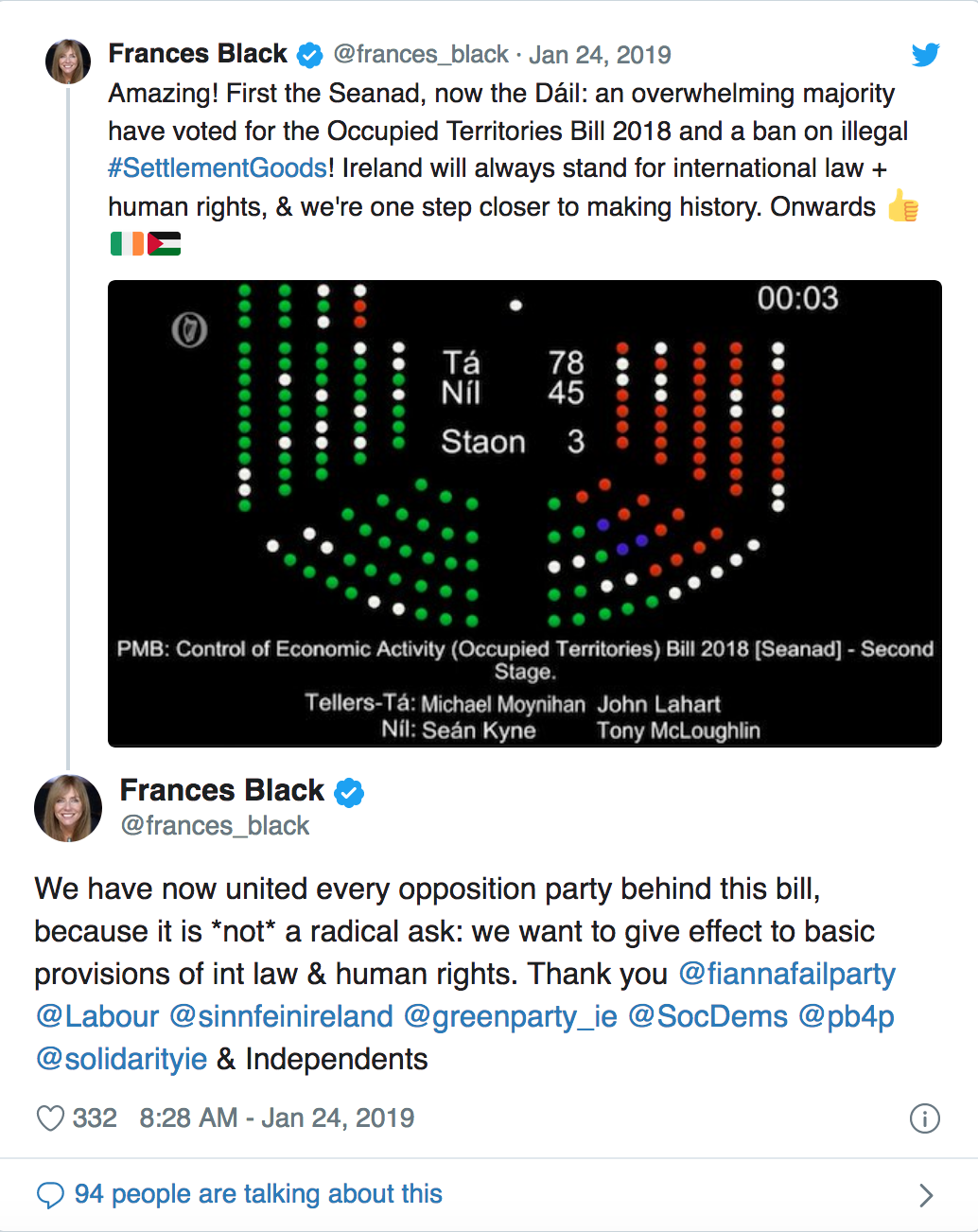 Thursday’s vote is not final, however. The bill must still go to committee and further debate before it can be voted onto the statute books. 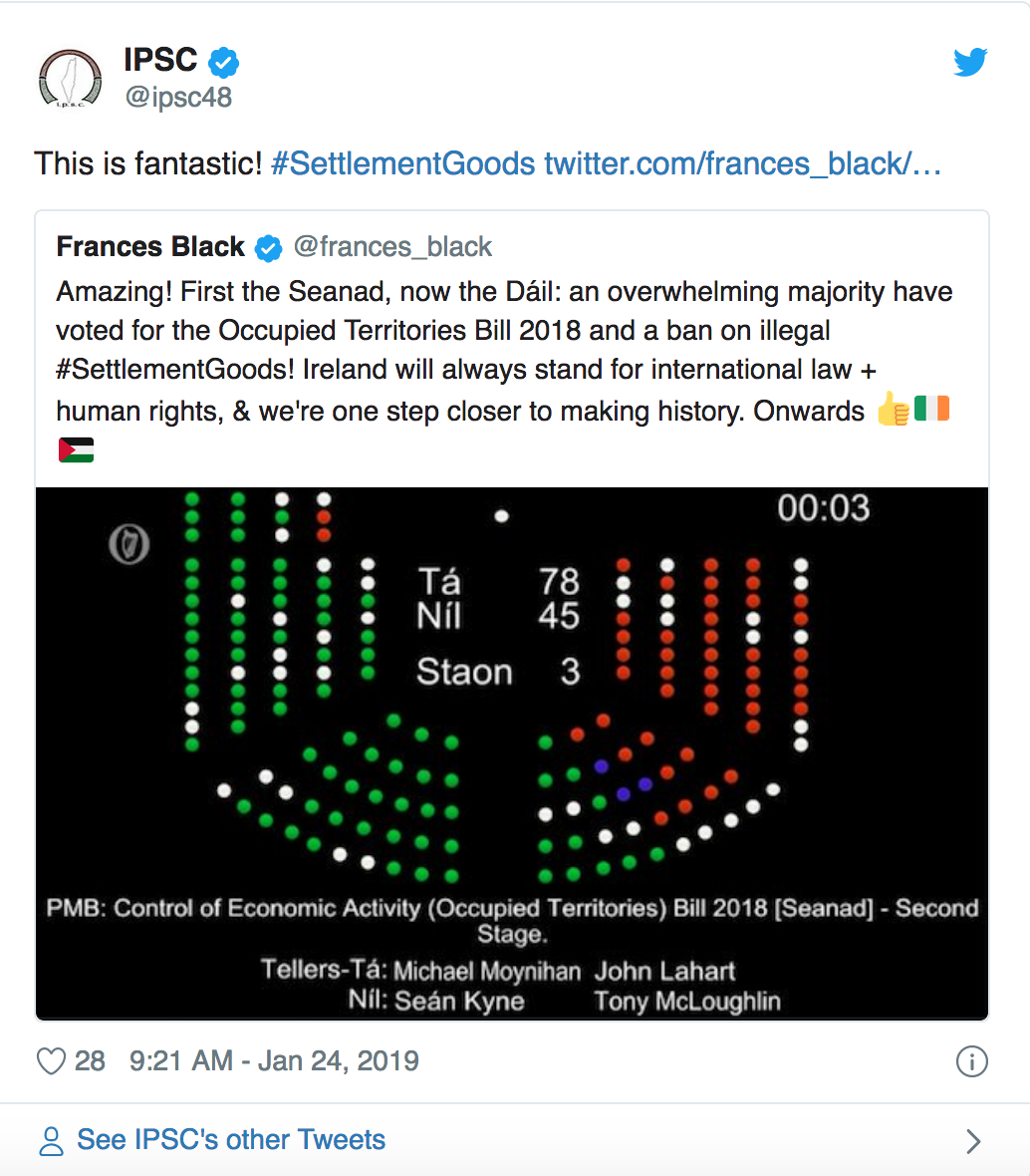 Thank you @NiallCollinsTD & @frances_black for supporting the Occupied Territories Bill and standing up for international law https://t.co/1M94B1MLI2

The victory is all the more significant since Irish politicians faced fierce lobbying from the US Congress not to pass the legislation.

Many thanks to @NiallCollinsTD for introducing the Occupied Territories Bill 2018 into the Irish Dáil & for his recognition of the work of human rights organisations in #Ireland and #Palestine, including Al-Haq's #SettlementGoods @Susanrosepower https://t.co/4pchvl1vT0

During his speech introducing the bill to the Dáil on Wednesday, Fianna Fáil lawmaker Niall Collins paid tribute to human rights and labor groups including Palestine’s Al-Haq, the Irish Congress of Trade Unions, Trócaire, Christian Aid and Sadaka for their work on the legislation.

“If passed, Ireland and her parliament will be sending a strong message, that it condemns the occupation of territories which are deemed illegal under international law,” Collins said.

“Repeated condemnation of Israeli actions by the EU and many in the international community has failed to deter Israel from continuing its settlements project,” Collins said, arguing that action was needed to bring change.

Citing the successful use of sanctions against apartheid South Africa, Collins said that similar tactics could help bring justice for Palestinians.

“We should be brave and bold enough to learn from the experiences of the past and believe that we can bring others with us,” Collins added, urging Irish people not to be cowed by threats of retaliation, such as a withdrawal of US investments.

“While we value the jobs that corporate America brings, it must clean up its act in terms of corporate responsibility, morality and social responsibility in many regards,” Collins said. “We cannot give it a free pass on everything simply because it provides us with jobs.”

Opposing the bill, government minister Ciaran Cannon claimed that banning Israeli settlement goods would be a “betrayal of our principles as members of the European Union.”

78 For 48 Against. Still a long way to go but a signal to the occupiers that there will be economical consequence to apartheid. pic.twitter.com/oJBINNeZIE

But such arguments held little sway.

“We need to send a signal to apartheid Israel that its policy of murder and occupation can no longer go unhindered under international law,” lawmaker Gino Kenny of the People Before Profit party told the house.