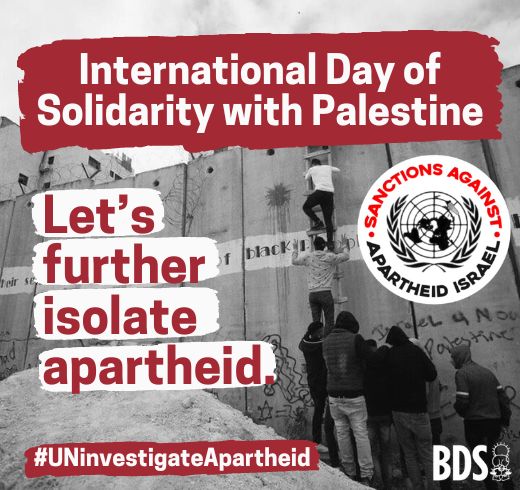 For almost two decades, Palestinians have been building a global grassroots movement to dismantle Israel’s regime of settler colonialism, apartheid and occupation. It is a testament of hope and perseverance that today the recognition of Israel as an apartheid state and the demand for it to be held accountable for this crime against humanity is becoming mainstream worldwide.

International human rights organizations, UN experts and a steadily growing number of states have adopted this framework and endorsed Palestinian civil society demands for accountability and pressure to dismantle apartheid. This mainstreaming is mainly thanks to the collective, strategic and intersectional work carried out globally for over 17 years by the BDS movement and our allies and supporters.

Please donate to help us further grow our movement’s impact.

Just as in southern Africa, relentless indigenous grassroots struggle and meaningful global solidarity have made this year a remarkable one for the Palestinian anti-apartheid struggle to end Israel’s ongoing Nakba. Beginning with Amnesty International’s milestone report on Israel’s apartheid, in high level UN meetings several states have acknowledged and condemned Israel’s apartheid regime and, in some cases, called for international pressure to end it.

In September, as the UN General Assembly was opening its annual session, Palestinian civil society launched a dedicated AntiApartheidMovement.net website as a crucial resource. This was accompanied by a letter to the UNGA with the demand to reactivate its “mechanisms against apartheid, including the revival of the Special Committee Against Apartheid, with a mandate towards eradicating apartheid anywhere it exists around the world, beginning with Israel’s apartheid against the Palestinian people.”

2022 has been a milestone year for the Palestinian anti-apartheid struggle, but the road is still long. We need your support to nourish this struggle and move onwards with more milestones until we dismantle Israel’s regime of settler colonial apartheid. We are counting on your support!

We call on all BDS supporters to help us reach new audiences by forwarding this article to others, helping us to overcome the censorship and outright repression of social media algorithms!