Skip to main content
In the News
This article is reposted from
Ali Abunimah, The Electronic Intifada
, click here to read the original article. 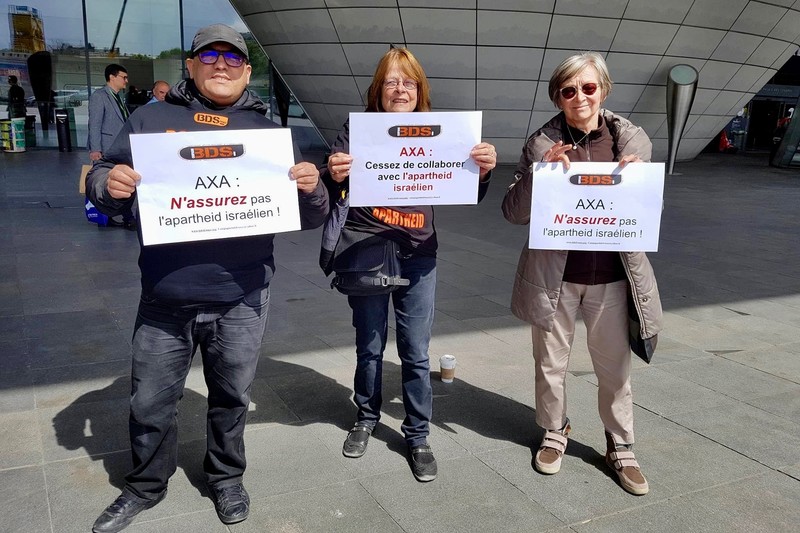 They say that AXA must divest from three Israeli banks – Hapoalim, Leumi and Mizrahi Tefahot – that are involved in Israel’s illegal settlement construction on occupied Palestinian land.

The groups also say that through its subsidiary AB, AXA holds shares in the Israeli arms manufacturer Elbit.

In a statement on Friday, the civil society groups point out that grassroots campaigns have forced several large companies, including Veolia and Orange, to end their involvement in Israeli colonization.

The complicity of Israeli banks has already prompted several major financial institutions around the world to divest from Israeli banks or exclude them from their portfolios.

All big five Israeli banks, including the three in which AXA are invested, are heavily involved in Israel’s illegal colonization of the occupied West Bank.

According to research group Who Profits, “Israeli banks provide the financial infrastructure for all the activities of companies, governmental agencies and individuals linked to the continuing occupation of Palestinian land.”

In January 2016, Human Rights Watch highlighted the role of Israeli banks in settlement activity – a war crime under international law.

The New York-based group urged all corporations to completely end their business activities in Israeli settlements in the occupied West Bank, including Jerusalem.

“Settlement businesses unavoidably contribute to Israeli policies that dispossess and harshly discriminate against Palestinians, while profiting from Israel’s theft of Palestinian land and other resources,” Arvind Ganesan, director of the business and human rights division at Human Rights Watch, said.

The human rights groups held the French state – which regulates financial institutions – responsible for allowing these firms to support Israeli colonization. “The French government must apply pressure to banks and insurance companies to end all their support,” the groups stated.

Large insurance companies have previously been accused of complicity in major crimes against humanity. AXA is one of several large European insurers that reached a deal with the World Jewish Congress almost 20 years ago to pay the life insurance policies of victims of the Nazi Holocaust.

The World Jewish Congress called the deal a victory for “Holocaust survivors and the cause of justice.”

AXA, which operates in dozens of countries and has more than 100 million customers, has endorsed the UN’s Global Compact on sustainable development and committed “to integrate 10 universal principles on human rights, labor, the environment and the fight against corruption” into its corporate social responsibility policy.

These principles include the Universal Declaration of Human Rights.

“AXA’s commitment to respect the 10 principles of the UN Global Compact is an empty shell as long as AXA continues to profit from the oppression of the Palestinian people and the ongoing occupation of Palestinian lands,” the 70 civil society groups state.