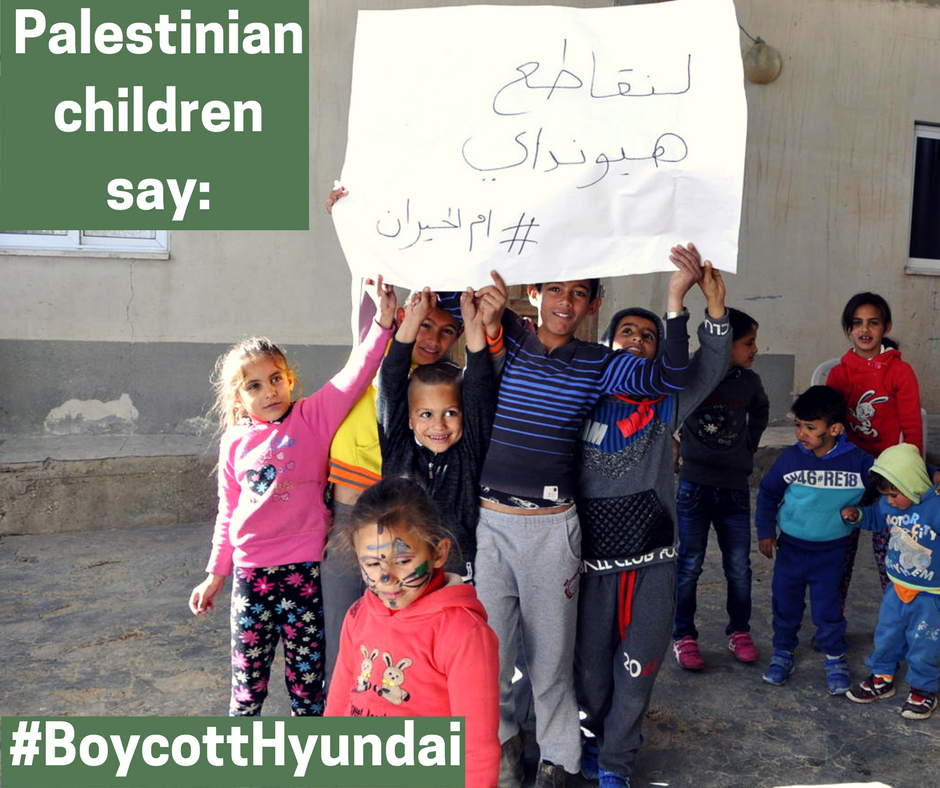 February 7, 2017, Haifa — Today, the Boycott, Divestment and Sanctions Committee of Palestinian Citizens of​ Israel (BDS48) launched a campaign calling on Palestinians, other Arabs, and “people of conscience worldwide” to boycott the products of the South Korean company, Hyundai, until it “ends its involvement in Israeli crimes committed against the Palestinian people, particularly in Jerusalem and the Naqab (Negev).”

BDS48 is a newly-formed group of human rights defenders, founded by Palestinian citizens of Israel. Their #BoycottHyundai campaign is the first such Palestinian-led BDS campaign for corporate responsibility launched from within Israel and specifically focusing on Israeli violations of Palestinian rights beyond the 1967 occupied Palestinian territory.

The call comes in response to the extensive use of Hyundai machinery by Israeli authorities in their recent demolitions of homes belonging to Palestinian citizens of Israel in the Bedouin village of Umm al-Hiran in the Naqab (Negev) and in the city of Qalansawe, further north.

Mohammad Barakeh, the President of the High Follow-Up Committee for Arab Citizens of Israel, the broadest coalition of Palestinian political parties and local councils in Israel, commented:

Hyundai equipment is used by the Israeli government to demolish Palestinian homes on both sides of the Green Line, in what we see as an assault on our lives and our homes. Hyundai is actively complicit in these crimes. We call on Hyundai to stop doing business with any perpetrators of crimes against humans; otherwise, the company will be increasingly recognized as a partner in crime.

A spokesperson for BDS48 explained:

Hyundai has for years ignored the mounting evidence of its persistent complicity in Israel’s ethnic cleansing of Palestinian and Syrian communities in the 1967 occupied territories. It has thus forfeited its responsibilities as stated in the UN Guiding Principles on Business and Human Rights.

BDS48 is launching this Boycott Hyundai campaign as part of the wave of peaceful popular resistance against the recent escalation of the crimes committed by the Israeli regime of oppression against our people. Hyundai is knowingly profiting from Israel’s apartheid policies and serious violations of international law.

A Bedouin Palestinian BDS activist, whose name is withheld for security reasons, stated:

The objective of this bloody Israeli conquest of Umm al-Hiran is to uproot its indigenous Bedouin Palestinian community for the second time since the 1948 Nakba, in order to establish a Jewish-only colony on the ethnically cleansed village’s land. Hyundai is involved in a war crime.

Israel’s latest crime is part of an ongoing policy of ethnic cleansing that Israel has adopted since 1948 and that has led to the forcible displacement of most of the indigenous Palestinian people from our ancestral land. The Nakba continues, and so does our steadfastness and popular resistance.

Israel has more than 60 racist laws that legalize and institutionalize its special form of apartheid against its indigenous Palestinian citizens. As during the global resistance to apartheid in South Africa, we are calling on the world to boycott corporations that are enabling Israeli apartheid. BDS has proven its strategic importance in the struggle for Palestinian freedom, justice and equality.

BDS48 hopes to rally Arab and worldwide support, particularly among churches, labor unions and local councils, for its Boycott Hyundai campaign to pressure the company to end its involvement in Israel's violations of human rights. It is also calling on Korean labor unions to pressure Hyundai to stop “its complicity in Israel’s human rights violations.”

Just as several multinational giants, like Veolia, Orange, CRH, and most recently G4S, were compelled under effective BDS pressure to end their involvement in Israeli crimes against the Palestinian people, so will Hyundai. It is just a matter of time and strategic campaigning.

1)     Hyundai equipment has been used in the demolition of Palestinian homes, particularly in the Jerusalem neighborhoods of Silwan, Beit Hanina, Surbaher, al-Issawiyya and at-Tur. A leading UN official has compared Israeli policies in occupied Jerusalem to the policies of the defunct South African apartheid regime.

2)     Human rights defenders have documented Israel’s use of Hyundai equipment in the construction of Israel’s illegal settlements, such as Halamish, near Ramallah, and the Barkan industrial zone, in the northern West Bank. Israel’s settlement policy, which was recently condemned by the UNSC resolution 2334, constitutes a war crime according to the Rome Statute of the International Criminal Court.

3)     As documented by the human rights organization Adalah, the Israeli authorities allowed the creation of the village, Atir-Umm al-Hiran, to house the Bedouin Palestinians who were forcibly displaced during the 1948 Nakba – and who became citizens of Israel -- from their original village, Khirbet Zubaleh. In 2015, the Israeli Supreme Court ruled in favor of the plan to forcibly displace the Palestinian community again from "Umm al-Hiran" to build a Jewish-only colony called Hiran.

4)     In 2012, then UN Special Rapporteur for the occupied Palestinian territories, international law expert Richard Falk, called on the UN General Assembly to endorse a boycott of international corporations that are complicit in Israel’s crimes against the Palestinian people. Falk’s list of companies included Caterpillar and Volvo, due to their involvement in the construction of Israeli colonies and the demolition of Palestinian homes. Hyundai is accused of involvement in similar crimes.