November 27, 2011
/ By
Palestinian BDS National Committee
/
• Fruit and vegetable imports from Israel facilitate violations of Palestinian rights and international law, European campaigners say • More than 60 actions take place across 10 countries Occupied Palestine, November 27 - A wave of demonstrations, flash mobs and lobby actions by European human rights campaigners, trade unionists, NGOs and faith groups have called for an end to the trade with Israeli agricultural export companies such as Mehadrin and Agrexco over their complicity with Israeli violations of international law and Palestinian rights. The actions, organised under the banner Take

Occupied Palestine, November 27 - A wave of demonstrations, flash mobs and lobby actions by European human rights campaigners, trade unionists, NGOs and faith groups have called for an end to the trade with Israeli agricultural export companies such as Mehadrin and Agrexco over their complicity with Israeli violations of international law and Palestinian rights.

The actions, organised under the banner Take Apartheid off the Menu, timed coincide with the UN Day of Solidarity with the Palestinian People on November 29, aimed to raise awareness about the role Israeli agricultural companies play in the theft of Palestinian land and resources in illegally occupied Palestinian territory and their exploitation of Palestinian workers.

Demonstrations were held outside the British and French headquarters of leading Israeli fruit and vegetable exporter Mehadrin, which exports produce from illegal Israeli colonies in occupied Palestinian territory and works with state owned company Mekerot to deprive Palestinian communities of water. Campaigners in Rome organised a Palestine contingent on a national demonstration for affordable access to water.

Jamal Juma’, coordinator with Stop the Wall, the Palestinian anti-apartheid wall campaign that is currently working to support Al Hadidiye, a Bedouin community in occupied Palestinian territory recently served with demolition orders by the Israeli authorities, said, “The residents of Al Hadidye are denied access to water and can only rear livestock as a result. In the nearby illegal settlements of Ro’I and Beqa’ot, agricultural produce is grown with an abundance of stolen water for export to Europe by Mehadrin and other companies, and it is these companies that stand to benefit from the threatened demolitions at Al Hadidye.”

“Companies like Mehadrin profit from and are often directly involved in the ongoing colonisation of Palestinian land and theft of our resources. Trade with such companies constitutes a major form of support for Israel’s apartheid regime over the Palestinian people and must be brought to an end,” Juma’ added.

Campaigners in Belgium, Britain, Germany, Switzerland, Norway and Sweden picketed supermarkets, calling on consumers to boycott products from Israeli agricultural export companies and on supermarkets to stop selling them. Many focused on Co-Operative supermarkets, which are traditionally thought to have higher ethical standards than other high street supermarkets.

“Popular BDS campaigns and the public pressure that results from them have already forced supermarkets in a number of European countries to implement policies they claim prevent the sale of produce from Israel’s illegal colonies,” said Hind Awwad, coordinator with the Palestinian BDS National Committee.

“But it’s Israel’s agricultural export companies that bear responsibility for complicity with Israel’s violations of international law, not the individual pieces of produce. These companies have been proven to mislead consumers about the origin of the produce they sell. That’s why campaigners are calling for a complete end to trade with these companies,” she added.

In Belgium, campaigners held lobby actions at the offices of the Ministry of the Economy, to protest the sale in Belgian supermarkets of produce grown in Israel’s illegal settlements in occupied Palestinian territory.

“European governments have a duty to hold Israel accountable for its violations of international law but Europe remains the biggest market for Israeli agricultural produce, including produce from illegal Israeli settlements. A ban on trade with Israeli agricultural produce exporters would be in line with stated policies on the illegality of Israel’s illegal settlements,” said Awwad.

In Britain, campaigners also picketed the offices of British subsidiaries of Israeli agricultural companies including Bickel Flowers and Edom. Along with fellow Israeli company Orian, Bickel Flowers recently purchased troubled Israeli export company Agrexco, which was ordered into liquidation after posting record losses and failing to pay its creditors. Campaigners say their European wide campaign against the company, which included popular boycotts, pickets of supermarkets, blockades of company premises and lobbying, was a major factor behind the company’s collapse.

The actions took place as part of the rapidly emerging Palestinian-led movement for boycotts, divestment and sanctions (BDS) against Israel until it complies with international law.

1. An interactive map of all of the actions can be found at http://www.bdsmovement.net/activecamps/take-apartheid-off-the-menu

The company sources produce from illegal settlements, including Beqa'ot in the Jordan Valley. During interviews with researchers, Palestinian workers in the settlement explained they earn as little as €11 per day. Grapes and dates packaged in the settlement were all labelled 'Produce of Israel'.

For more on Mehadrin, see http://www.bdsmovement.net/2011/mehadrin-profile-8450#.Ts-BJXOVtMc

For detailed information about the complicity of other Israeli agricultural produce exporters see http://bit.ly/vIrqLp

3. Agrexco, formerly Israel’s largest agricultural goods exporter, sources products from illegal Israeli settlements and was once responsible for the export of marketing 60-70% of all produce grown in illegal settlements.

For more on the impact of the campaign against Agrexco see

5. Al Hadidiye is a Bedouin community of some 112 permanent inhabitants and some 130 further inhabitants that during the two cold winter months return back to villages near Tobas as Israeli forces have destroyed their homes already and they have not found the necessary means to build shelters that can protect them from the winter cold. On Thursday November 10, the Israeli authorities served the community nine new demolition orders that target 17 structures and will affect 72 people , including women and children. Palestinian organisations have called on supporters of Palestinian rights to contact their embassies in Israel about the proposed demolitions. 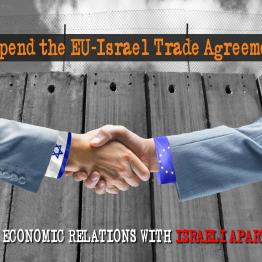