Skip to main content
In the News
This article is reposted from
Columbia Spectator
, click here to read the original article.

November 25, 2019
/ By
Columbia Spectator
/
United States
Columbia College's Student Council overwhelmingly approved a spring student referendum on whether Columbia University should divest from companies that profit from Israel’s acts that fall under UN definition of the Crime of Apartheid. 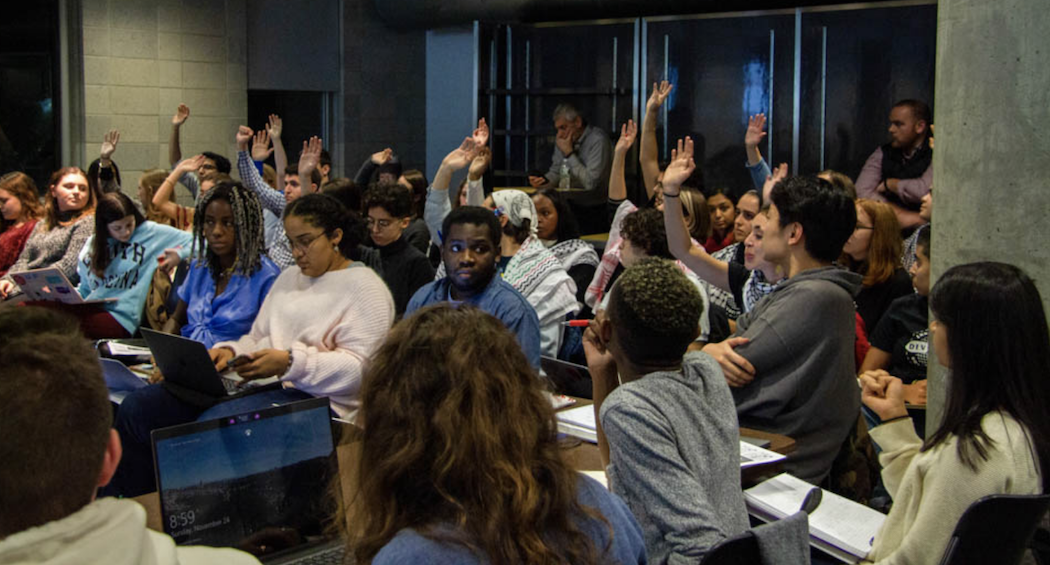 Three years after the ballot initiative was first introduced to the Columbia College Student Council, elected representatives voted 25-12 via a secret ballot in favor of a referendum to gauge student support over whether the University should divest “from companies that profit from or engage in the State of Israel’s acts towards Palestinians that, according to CUAD, fall under the United Nations International Convention on the Suppression and Punishment of the Crime of Apartheid acts against Palestinians.”

Sunday night’s vote follows two earlier efforts by Columbia University Apartheid Divest to pass its ballot initiative through CCSC. Since 2016, CUAD has spearheaded similar initiatives with various student government bodies. In March 2018, Barnard students passed a referendum, with 64.3 percent of voters in favor, that called for the Student Government Association to write a letter to administrators in support of divestment.

Last spring, CCSC voted down the idea of a referendum also by secret ballot—with 20 members against it, 17 in support, and one abstention—a closer margin than that of 2017, in which members voted overwhelmingly against.

In anticipation of Sunday’s meeting, student groups gathered on the fifth floor of Lerner Hall in the Jed. D Satow room both in support of and opposition to the ballot initiative. Before the beginning of the statements, the Satow room quickly reached its capacity, leading over 100 observers to occupy the overflow room to watch the livestream.

Through a series of emotional statements, a number of students in favor of the ballot initiative highlighted the many intersectional identities that are impacted by Israeli occupation. These students pointed to the 34 student groups that have all supported CUAD’s proposal—including the Black Students’ Organization, No Red Tape, and Native American Council—as evidence that the Israel-Palestine debate has a significant presence on campus.

“Just as our oppression is interconnected, so is our solidarity with one another. We hope you bear these truths in mind as the meeting proceeds, even though you might not get the chance to hear from all of these voices tonight,” Nas Abd Elal, CC ’20, a member of Students for Justice in Palestine, said.

Proponents of the ballot initiative also emphasized their belief in the necessity to have campus conversations on these issues and give students the space to express their opinions.

“It is not a matter of silencing the opinions people already hold nationally and on this campus,” Siri Ketha, BC ’23 and member of Students for Justice in Palestine and South Asian Feminisms Alliance, said. “In fact, not allowing this question to pass would be a direct impediment to the so-called dialogue you wish to foster. How could dialogue be fostered if this conversation keeps getting confined to this room specifically?”

Many students in opposition also highlighted the importance of having conversations surrounding these topics, but in a different setting. Although no administrative action is guaranteed following the results of the referendum, some emphasized that even opening up this referendum to students would have negative impacts and divide the student body.

Others—including members of student groups Aryeh, Hillel, J Street CU, and Students Supporting Israel—argued that charged language of the referendum like the word “divest,” which alludes to the BDS movement, would not allow students to engage with the conversation in an objective manner.

“I believe creating such a contentious referendum that clearly creates such a divide among the student body will be mostly counterproductive to efforts which promote unity and healthy discussions,” Hibsoosh said.

In light of the statements, councilmembers reminded the speakers that the council would be voting on whether to gauge students perspective on the issue rather than taking a position in the Israeli-Palestine conflict. University Senator Heven Haile, CC ’21, noted that this was an “issue of democracy” by allowing student debates to be represented.

“I’m a little concerned because if we can’t discuss our values as a society or people on this campus, how can we progress together? And of course this issue is contentious like all important issues are,” Haile said. “We can’t gate-keep the information [the students] are allowed to vote on; that’s not our job.”

For Jesús Guerra Ocampo, CC ’20, the fact that this ballot initiative has been brought up for the past three years is evidence that students are eager to participate in this discussion.

“The way I see it is that the fact that in my four years here at Columbia, that this is the third time that this comes to Columbia College Student Council I think reflects a kind of democratic failure that time and time again students have expressed a desire to know the opinion of the student body and time again this hasn’t been the case and they haven’t been allowed,” Guerra Ocampo said.

Many students in opposition to the ballot initiative cited Barnard President Sian Beilock’s email response to the passage of the referendum by the Barnard student body, in which she said that the college would not take action if asked to do so by SGA due to the small amount of students who voted and pushback from students and alumni. However, Guerra Ocampo said that as a student-facing body, CCSC has the responsibility to communicate high-demand conversations to the administration.

CCSC will add the referendum to the Spring 2020 elections ballot, which usually take place in April, the results of which will be presented to the Advisory Committee on Socially Responsible Investing, which evaluates whether community response indicates that the Columbia community is largely in consensus on a given topic, and thus warrants serious discussion on divestment.

Following the vote, the University released a statement that said that questions of divestment are not decided by the referendum, but through a process involving the ACSRI—pointing out that in the past five years, ACSRI has approved the divestment from private prisons and from public companies whose primary business is the production of thermal coal. If the referendum prompts ACSRI to reconsider Columbia’s investment, the committee will present the proposal to UniversityPresident Lee Bollinger and the board of trustees.

Correction: A previous version of this article incorrectly stated that the referendum characterized Israel’s acts against Palestine as “inhumane."