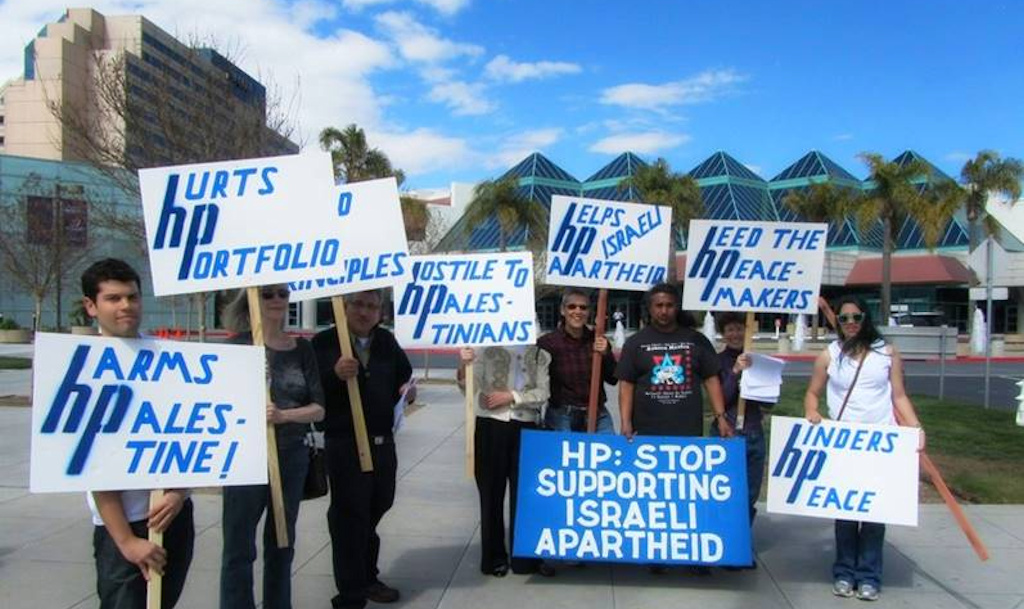 “Respect for human rights is a core value at HPE and integral to the way we do business.”
-Hewlett Packard Enterprise, Living Progress Positions, Policies, and Programs, 2015,  P. 59

“Respect for human rights is essential to the way we do business and approach our value chain.”
-HP Inc. statement on Human Rights, HP Website

“I have visited the Occupied Palestinian Territory, and I have witnessed the racially segregated roads and housing that reminded me so much of the conditions we experienced in South Africa under the racist system of Apartheid. I have witnessed the humiliation of Palestinian men, women, and children … and this humiliation is familiar to me and the many black South Africans who were corralled and regularly insulted by the security forces of the Apartheid government.”
-Archbishop Desmond Tutu[1]

As Palestinian, Israeli and international networks and organizations concerned with human rights, we write today in the hope that you will stand by each of your corporations’ respective written commitments to upholding human rights as illustrated by the two above statements from your own websites.

As the two corporations sharing the HP brand it is incumbent on both HP Inc. and Hewlett Packard Enterprise (HPE) to end the HP brand’s long involvement[2] in violations of Palestinian human rights and provide public and verifiable proof that this complicity has ended.[3]

We recognize your stated commitment to corporate social responsibility, but these statements ring hollow as long as you contravene your own statements by continuing to support and profit from the violations of Palestinian human rights and international law.

HP-related companies have been in receipt of large Israeli government contracts across areas of civil and military administration. The contracts that are in irrefutable contravention to human rights include:

We are hopeful that HP corporations are moving in the right direction. If this is in fact the case please provide publicly verifiable evidence to this effect. Following HPE’s spin off of DXC Technology which could inherit certain contracts with Israel, HPE’s 3 April 2017 statement, “HPE will also maintain a strong relationship with DXC, with agreements in place to support current customers and to grow business over time.”[6] is particularly concerning.

Churches, trade unions, local councils, student governments, and many other civil society entities worldwide will continue to hold HP-branded corporations accountable in diverse ways, including divestment, boycott and institutions declaring themselves HP-Free Zones. It is therefore in the best interest of your corporations and your respective shareholders to ensure that the companies sharing the HP brand publicly and verifiably end all involvement in the restriction of Palestinian human rights.

We look forward to a response at your earliest convenience.

Hewlett-Packard Co. and its successors HP-Enterprise and HP Inc. have profited greatly by selling technology and services to the state of Israel, the Israeli military and municipal governments of illegal Israeli settlements in the West Bank. Israel’s regime is characterized by systematic and widespread denial of basic rights and freedoms based on ethnicity and religion through racial profiling, institutionalized racial discrimination and segregation, forcible transfer of populations, mass incarceration, torture, and state violence.[7] [8] [9]

HP-branded companies have been in receipt of large government contracts for systems and services with Israel across areas of civil and military administration. These HP systems and services constitute material support of Israel’s flagrant breaches of the Fourth Geneva Convention and international human rights conventions. They are incompatible with HP’s binding obligations under the UN Global Compact and the UN Guiding Principles on Business and Human Rights to respect International Humanitarian Law (IHL) and human rights.

These systems and services could, moreover, implicate HP companies in aiding, abetting, or assisting in war crimes and crimes against humanity such as indiscriminate and deliberate use of armed force against Palestinian civilians, torture, apartheid, and forcible transfer of populations; as well as breaches of the United Nations Convention on the Rights of the Child, the International Covenant on Civil and Political Rights, and the International Covenant on Economic, Social, and Cultural Rights.

HP-branded companies have contracted with the Israel Prison Service (IPS) to provide and maintain servers in prisons and to design and implement human resource and prison management systems. Israel has a widespread and well documented history of unlawful arrest and detention of Palestinians, denial of fair trial rights, and ill-treatment and torture of Palestinian prisoners, including children.[10] With these practices, Israel is in breach of multiple provisions of the International Covenant on Civil and Political Rights, the Convention against Torture, the Convention on the Rights of the Child, and the Fourth Geneva Convention.

In light of the long history of close HP connections with Israel’s military and occupation prior to and since the HP Inc./HP-E split, the continuation of both corporations to use the HP brand, ongoing corporate restructuring of HP-E, and a lack of basic transparency and responsiveness to public concerns on the matter, it is imperative that all companies using the HP brand clearly, publicly, and completely step away from involvement in Israel’s projects that violate international law and Palestinian human rights by ending all of the above named contracts as well as any ongoing relationship with corporations such as DXC Technology which may take ownership of these contracts from an HP branded corporation.[11]

The international Boycott, Divestment, Sanctions (BDS) campaign calling on HP-branded corporations to stop profiting from Israeli human rights violations against Palestinians has been going on for several years. Many campus groups, churches, municipalities, and other entities have targeted HP companies for boycott and divestment including the Presbyterian Church (USA); United Church of Christ; Quaker Friends Fiduciary Corporation; the Unitarian Universalist Association; the Mennonite Church Central Committee; Portland, Oregon’s Human Rights Commission; and dozens of student governments on campuses nationwide including Princeton, Northwestern, and the University of California.[12] [13] More and more church congregations are declaring themselves HP-free.[14] Nearly 1.8 million people have signed a petition calling on HP to end its role in violating Palestinian human rights.[15] Most recently, the National Union of Teachers in the UK, representing about 400,000 members, declared itself an HP-Free Zone.[16]

In 2012, prior to HP’s split, UN special rapporteur on human rights in the Palestinian Territories Richard Falk specifically highlighted HP as a recommended target for boycotts due to HP’s ongoing operations with Israel’s illegal settlements.[17] [18] Similar boycotts targeting French company Veolia Environnement[19] and British security company G4S[20] have led to billions of dollars in lost contracts before both multinationals eventually took steps to end or significantly reduce their complicity with Israeli apartheid.