Know More
In the News
This article is reposted from
Artists for Palestine UK
, click here to read the original article.

Chomsky clarifies position on the cultural boycott of Israel

Prof. Noam Chomsky makes the essential point: the presence of international artists in Israel is used by the government to cover up its occupation and human rights abuses. 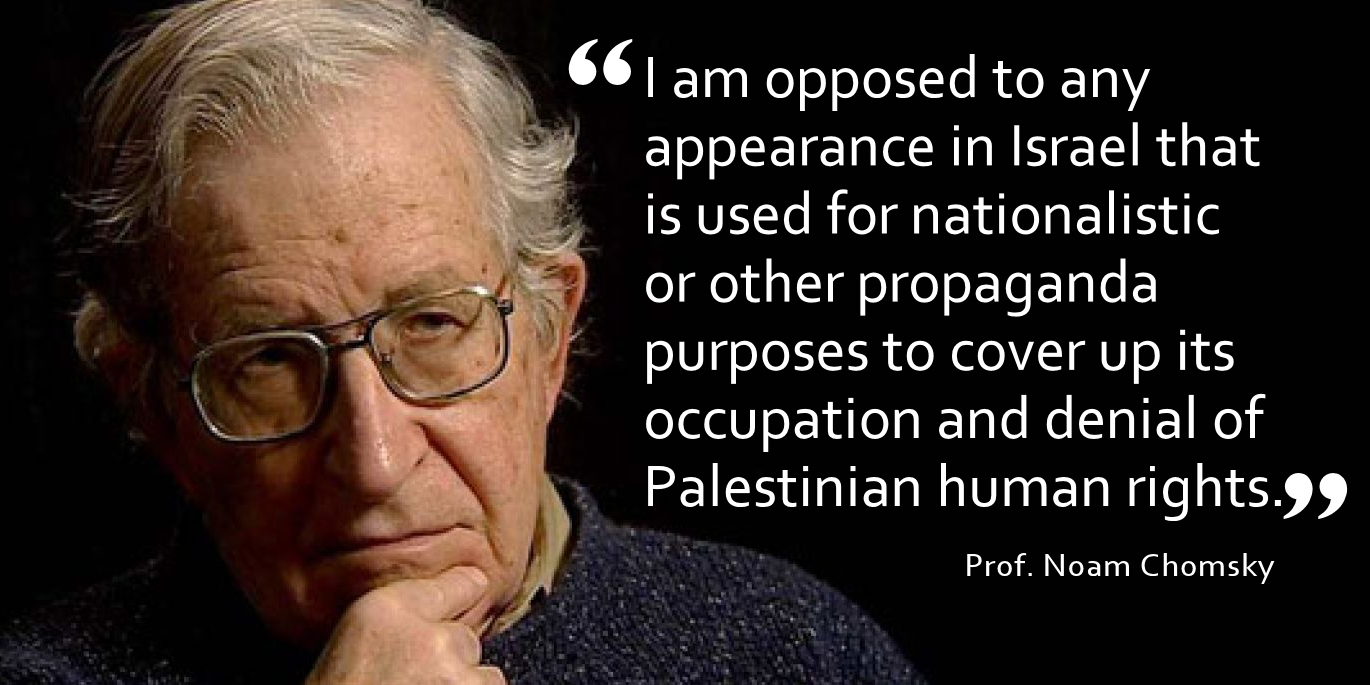 For years, people promoting the mantras of ‘constructive engagement’ and ‘bridge-building’ with Israel have cited Professor Noam Chomsky in their defence. He is alleged to oppose the campaign of Boycott, Divestment and Sanctions (BDS) launched by Palestinian civil society in 2005.

Artists for Palestine UK contacted Professor Chomsky to ask him to clarify his position.

He has given us this statement:

‘I am opposed to any appearance in Israel that is used for nationalistic or other propaganda purposes to cover up its occupation and denial of Palestinian human rights. I’ve been involved in activities to hold Israel accountable for its international law violations since before the BDS movement took shape. While I have some tactical differences with the BDS movement, I strongly support the actions and continue to participate in them.’

Asked about arguments that invoke Israel’s purported democracy, he said:

‘The oft repeated idea that Israel is a “vibrant democracy” is an absurd one. Unless the qualification is purely symbolic, there can be no “democratic Jewish (Christian, Muslim, white) state”. In the case of Israel, the “Jewishness” is very far from symbolic. There is no need to repeat here what I’ve written in the past, documenting extensively Israel’s discriminatory practices.’

APUK thanks Professor Chomsky for his clarification, and respectfully draws the attention of any artist contemplating performing or exhibiting in Israel to the essential point he makes: that the presence of international artists in Israel is used by the government to cover up its occupation and human rights abuses.

Radiohead dismissed appeals from Palestinians and artists around the world to cancel their Tel Aviv concert in July this year, with singer Thom Yorke arguing that Radiohead did not ‘endorse Netanyahu’. But as APUK has shown, Netanyahu’s government certainly endorsed Radiohead, with Israeli politicians and diplomatic missions loudly promoting the group’s anti-boycott stance. All major artists who appear in Israel are likely to find themselves similarly hailed, with every performance considered a victory by Israel’s apartheid regime.

We hope that Professor Chomsky’s clarification encourages international artists to respect the call from their Palestinian counterparts to refrain from performing in Israel until it ends its violations of international law.