Call out: Turning the tide against Israel's criminal repression

Palestinians are continuing to confront Israel’s occupation and apartheid policies at demonstrations and with myriad creative actions that are taking place at more than 65 locations across historic Palestine and in neighbouring Arab countries. Some demonstrations have attracted more than 20,000 people.

This uprising is led by a generation of fearless young Palestinian Davids who are no longer intimidated by the brutality of the Israeli Goliath and who are asserting their right to self-determination and freedom. It comes as a response to the escalation of Israel’s criminal attacks on and ethnic cleansing of Palestinians.

Israel’s response to this mass popular rebellion against its oppression has been criminal and ruthless. Since October 1st, more than 49 Palestinians have been killed, including 10 children, shot by Israeli occupation forces during protests or executed. A further 500 Palestinians have been injured by live ammunition and rubber-coated metal bullets, among thousands of other injuries. Israel has also escalated its collective punishment against Palestinian communities, especially in occupied East Jerusalem, including the Old City, and Hebron.

The Palestinian BDS National Committee (BNC), a broad coalition of Palestinian unions and organisations which leads the global BDS movement, called last week for a wave of BDS solidarity with Palestinian popular resistance to injustice. The #SolidarityWaveBDS specifically called on people of conscience to translate their solidarity into campaigning pressure on governments, institutions and corporations to end their role in Israel’s egregious violations of international law.

The wave of solidarity that is unfolding across the globe is impressive. Tens of thousands of people across 100 cities took to the streets to show Israel that it will be held to account for its crimes against the Palestinians. But mainstream media coverage has remained largely biased, parroting Israel’s propaganda, removing the current Palestinian upheaval from its context of Israeli colonialism, and inverting the roles of victim and perpetrator.

The BNC hopes to work with activists and international civil society to ensure that popular protests and actions in support of Palestinian popular resistance continue to grow and to integrate media outreach. The voice of the Palestinian people and of the millions around the world that support our struggle for freedom, justice and dignity must become focused and loud enough to counter the well-oiled Israeli propaganda machine and break through the prevailing media bias. Let us also enhance our advantage in social media and use that to offset the imbalance in corporate media.

Most urgently, let us up the pressure on governments and companies to cut their ties with Israel’s military, weapons companies and military research facilities. As the struggle against apartheid South Africa proves, a military embargo is necessary to weaken the regime of oppression.

When Israel attacks Palestinian protestors, killing them in the street, it uses weapons imported from around the world. When it imposes effective lock downs on entire neighbourhoods and suffocates the Palestinian population in Jerusalem to force them to push them out of the occupied city, it tests and develops new and more sophisticated repression and control mechanisms and technologies that it then sells as “field tested” at high profits. Israel is exporting its patently criminal model of militarization and securitization, bolstering repression and discriminatory policies around the globe.

By importing arms from Israel, exporting arms to it, or conducting joint military research with its universities, governments and institutions are enabling Israel’s ongoing regime of oppression and giving it a green light to act with impunity.

Let us join together to continue our wave of solidarity with the Palestinian popular struggle and take action to end international support for Israel’s system of occupation, apartheid and settler-colonialism. 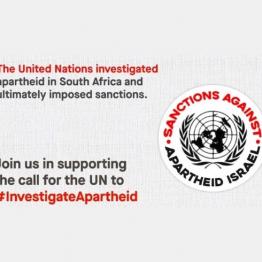