August 14, 2014
/ By
Charlotte Silver at Electronic Intifada
/
Also read: British arms sales to Israel face high court challenge Britain remains determined to keep on arming Israel, judging by a decision taken by one of the most senior figures in the UK government this week. Vince Cable, the business secretary, has reviewed 130 licenses granted for exporting British weapons to Israel.

Britain remains determined to keep on arming Israel, judging by a decision taken by one of the most senior figures in the UK government this week.

Vince Cable, the business secretary, has reviewed 130 licenses granted for exporting British weapons to Israel. On Tuesday, he announced that just twelve of these licenses would be suspended “in the event of a resumption of significant hostilities.”

This means that if the current “truce” between Israel and Hamas holds, then Britain will deliver all the military equipment that Israel has ordered. Israel will be able to prepare for its next offensive against Gaza, with the aid of British weaponry.

The Campaign Against the Arms Trade (CAAT) in London has complained that Cable’s decision was “not good enough.” Andrew Smith, a spokesperson for CAAT, called on the government to announce a “full embargo on all arms sales to Israel as well as an end to all military-industrial collaboration with Israel.”

Cable’s stance is a case of broken promises. His party, the Liberal Democrats, had urged that Britain cease selling arms to Israel in early 2009 (as a response to Operation Cast Lead, a three-week bombardment of Gaza).

The Lib Dems were in opposition then. Now that they are in government, Cable appears more interested in pleasing arms-dealers than honoring commitments to defend human rights.

Yet Cable has been consistent in terms of government behavior.

After providing the Israeli military arms that were used during Cast Lead, the UK reviewed its licenses for arms exports and revoked five used by the Israeli Navy.

A British parliamentary committee on arms exports wrote in its 2010 annual report: “It is regrettable that arms exports to Israel were almost certainly used in Operation Cast Lead.”

In January 2010, Ivan Lewis, then a minister of state for the Foreign Office, stated that “The whole point of the review process was to look at the lessons learned from a particular conflict and to use those lessons as an additional safeguard to the consolidated criteria.”

The lesson learned was limited: Lewis emphasized there would “not be any arms embargo against Israel” as the British government was “firmly of the view that Israel faces real threats.”

And indeed, four years later — on 2 August 2014 — CAAT revealed that the UK’s exports of military wares to Israel since 2010 were valued at £42 million ($70 million). The revelation came three weeks after Israel had commenced its massive assault on Gaza.

Yet another review was then announced, again with the proviso that Israel has a “legitimate right to self-defense.”

Former foreign office minister Sayeeda Warsi argued that arms exports to Israel “must stop.” Last week, Warsi resigned from the government in protest over Britain’s approach to the attack on Gaza, describing it as “morally indefensible.”

Furthermore, when Cable announced the possible suspension of licenses he echoed Israel’s claims that its bombing of hospitals and schools in Gaza was an act of defense, stating, “the vast majority of exports currently licensed for Israel are not for items that could be used by Israeli forces in operations in Gaza in response to attacks by Hamas.”

CAAT has documented that UK companies or companies with UK factories have provided the Israeli military with equipment for drones, armored tanks, targeting systems and ammunition — in other words helped equip Israel’s arsenal that has killed almost 2,000 Palestinians in one month.

Israel has been named by Britain as one of 27 countries with human rights concerns to which the UK nevertheless exports arms equipment. Israel is by far the largest recipient of those countries, netting nearly £8 billion ($13.3 billion) from a total of 470 export licenses, as of 14 July 2014, when a parliamentary committee published its “scrutiny of arms export and arms control” report.

This is, notably, a 23 percent rise from the previous year. Last year, the government stated that it was “satisfied that none of the currently extant licences for Israel and the occupied Palestinian territories contravenes its policy [for arms exports]” while acknowledging that “circumstances can and do rapidly change, leading to a reassessment of risk and, in some cases, a different decision using the same criteria.”

Since 2000, the UK has had a standing policy that it would not export arms that would be used in the occupied West Bank and Gaza, despite the difficulty in discerning which arms were used against Palestinians. That policy didn’t prevent the export of arms to Israel: in 2002, CAAT reported that between 2000 and 2001, arms exports to Israel from the UK nearly doubled, from £12.5 million ($20.8 million) to £22.5 million ($37.5 million).

In July 2002, the UK government introduced new guidelines that allowed it to circumvent these export restrictions to Israel, and sell components to the US that were then used in F-16 warplanes headed for Israel. While this policy was contested by many members of parliament, it has remained in force.

In April 2009, David Miliband, then foreign secretary, stated that the UK “almost certainly” provided components for F-16 jets and Apache helicopters that were sold first to the United States on aircrafts “destined for Israel.”

Government representatives have explained that all arms licenses are considered on a case-by-case basis. But it would seem that the UK is following a pattern of arming first and only revoking the license after Israel has laid waste to Palestinian lives.

In the summer of last year, the UK announced that, after “careful consideration,” it would export a Joint Strike Fighter aircraft to Israel.

On 30 July 2013, Vince Cable stated that Israel was expected to take delivery of its first aircraft in 2016. “At this time we do not believe there is a clear risk that the JSF would be used for internal repression, would aggravate existing internal tensions or conflict, or be used aggressively against another state,” he added.

With such reluctance on the part of the UK to withhold its contributions to Israel’s massive arsenal and such willingness to believe in Israel’s virtue, how many more “lessons” will the UK need to understand what Israel does with its weapons. 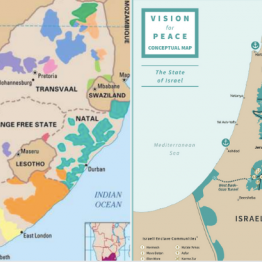 BDS is the most effective response to Trump's apartheid plan