Palestinians urge conscientious Arab and international authors to withdraw from UAE dictatorship-sponsored Emirates Lit Fest. The festival is a clear attempt to whitewash the UAE's human rights atrocities while normalizing its alliance with apartheid Israel. 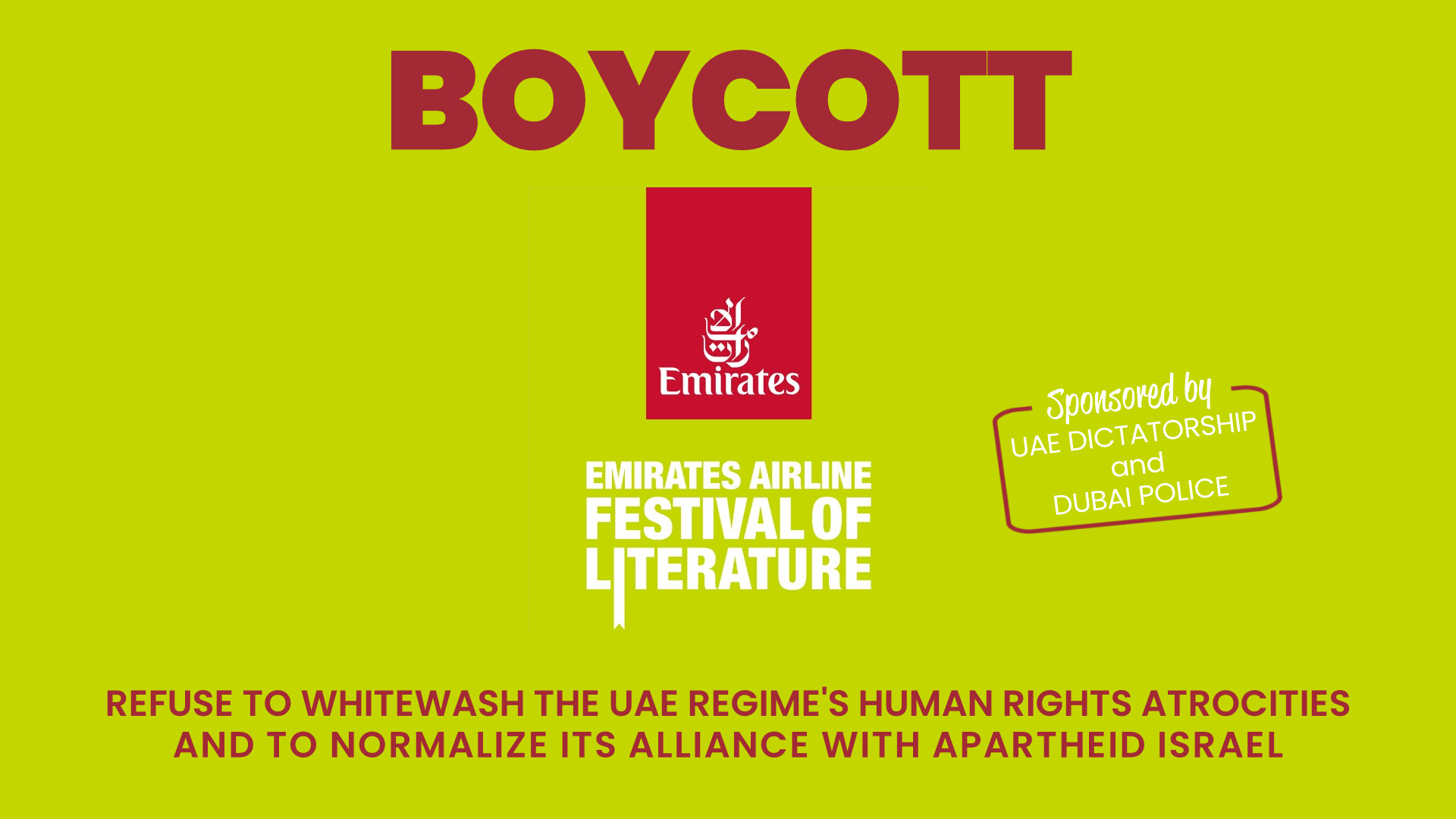 The Palestinian Campaign for Academic and Cultural Boycott of Israel (PACBI) calls on all conscientious Arab and international authors to withdraw from the “Emirates Airline Festival of Literature 2022,” which is set to start on February 3rd.

This festival, predominantly sponsored by the UAE dictatorship, including the Dubai police and the Government of Dubai, is a clear attempt to whitewash its brutal violations of human rights. By inviting – with a lot of fanfare – Israelis who publicly oppose basic Palestinian rights under international law, the festival also attempts to normalize the regime’s military-security alliance with Israel’s regime of settler-colonialism and apartheid.

In addition to this festival being an attempt to normalize[1] Israel in an Arab country and for an Arab public, it is also part and parcel of the UAE regime’s policy of artwashing and sportswashing its war crimes in Yemen, and its horrific domestic human rights record, including criminal oppression of migrant workers, mostly from South Asian countries, and its systematic discrimination against women.

PACBI, a key part of the BDS movement for Palestinian rights, stands alongside international human rights organizations and advocates in calling on all those invited to the Emirates festival and similar events sponsored by the UAE regime to distance themselves from these whitewashing attempts.

More than a year after signing the Trump championed “Abraham accords” with Arab dictatorships in the UAE, Bahrain, Morocco and Sudan, Israel has only exacerbated militarization, mass surveillance and ruthless human rights violations in these countries. The overwhelming majority of people in the Arab region, with a long experience of Israeli aggression and military occupation, as well as Israeli support for authoritarian regimes, have rejected these normalization agreements and called for wide boycotts against all entities and activities that promote them.

It is time to put pressure on the UAE regime to desist from its myriad human rights violations and to rescind its relations with Israel and its shameless attempts to normalize the abnormal. It is time to boycott all UAE regime sponsored events in solidarity with Yemeni and Palestinian people, and with the majority of people in the UAE, including migrant workers.

[1] An example of a boycottable normalization project would be a joint event that is designed explicitly to bring together Palestinians/Arabs and Israelis so they can present their respective narratives or perspectives, or to work toward reconciliation without addressing the root causes of injustice. However, a joint project is not boycottable if: (a) the Israeli party in the project recognizes the comprehensive Palestinian rights under international law (corresponding to the 3 rights in the BDS call); and (b) the project/activity is one of “co-resistance” to oppression rather than “co-existence” under oppression.