Skip to main content
In the News
This article is reposted from
David Palumbo-Liu
, click here to read the original article.

The BDS struggle in US academia

A new generation of scholars continues the push for the academic boycott of Israel, despite setbacks and strong lobbies. 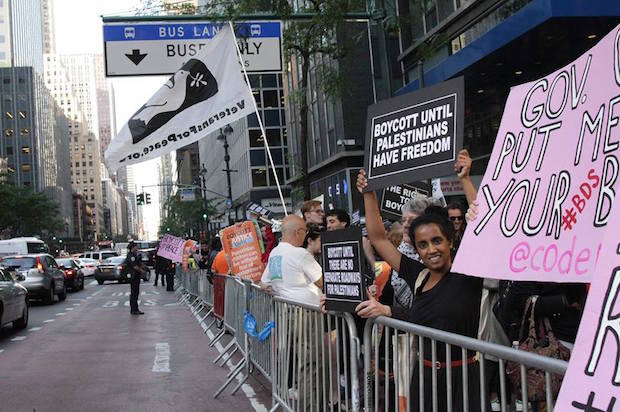 On January 7, the Delegate Assembly of the Modern Language Association (MLA) voted against a non-binding resolution to endorse the call from Palestinian civil society for the academic boycott of Israeli institutions (Yes, 79; No, 113). At that same session, the Assembly voted for a resolution to condemn the boycott (Yes, 101; No, 93).

One of the reasons it is difficult for those supporting Boycott, Divestment and Sanctions (BDS) to get their motions passed is that external organisations here and in Israel add their resources and legal teams to the anti-boycott side.

But another reason such boycotts are hard to pass in these large and traditional organisations is that they are averse to acting politically. This sometimes takes very particular forms.The Brandeis Center threatening a lawsuit against the MLA if it lets the vote go forward, the collaboration of a group of university heads in Israel, anxious about the pro-boycott connecting their universities to the maintenance of the occupation, and other repressive measures also aided the fight against the boycott. As reported in Ynet, one Israeli group declared that "the fight was … assisted by various Jewish organisations, along with The Committee of University Heads in Israel."

For example, in the 1980s the MLA also refused to endorse the anti-apartheid boycott, which is now of course regarded as a major factor in ending the apartheid regime in South Africa, on the grounds that the MLA did not do politics. Yet at its January meeting the majority of MLA delegates made a political declaration to protect themselves from potential attacks on speech, racism, and travel which might emanate from the new Trump administration - it issued a strong critique of our new president.

Professor David Lloyd noted the irony of the voting down of the boycott resolution coinciding with the passage of this resolution critical of Trump:

"The resolution expresses concern that the incoming Trump administration will threaten these freedoms that we cherish. But we should recall that during his campaign, it was Israel that Trump invoked as his model for successful racial profiling. It was Israel that he praised for knowing how to build a wall that would deny freedom of movement on the basis of national origin, race and ethnic identity.  He praised Israel's discriminatory immigration policies that arbitrarily deny entry to Muslims and people of Arab origin. It is hard not to feel the hypocrisy of passing a resolution like this while denying our support to Palestinians who do not face a potential threat, but actually suffer the denials of academic and every other freedom that we are privileged to enjoy."

There is one further irony: The anti-boycott resolution now to be voted on by all MLA members amounts to a prohibition of a mode of protest that the US Supreme Court has declared a constitutionally protected form of free speech. In passing that resolution, the MLA will be doing Trump's work for him. In fact, one opponent of the boycott said its supporters were merely being "politically correct".

A new generation of scholars

Why all this concern over which resolutions academic organisations with little political clout or influence issue?

One reason is that they are a barometer of how different generations and demographics of younger scholars, who are, after all, future teachers, are positioning themselves on the issue of Israel-Palestine.

This generational issue connects with an ideological one as well, and serves as another index to the gradual shift in American public opinion with regard to Palestine.

They are also important because symbolic acts of solidarity coming from learned societies matter, both in and of themselves and also in conjunction with similar acts of solidary emanating from religious groups, municipalities, unions, and others, across the globe.

The Israeli regime, and the Trump administration, know this well, and have pledged to destroy BDS, such is its real danger to the status quo.

Finally, the academy is a powerful site where ideas are tested, assumptions questioned, and habits of thought challenged, and the organisations and scholars that have endorsed the boycott show a willingness to do so with regard to Israel-Palestine, unlike their older, more traditional, and largely white counterparts.

Comprised of minorities, younger scholars, and progressives, these organisations are fully exploiting the power of the academy to challenge the status quo, especially when it comes to injustice and privilege. They are undeterred and unsurprised by negative votes such as the MLA's.

They understand that, as the International Covenant on Social, Economic, and Cultural Rights indicates, the right to education opens on to other essential rights: "Education shall be directed to the full development of the human personality and the sense of its dignity, and shall strengthen the respect for human rights and fundamental freedoms."

So when academic organisations such as the ones mentioned endorse the Palestinian call for rights, it is recognising precisely the essential link between the right to education and human rights and to the right to participate in building a social and political world in general.

It is they who are the hope for liberation.