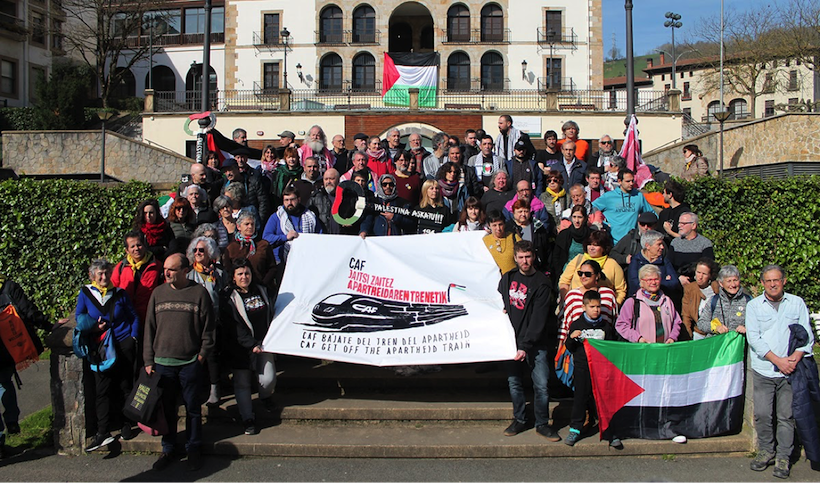 In 2017, Israel approved the tender for the extension of the Jerusalem tram, known as the Jerusalem Light Rail (JLR), a process for which, among others, the Basque company based in Beasain CAF - Construction and Railroad Auxiliary was bidding. It is a project that is contrary to international law and a new attack on the rights of the Palestinian people, as it seeks to connect Jerusalem with Israeli settlements and thus annex even more militarily occupied Palestinian territory, where more than 600,000 illegal settlers already live.

During the bidding process there were numerous international companies that withdrew from the contest, some citing their concern over the violation of international law: Bombardier, Macquarie, Siemens, Alsthom and Systra, a subsidiary of the French state-owned railway company SNCF. Also City-Pass, the company that currently operates the JLR Red Line, resigned from participating in the tender.

In August, Israel’s Ministry of Finance chose the CAF consortium and the Israeli infrastructure company Shapir to expand the illegal settlement railway project. The $1.8 billion contract will be used to extend the railroad to more illegal Israeli settlements in the occupied Palestinian territory, particularly in East Jerusalem, and to strengthen transportation between those illegal settlements and West Jerusalem.

The CAF company committee in Beasain has repeatedly requested the CAF management to withdraw from the tender. Two unions in Zaragoza, the Independent Group and CGT, which represent the workers in the CAF factory that would build equipment for the JLR, said CAF should withdraw from the project, because it is a "colonial criminal act against the state of Palestine." Even so, turning a deaf ear to the demands of its workers and civil society, CAF has moved forward with its participation in the contract and is already complicit in the occupation in Palestine.

It should be noted that Israeli settlements in occupied Palestinian territory, including East Jerusalem, are illegal under international law as they violate the Fourth Geneva Convention. Likewise, this tram clearly entrenches Israeli apartheid: it is designed to exclude Palestinian neighborhoods and to gather settlements and connect them with each other and with West Jerusalem.

In addition, by carrying out this project CAF is violating its own code of conduct which says that "any action by CAF and its members will scrupulously respect laws, human rights and public liberties." The Basque Autonomous Community government has shares in CAF, which should ensure that no public money supports the illegal occupation of Palestine. There is the precedent of the French multinational Veolia that in 2015 had to sell all its investments in Israel (including that of the Jerusalem tram) due to the billions in losses generated by the campaign for Boycott, Divestment and Sanctions (BDS) of the State of Israel.

The signatory entities throughout Euskal Herria (Basque Country) request that CAF comply with international law, withdraw from the Jerusalem Tram project and thus end complicity in the occupation of Palestine.