An Appeal to the South Korean EBS International Documentary Festival: Do Not Celebrate Israeli Colonialism, Ethnic Cleansing and Apartheid!

August 11, 2014
/ By
Palestinian Campaign for the Academic and Cultural Boycott of Israel (PACBI)
/
South Korea

The Palestinian Campaign for the Academic and Cultural Boycott of Israel (PACBI) is gravely alarmed that the 11th EBS (South Korea Educational Broadcasting System) International Documentary Festival taking place in Seoul between 25-31 August 2014, is to include a conference on the theme of ‘the frontier of world documentary – Israel’. The festival is also sponsored by the Israeli embassy in Seoul. 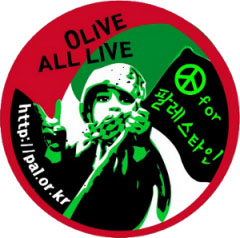 The Palestinian Campaign for the Academic and Cultural Boycott of Israel (PACBI) is gravely alarmed that the 11th EBS (South Korea Educational Broadcasting System) International Documentary Festival taking place in Seoul between 25-31 August 2014, is to include a conference on the theme of 'the frontier of world documentary – Israel’. The festival is also sponsored by the Israeli embassy in Seoul.[i]

We appeal to the organizers, the South Korea Educational Broadcasting System, to cancel Israel’s participation and refuse the sponsorship of the Israeli embassy. At a time when Israel is waging a vicious aggression on the Gaza Strip killing at least 1,938 Palestinians, including 460 children, and injuring thousands, Israel’s sponsorship and participation in this festival sends a strong signal to the Palestinians that Korea’s cultural scene endorses Israel’s vicious actions. Israel’s assault on the Gaza Strip, described as a “war on children”[ii] by Save the Children, has also displaced nearly half a million Palestinians[iii], leaving everyone, including those who are displaced with no safe place to go.[iv] The latest racist Israeli chant[v]mocking the hundreds of Palestinian children murdered by Israel during its current massacre in Gaza notes[vi].

“Tomorrow there’s no school in Gaza, they don’t have any children left.”

We call upon filmmakers and audiences to boycott the festival if Israel’s participation and sponsorship is upheld, as it extends a gesture of “goodwill” to a colonial and apartheid regime which is violating Palestinian human rights with utter impunity and viciousness.

According to the festival’s program, the conference is to provide a 'meaningful attempt to explore the network of a country which owns an advanced content’s eco-system in terms of production, funding and public support and distribution.’[vii] The 'network and system’ celebrated by the festival is in fact based on the erasure of the physical presence of the Palestinians, their culture, heritage and memory. Over the past 20 years, Israel has intensified its construction of illegal colonies in the occupied Palestinian territory.  Its wall, condemned as illegal by the International Court of Justice in 2004, is still standing and expanding, separating Palestinians from their livelihoods, schools and farms.  Israel’s ethnic cleansing of Palestinian communities in the Naqab (Negev), East Jerusalem and the Jordan Valley was condemned by a ranking UN official as constituting a strategy of exclusion and discrimination.[viii]  Its policy of home demolitions, uprooting trees and denial of freedom of movement have intensified in recent months.  It still maintains more than 50 racist laws[ix] that are condemned by international and local human rights organizations.  Even the U.S. Department of State has censured Israel’s system of “institutional, legal and societal” discrimination against Palestinian citizens of the state.

Why would you accept to host the contribution of a country that is so deeply involved in war crimes and human rights violations? Welcoming Israel’s participation and sponsorship at this time is morally equivalent to welcoming South Africa during the apartheid era. As Archbishop Desmond Tutu, UN Special Rapporteur on human rights Prof. John Dugard, and South African government minister Ronnie Kasrils have repeatedly declared, Israel has created a worse system of apartheid than anything that ever existed in South Africa.

Israel has redoubled its effort to “brand” itself as an enlightened liberal democracy.[xi] Arts and culture play a unique role in this branding campaign,[xii]

whereby the participation of Israel in international cultural forums is meant to whitewash its crimes abroad. Hence, it should not be business as usual with a state that routinely violates international law and basic human rights. Your festival will be used as a publicity tool by the Israeli government.

PACBI and the broader BDS movement, representing the absolute majority of Palestinian civil society, appeal to you to respect our strategy of resistance and uphold the highest standard of respect for the human rights of the indigenous oppressed Palestinians people.  Brave decisions need to be taken in support of Palestinians by refusing Israel a platform to whitewash its war crimes and violations of the rights of the Palestinians. The EBS International Documentary Festival has a proud history of supporting independent and progressive documentary filmmakers. It must not become yet another tool for Israel's apartheid public relations machine.

August 11, 2014
/ By
Palestinian Campaign for the Academic and Cultural Boycott of Israel (PACBI)
/
South Korea