July 1, 2020
/ By
Palestinian Campaign for the Academic and Cultural Boycott of Israel (PACBI)
/

Join us for a discussion with Black and Indigenous activists and scholars involved in struggles against racism and settler colonialism from Hawaii to Samoa, First Nations, Black America and Palestine. Moderated by Assistant Professor Noura Erakat. 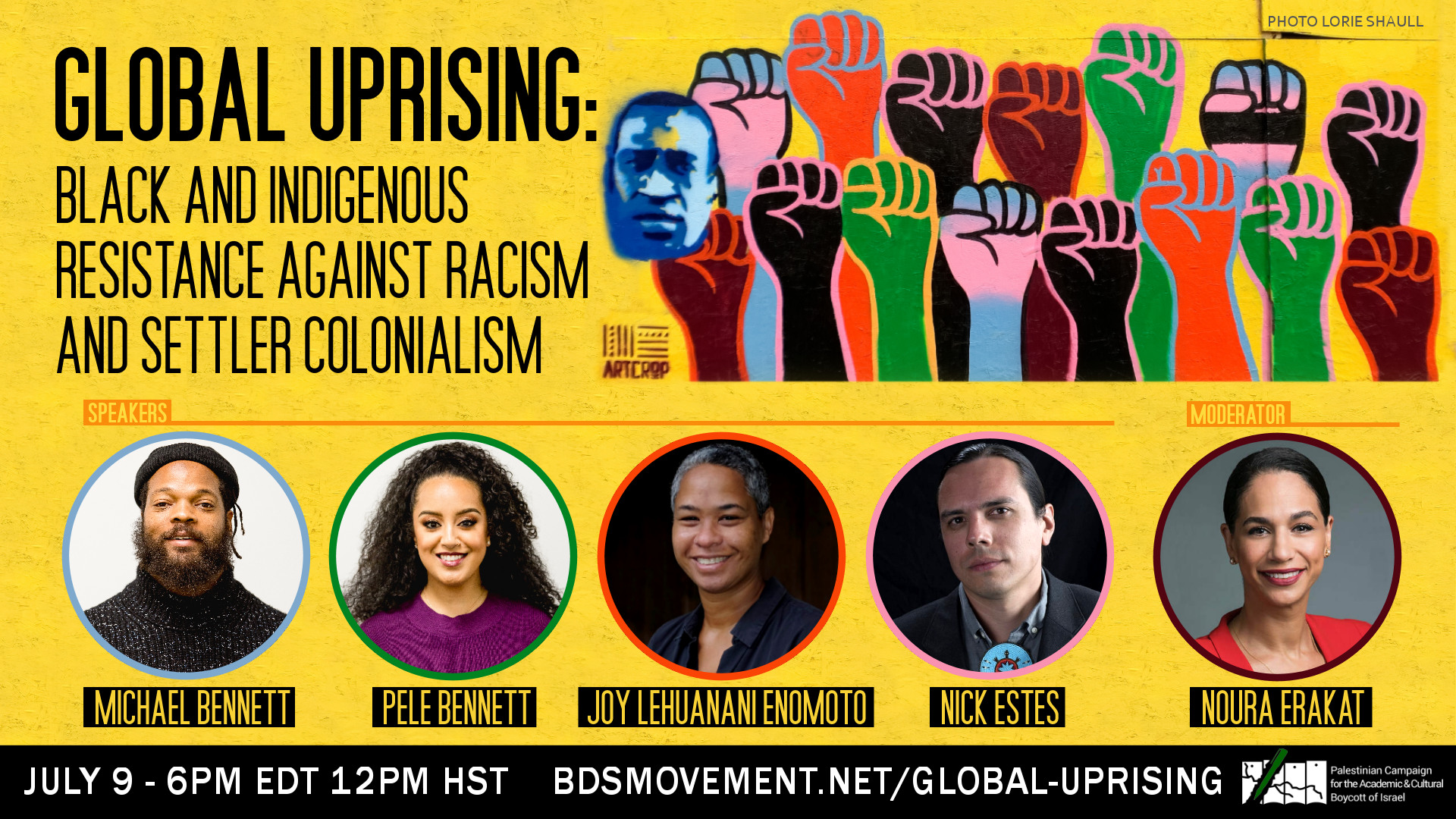 The current uprising against state violence and white supremacy sparked by George Floyd’s murder in Minneapolis has inspired a global revolt against systems of oppression and forced a historic reckoning with racism, traversing sports, culture, academia and corporate boardrooms.

The COVID-19 pandemic had already laid bare existing structural disparities and inequities that have made the impact of the virus disproportionately severe for Black and Brown peoples, Indigenous populations, migrants and the incarcerated.

Join us for a discussion with Black and Indigenous activists and scholars involved in struggles against racism and settler colonialism from Hawaii to Samoa, First Nations, Black America and Palestine. We will examine the intertwined structures of oppression, pay tribute to the power of this moment and the beauty in the wave of solidarity actions and united resistance, and imagine a future of equality and mutual care where no one is left behind.

Pele Bennett is a passionate food advocate, a skilled Polynesian dancer, an activist, co-founder of the Bennett Foundation, and executive producer and host of Mouthpeace.

Joy Lehuanani Enomoto is a Black Kānaka Maoli scholar and activist, an active member of LeftRoots and organizer with the CancelRIMPAC Coalition based in Honolulu, Hawaii. As a social justice activist, scholar and visual artist, Enomotoʻs work focuses on demilitarization, de-occupation and liberation struggles both in Oceania and globally.

Nick Estes is a citizen of the Lower Brule Sioux Tribe. He is an Assistant Professor in the American Studies Department at the University of New Mexico, co-founder of The Red Nation and author of Our History Is the Future: Standing Rock Versus the Dakota Access Pipeline, and the Long Tradition of Indigenous Resistance (Verso, 2019).

The event will be moderated by Noura Erakat, a Palestinian human rights attorney,  Assistant Professor at Rutgers University and the author of Justice for Some: Law and in the Question of Palestine (Stanford University Press, 2019).

The webinar will take place on the 16th anniversary of the historic ruling of the International Court of Justice declaring Israel’s settlement project and Wall in the occupied Palestinian territory illegal. The date also marks 15 years of the nonviolent Palestinian-led Boycott Divestment and Sanctions (BDS) movement for Palestinian rights.