November 2, 2022
/ By
Palestinian Campaign for the Academic and Cultural Boycott of Israel (PACBI)
/

We call on the International Chess Federation (FIDE) to immediately relocate the 2022 World Team Championship away from apartheid Israel to a country not committing war crimes and crimes against humanity. 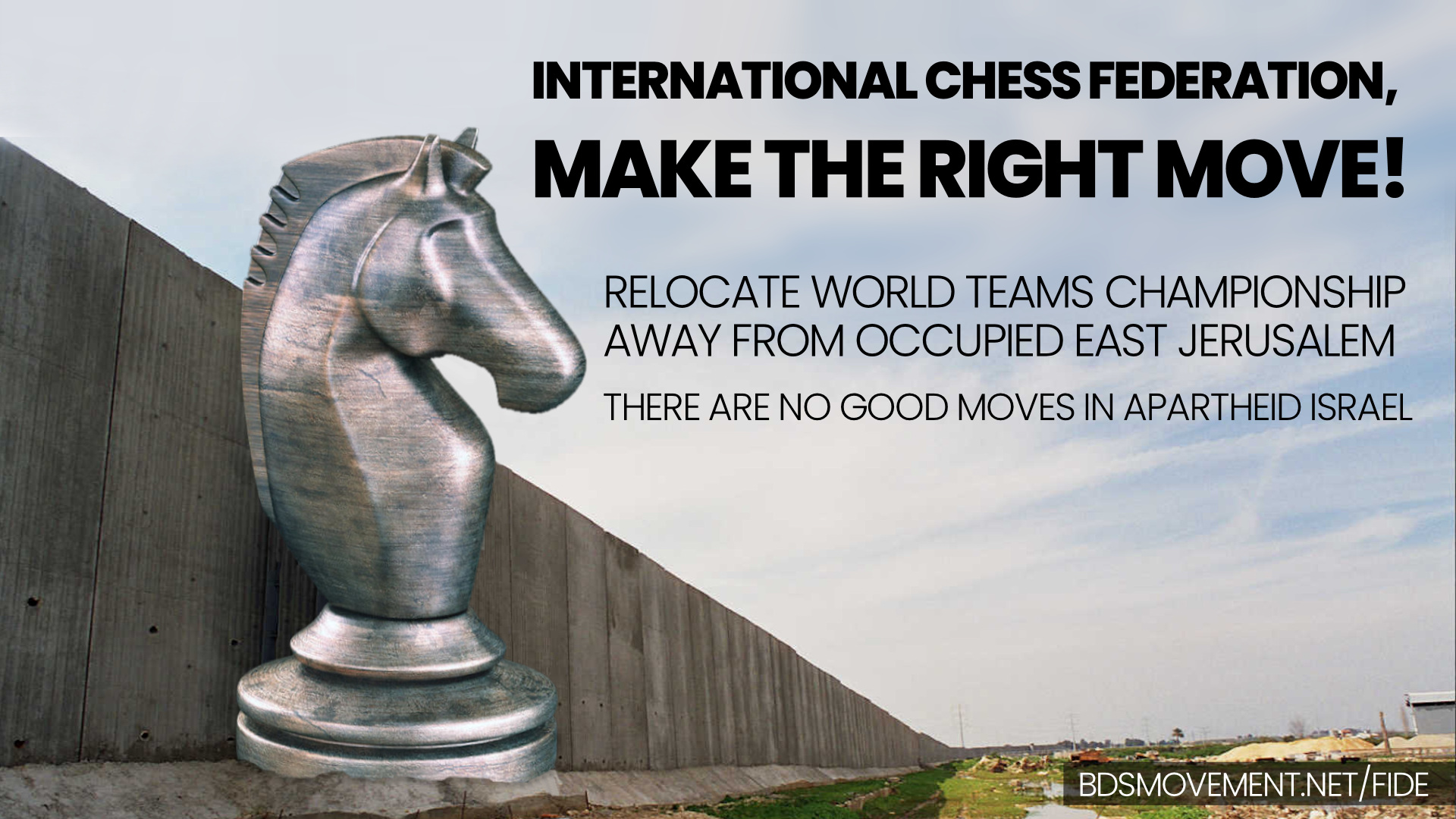 As part of the widest coalition of Palestinian civil society networks and organizations, we urge the International Chess Federation (FIDE) to urgently relocate the 2022 World Team Championship to a country not committing war crimes and crimes against humanity.

Presented as hosted by Israel, the 2022 World Team Championship is set to be held (November 19-26) at the Dan Jerusalem Hotel, which is located in an illegal Israeli settlement in occupied Palestinian East Jerusalem, part of the territory held under Israeli military occupation since 1967. Israel’s illegal settlement regime is considered a war crime under international law.

Israel’s illegal settlements and decades long oppressive military rule over millions of Palestinians are part of what prominent human rights organizations, including Amnesty International, Human Rights Watch, and the Israeli NGO B'Tselem, have all documented to constitute a regime of apartheid, a crime against humanity. Amnesty International specifically urged businesses and organizations to cease activities that “contribute to or benefit from the system of apartheid.”

By holding a tournament anywhere under the control of Israel’s regime of military occupation and apartheid, FIDE is contributing to prolonging Israel’s grave violations of Palestinian rights, its war crimes and its crimes against humanity.

FIDE took immediate steps just days into Russia’s illegal invasion of Ukraine to bar Russia and Belarus from holding official tournaments and their teams from participating in FIDE tournaments.

It is urgent for FIDE to drop this double standard and consistently apply the same principles by holding Israel to account for its decades-long denial of Palestinian rights.

We therefore call on FIDE to immediately relocate the 2022 World Team Championship to a country not perpetrating war crimes and crimes against humanity.

We further call on participating teams and players to support this call by:

As Israel’s apartheid regime escalates its violent crimes against Palestinians, with millions of us, already under military occupation, now under a brutal Israeli military siege (15 years old in the case of Gaza), intensified Israeli army and settler attacks on Palestinians, including children, and widespread ethnic cleansing of Palestinians from their homes, FIDE has no choice but to relocate the World Team Championship if it is to remain true to its charter.