Skip to main content
In the News
This article is reposted from
Al Haq
, click here to read the original article. 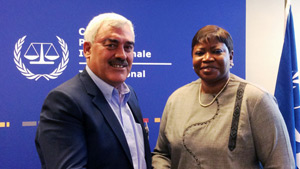 22 November 2016, The Hague: Today, Palestinian human rights groups urged the Prosecutor of the International Criminal Court (ICC) to examine the Israeli closure of the Gaza Strip, which has denied two million Palestinians a panoply of fundamental rights for nearly a decade, as the crime against humanity of persecution under the Rome Statute. The Palestinian Centre for Human Rights (PCHR), Al Mezan Center for Human Rights, Al-Haq, and Addameer submitted a 145-page file to the ICC Prosecutor setting out the factual and legal basis for the case.

Since June 2007, Israel has instituted a comprehensive closure on the Gaza Strip in which it has denied the free movement of people and goods into and out of Gaza, amounting to collective punishment. The Gaza Strip, a constituent part of the State of Palestine, is frequently described as the world’s largest open-air prison.

“The siege on Gaza is unprecedented and is a form of collective punishment. The aim of the closure and the occupation is to de-develop Gaza, to strip Palestinians of their dignity and send Gazan society back to the Middle Ages,” said Raji Sourani, Director of PCHR.“Israel’s absolute control over Gaza’s borders and population has set back generations of Palestinians who cannot travel, access education, receive medical treatment, or engage with the outside world. The ICC must urgently proceed to investigate the crimes against the Palestinian population in Gaza.”

Issam Younis, Director Al Mezan, further stated that "efforts to ease the closure – which is cruel by design and amounts to a crisis of dignity – have been woefully unsuccessful, as evidenced by the ineffectiveness of the Gaza Reconstruction Mechanism. A full lifting of the closure is required and the protection of civilians must be ensured.”

The four Palestinian human rights organizations maintain that the closure of the Gaza Strip has been disproportionate, discriminatory and not justified by military or security purposes. In fact, the current restrictions on the movement of goods and persons into and out of the Gaza Strip are imposed as punitive and persecutory measures. The organizations conclude that a reasonable basis exists to believe that the crime against humanity of persecution is being committed. Persecution entails the denial of fundamental rights on the basis of identity of a group. In this case, the organizations assert that Palestinians are being denied their rights to life and physical security, to work, to education, to health, to adequate food, water and housing, to family life, to travel, to freedom from discrimination, and ultimately the right to dignity.

The Prosecutor is currently engaged in a preliminary examination on the Situation in Palestine in order to determine whether or not to proceed into investigations of alleged crimes committed on the territory of the State of Palestine. Palestine became a State Party to the Rome Statute of the ICC on 1 April 2015, which vested the ICC with jurisdiction over crimes committed since 13 June 2014. The ICC has jurisdiction over genocide, crimes against humanity and war crimes.

To coincide with the submission to the ICC, the Palestinian human rights organizations have prepared an executive summary of the submission and a short documentary video illustrating the impact of the closure on daily life in Gaza.