September 26, 2022
/ By
Palestinian BDS National Committee (BNC)
/
Palestine
In an open letter 55+ Palestinian and European civil society organisations demand that the EU rescinds its decision to renew the EU-Israel Association Council that will greenlight Israeli violations. 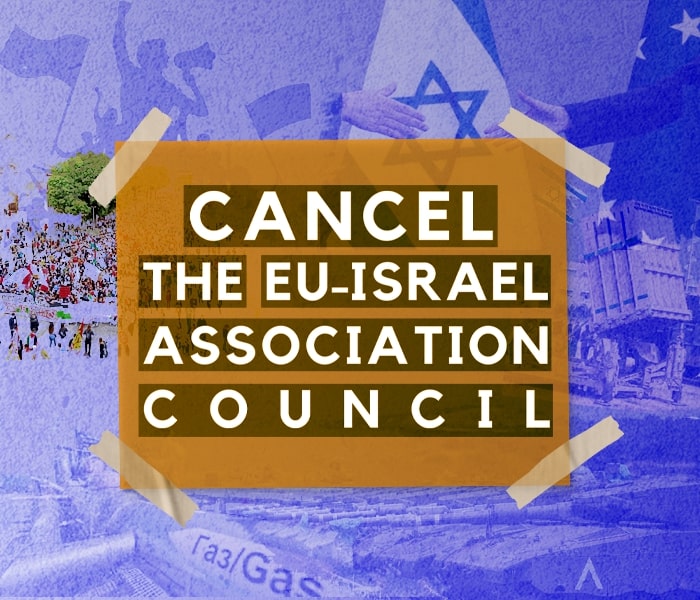 The undersigned Palestinian and European civil society organisations address this letter to you to express our deep concern regarding the decision to renew the EU - Israel Association Council (hereinafter “Association Council”), which seeks to resume formal dialogue and strengthen cooperation with Israel and mainstream the very problematic “Abraham Accords”.

The EU Commission President Von Der Leyen in her latest visit to the region stated about Israel: “Our shared culture and values have created a deep connection between Europe and Israel…the strongest bond we share is our belief in democracy and in democratic values”. Double standards applied by Europeans towards people facing military occupation, annexation and war crimes is evident and unbearable for the Palestinians. Today more than ever, the founding principles and values of freedom and justice that have shaped the international order and adopted by the European Union must be applied and maintained everywhere.

Instead, the Association Council will further normalise authoritarian and oppressive practices instead of democratic values and human rights, and omitting the entrenching violations under international law that are being committed against the Palestinian people.

The Association Council is planned to reconvene at a time where Israel has intensified  its attacks against the Palestinian people, and including European citizens. Already 94 Palestinians have been killed by the Israeli military in the occupied West Bank since the beginning of the year, without anyone being held accountable. Over the past few months, the Israeli military has repeatedly invaded Palestinian refugee camps and cities including Jenin and Nablus in the occupied West Bank, killing more than 27 Palestinians in Jenin alone. Those illegal raids have led to the targeted killing of the journalist Shireen Abu Akleh in May 2022, whose family continues to seek justice and accountability.

On May 4th, the Israeli High Court greenlighted the mass expulsion orders of more than 1,300 Palestinians across eight communities in Masafer Yatta, in the south of the occupied West Bank, and demolitions have already started to take place, paving the way for further land theft and Israeli annexation. These orders amount to the single largest expulsion operation carried out by Israel since 1967. Since then, the EU and its members states have regularly reiterated the illegality of both the expulsion operations and of the Israeli settlement enterprise built on stolen Palestinian land, but in practice it fails to adhere to its own obligations under international law.

Furthermore, the EU is Israel’s largest trade partner, and by allowing European companies, governments and financial institutions to continue trade with the Israeli illegal settlement enterprise, the EU not only maintains but emboldens the very existence of these war crimes, further financing the Israeli theft of Palestinian land and natural resources.

In June 2022 the Gaza Strip marked 15 years of being under suffocating air, sea and land blockade and closure. Between 5-7 August 2022, Israel waged an unprovoked military offensive against Gaza, conducting a series of heavy airstrikes on densely populated areas and deliberately targeting civilians and their homes. During the 3-day offensive, 49 Palestinians were killed, including four women and 17 children, while another 360 were wounded, including 151 children and 58 women.

The EU has also signed a new gas deal with Israel and Egypt as part of the policies that aim to streamline the very problematic "Abraham Accords" into EU approach with its neighborhood and integrate Israel into EU energy supply strategy. Israel has been systematically preventing Palestinians access to gas off the coast of Gaza while maintaining the blockade and promoting its own gas exports. The new gas deal is among the EU’s new Southern Neighborhood policy projects that seek to streamline the “Abraham Accords”, serving authoritarian interests and further undermining Peoples' right to self-determination.

This is the reality from which EU's decisions are disconnected. Deepening the EU-Israel dialogue, as frank as some EU Member States wishes for it to be, rather than holding the latter accountable through meaningful actions, continues to treat Israel as a good faith actor as opposed to a “bad faith occupier”, as accurately described by the former UN Special Rapporteur Michael Lynk.

Instead of allowing Israel to entrench its colonial enterprise and apartheid regime, rewarding it with further economic cooperation and trade of harmful military equipment and technologies, the EU and its Member States have an obligation, and interest, to hold Israel accountable and put an end to impunity.

We thus urge the EU to review its decision to revive the Association Council Meeting, stop the recently signed gas deal and review its bilateral cooperation programmes, to hold Israel accountable for its persistent crimes and human rights violations committed against the Palestinian people