10 UK unions have issued a statement condemning Israel's ciminalisation of six civil society organisations, which the unions say fits the international legal definition of apartheid and should be viewed in such context. 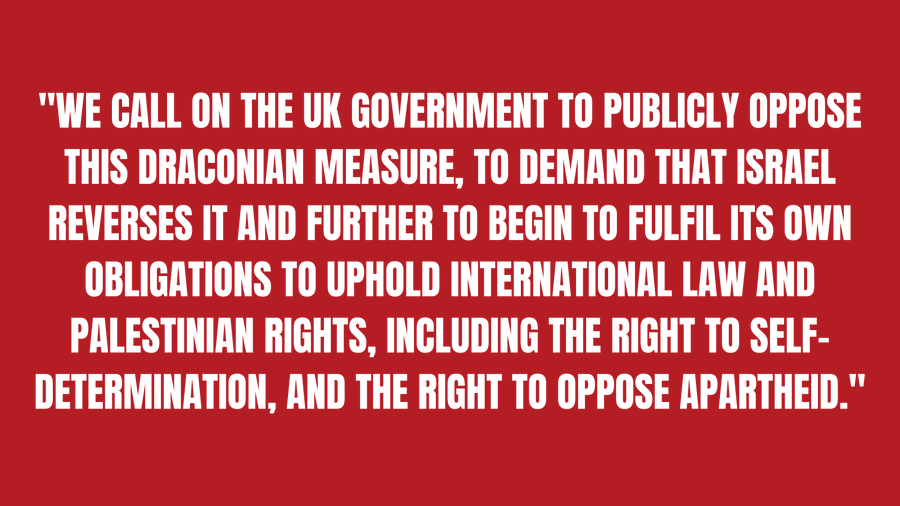 This attack is a brazen attempt to further restrict Palestinian rights and to silence and punish Palestinian human rights defenders already working against incredible odds. We note that the six organisations targeted are amongst those most effectively documenting Israel’s systematic violations of Palestinian rights, including the building of illegal settlements on stolen Palestinian land, attacks on Palestinians’ right to food sovereignty, and the illegal arrest and detention of Palestinians, including children. These organisations have made their voices heard internationally, including in the International Criminal Court and in UN forums, and they are undoubtedly targeted for that reason. Smearing, attacking, and banning the most vocal proponents for accountability and justice is a classic move for repressive regimes. It is a threat to the Palestinian people and to human rights defenders everywhere.

In the past year, human rights experts including Human Rights Watch and B’tselem have echoed what Palestinians have been saying for decades: that Israel’s control over Palestinians includes elements of the crime of Apartheid. The international legal definition of apartheid specifies that it includes the ‘persecution of organisations and persons, by depriving them of fundamental rights and freedoms, because they oppose apartheid.’ This blanket designation and banning of some of Palestine’s most vocal human rights and civil society organisations should be seen in this context.

This move is an attempt to cut off international solidarity by isolating Palestinians and delegitimising their crucial work. As trade unionists and campaigners for justice, we know all too well how repression and silencing works, and we also know how to stand up against it: by redoubling our commitment to stand with the Palestinian people, and in particular, the courageous human rights defenders criminalised for calling for freedom, justice, and equality.

We call on the UK government to publicly oppose this draconian measure, to demand that Israel reverses it and further to begin to fulfil its own obligations to uphold international law and Palestinian rights, including the right to self-determination, and the right to oppose apartheid.