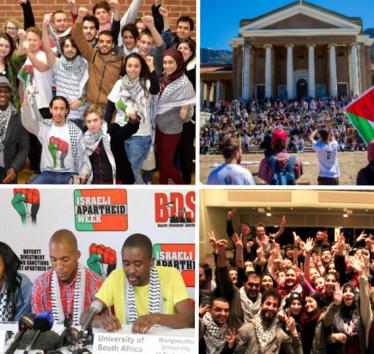 Tune in on October 4 for a live conversation with students at the forefront of campus organizing for Palestinian rights.

19 April 2015 - We the undersigned Palestinian student unions and youth groups wish you a successful conference. We salute your struggle for a more democratic form of education - one that is based on the needs and aspirations of its student body and faculty, and not on the needs of corporate power.

April 19, 2015
By:
Palestinian BDS National Committee
In the News

August 21, 2014
By:
Palestinian BDS National Committee
In the News

The UK's National Union of Student's Black Students conference has endorsed the Palestinian call for Boycott, Divestment and Sanctions (BDS) at their national conference at the University of Warwick.

The National Union of Student’s (NUS) National Executive Council has unanimously adopted a proposal mandating the body to work with local Student Unions to lobby universities to cancel contracts with Eden Springs.

Recommendation 404 (p.68 of this PDF) describes how Israeli company Eden Springs has a bottling plant in the Occupied Golan Heights, and notes the illegality of settlements under international law.

404 finishes with the following paragraph (my emphasis):

A statement released today signed by more than 100 student leaders in the United Kingdom condemns a recent decision by Zefat Academic College that effectively bars Palestinians from running for election for the post of student union president.

May 9, 2012
By:
Maureen Clare Murphy on Electronic Intifada
In the News

Documents obtained by the Scottish Palestine Solidarity Campaign show how a subsidiary of an Israeli company operating in Britain turned successfully for help from the Scottish Government to deal with what the Israeli company called “a wave of protests...that is threatening the future of Eden Springs UK”.

The contract cancellations had created a “pressing situation” for the subsidiary of the giant Israeli multinational water cooler company.

We, Palestinian students and youth organisations, were shocked and disappointed to learn of your all expenses paid junket to Israel, involving prominent Labour party student activists and organised by the Union of Jewish Students.[1] By being involved in this propaganda tour, you have crossed a picket line established by the entirety of the Palestinian civil society.

The 2005 Palestinian civil society call for boycotts, divestment and sanctions (BDS) is a call for

January 24, 2012
By:
Palestinian student and youth organisations
In the News

In a historic move, the National Union of Students (NUS) in the UK has thrown its weight behind campaigns targeting companies complicit in Israel’s occupation and breaches of international law.

A new page on the NUS website that went online today calls on students to campaign against the campus presence of Eden Springs and Veolia.

January 6, 2012
By:
Ben White on Electronic Intifada
In the News

A collaboration between King’s College London (KCL) and an Israeli company located in an illegal West Bank settlement has been condemned by the UK’s National Union of Students (NUS), in a significant boost for campaigners.

In a meeting Monday night of the NUS’ National Executive Council (NEC), a motion demanding the “immediate end” of KCL’s research project with Ahava was passed with no votes against.

The NEC motion, noting the “overwhelming” international position on the illegality of Israeli settlements, states that “by collaborating with Ahava, King’s itself has become