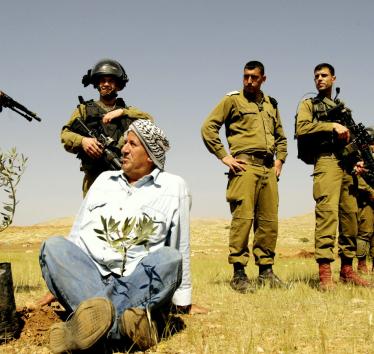 Academic Boycott
September 21, 2018
In the News

In November of last year, the UN General Assembly designated 2014 as the UN International Year of Solidarity with the Palestinian people.

Just three weeks into 2014, the boycott, divestment and sanctions (BDS) movement has again shown that it represents an increasingly effective form of solidarity with the Palestinian struggle for freedom, justice and equality.

This round-up was published in conjunction with a Palestinian BDS National Committee statement looking ahead to 2014.

During 2014, the BDS movement stepped further into the political mainstream and saw major institutions join the boycott, the statement noted.

The former South African ambassador to Israel says he'll be returning a certificate informing him that 18 trees had been planted in his honour in an Israeli forest by the Jewish National Fund (JNF) and the Israeli ministry of foreign affairs.

Ismail Coovadia, whose term came to an end in December last year, told the Mail & Guardian that when he returned to South Africa he opened the certificate, expecting it to acknowledge his period of ambassadorial service but was disturbed to learn that the trees had been planted in his name and without his permission in a forest planted by th

Charity Commission to investigate whether JNF racial discrimination is lawful

On March 21st the Stop the JNF campaign made an application to the Charity Commission for the removal of Jewish National Fund charities from the register of charities.  The application gave evidence that the JNF is racist, complicit in ethnic cleansing of Palestinians and, according to one of its own former directors, an obstacle to peace.  All UK charities are su

An event to be held at a St Andrews hotel, aimed at raising funds for the Friends of the IDF and the JNF, has been cancelled on police advice in the face of serious mobilisations for planned protests.  Palestine activists, human rights campaigners and students joined forces to speak out against the inclusion of Friends of the IDF and the JNF in the list of organisations that will benefit from the fundraiser. 30 March 2013 -- Palestinians are today commemorating with action Land Day, a day in 1976 when Israeli military forces shot and killed six young Palestinian citizens of Israel. These brave youth were among thousands protesting the Israeli government’s expropriation of Palestinian land. Human rights campaigners have accused the Charity Commission of failing to protect the public interest by allowing the charity status of JNF UK to continue.